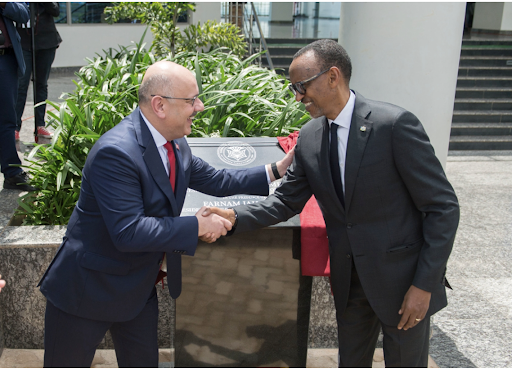 Paul Rusesabagina, 67, is one of these dissidents. The former hotelier protected 1,268 refugees during the Rwandan genocide in 1994. His story later became the subject of “Hotel Rwanda,” and he was awarded the U.S. Presidential Medal of Freedom. On April 4, the Rwandan government maintained the 25-year sentence imposed on Rusesabagina, convicting him of murder, terrorism, and kidnapping — bogus charges, according to human rights groups. His legal advisor, Kate Gibson, called the April hearing a “sham trial.” The U.N. said Rusesabagina’s incarceration was an illegal abduction. Carnegie Mellon said nothing.

Two weeks after agreeing to respond to questions from The Tartan, the university declined to comment.

“Rwanda is a police state and CMU has been operating inside of it for 11 years,” said Tom Zoellner in an interview with The Tartan. Zoellner worked with Rusesabagina to create his autobiography, “An Ordinary Man,” which was published in 2007. “This is a country where mild critics of the president are dealt with very harshly. They take great pride in kidnapping and killing their opposition. My co-writer [Rusesabagina] was tortured.”

Human Rights Watch reported abductions and imprisonments of political dissidents, commentators, and poets under Kagame’s regime. Without transparent media outlets, many have turned to YouTube to create and consume accurate information. Commentators on the platform have received threats and bribes from the government to bolster its image. Refugees fleeing Rwanda for political asylum have disappeared. If they resurface, it is often back in Rwanda, where they are promptly imprisoned.

Though he did not respond to specific questions, President Jahanian did make a statement to The Tartan: “Our CMU-Africa campus reflects Carnegie Mellon’s commitment to a global mission and to our role as educators, knowledge creators and engines of economic impact. We continue to be the only top U.S. research university in Africa that offers its degree programs with full-time faculty, staff and operations. Over the past decade, our campus in Africa has embodied the power of education to change lives, creating transformative opportunities for our students and helping drive the digital transformation of the continent.”

CMU-Africa, which began in 2011, opened its official campus in 2019. The Kigali campus cost $10 million and was funded by the African Development Bank. It offers masters degrees in electrical and computer engineering, information technology, and engineering artificial intelligence. Roughly 230 students are enrolled in CMU-Africa, which hopes to expand to 400 students “in the next couple years,” the university said in 2021. Carnegie Mellon employs 235 people in sub-Saharan Africa. Because administrators declined to comment, The Tartan is unable to confirm that these employees work at CMU-Africa. However, considering the university has not announced any other operations in the region, all these employees likely work at the Rwanda campus. This would mean more people are employed by CMU-Africa than those enrolled. In Pittsburgh, the number of students is more than double the number of employees.

According to Zoellner, one of the reasons Carnegie Mellon carries such a large stake in Rwanda is that it inflates the country’s image. “This is a really cold-blooded arrangement,” Zoellner explained. “Rwanda gets to look progressive and modern. And it’s using CMU to do it. … CMU also gets to look progressive and makes money by charging Pittsburgh tuition in sub-Saharan Africa.” It is unclear what the government’s current relationship is with the university, though the question was posed to multiple administrators.

“The [Rwanda] campus is doing a lot of good; people are getting educated,” Zoellner said. “But what is Carnegie Mellon doing to ask Rwanda to be more in line with a basic standard of human rights? … It’s hard for me to believe that CMU endorses repression of freedom of speech and extraterritorial assassinations.”

In August 2020, Rusesabagina was living as a permanent resident in the U.S. when he was convinced — language varies; some reports say he was tricked, others that he was lured — to board a plane to the United Arab Emirates. From there, he was taken — some reports say kidnapped, others say extradited — to Rwanda. He was blindfolded, tortured, and handed a 25-year sentence by the government. The hearing in early April deliberated if his prison time should be lengthened and decided against its extension. At 67, “Whether he gets a life sentence or 25 years is so far from our focus,” Gibson told The New York Times. She and Rusesabagina’s family are concerned about his survival on a week-by-week basis.

In 2019, Carnegie Mellon invested $18 million into sub-Saharan Africa. Where these funds were allocated — in terms of country and organization — are not included in the university’s 990 form from tax year 2020. Comparatively, the university did not report any investments in MENA, the Middle East and North Africa, where its Qatar campus is located. Charles Kennedy, Carnegie Mellon’s Chief Investment Officer, did not respond to requests for comment.

“I’d like to see the top administration bring some of these concerns to the Rwandan government. And perhaps some sort of change — a condition of CMU’s continuing involvement,” Zoellner said. “I don’t have any illusions that Rwanda is going to say, ‘Oh, okay, we’ll change things immediately.’ … But then the serious question has to be asked: Can the university ethically stay in a totalitarian regime?”

Zoellner reached out to Carnegie Mellon leadership multiple times, but never received a response. The Tartan had a similar experience when making requests for comment. “I understand you had some questions regarding CMU's relationship with the Rwandan government,” Director of Media Relations Peter Kerwin wrote to The Tartan. “If you want to send those to me, I can get them to the right people as quickly as possible.” Two weeks and four response requests later, The Tartan was told the university was no longer interested in commenting.

CMU-Africa’s associate director of marketing and communications seemed open to sending answers. “Nice to e-meet you. Thank you for reaching out,” Monica Sumbi wrote to The Tartan. “Sure, I will answer your questions and send the answers back before your deadline.” After the deadline passed, The Tartan followed up. No response.

When Kagame visited Carnegie Mellon’s main campus in 2011, students and resident Pittsburghers protested his arrival. The announcement of Rwanda’s branch campus came a year after Reporters Without Borders ranked the country 169 of 178 countries reviewed for its freedom of press index. The protest was organized by a coalition of students from Rwanda and surrounding countries, The Tartan reported. “Wanted for war crimes against humanity,” one poster read, an image of Kagame’s face printed alongside the text. “FYI, Kagame: THIS is how democracy looks,” another one said. “FREEDOM of SPEECH!”

A counter-protest, attended by many Rwandans, was held in front of the Cohon University Center. Protesters in this group felt Rwanda was headed in the right direction, and the university’s branch campus would be a continuation of this progress.

“Those within the university should really ask some tough questions,” Zoellner said. “Is it really worth it to be in business with Paul Kagame?”