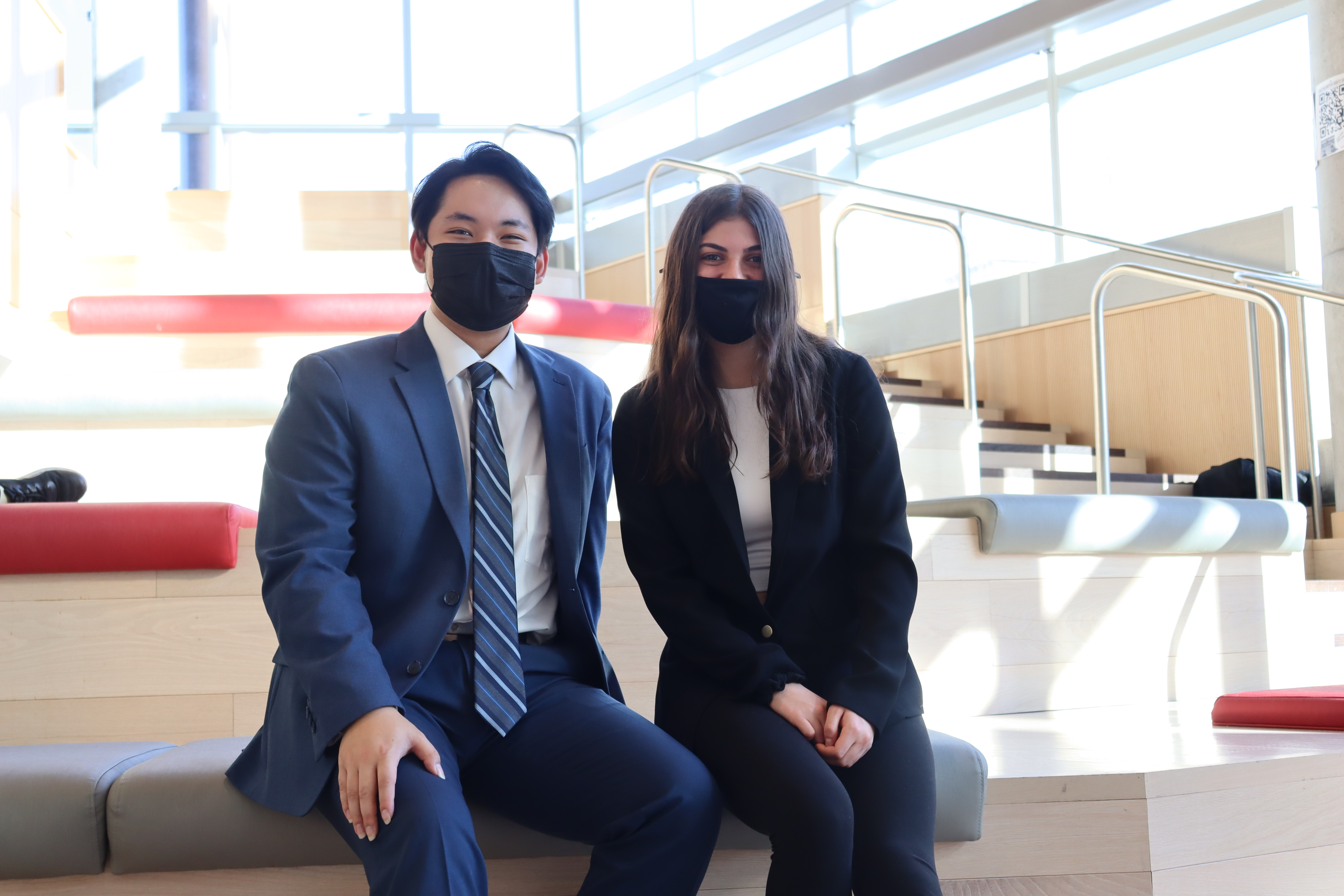 Jacob Chan, a sophomore in the Civil Engineering and Public Policy program, is a member of the ASCE (American Society of Civil Engineers), Phi Delta fraternity, CMU Fencing Club, Roosevelt Club, and Taiwanese Student Association, and was an Orientation Counselor. In his letter on the campaign Instagram account, he explains that joining Carnegie Mellon in the middle of a pandemic left him struggling to find a place, and that he wants to “extend love and advocacy to the CMU community that struggles silently and is often left unconsidered.”

Sarah Abrams, a sophomore majoring in Technical Writing and Communications, is an active member of the Carnegie Mellon student body. She is the former Director of Recognition on the Committee of Student Organizations, a representative on the Humanities Scholars Program Steering Committee, founder of the English department’s Writing Academy, and a member of Kappa Alpha Theta, and CMU Debate. According to the campaign's Instagram page, she is “extremely passionate about student mental health and wellness,” and runs the "Sincerely Sarah" program on the @carnegiemellon Instagram account.

Chan and Abrams have been sitting daily on the Cut with a sign labeled “Table Talk w/ Jacob Chan” listening to students' issues. The pair lists “Representative Governance,” “Inclusion, Diversity, and Equity,” “Student Experience,” and “Environmental Stewardship” (RISE) as the central platforms of their campaign.

On the topic of “Representative Governance,” Chan characterizes his appeal as being “exceptionally proactive in making sure your voice is heard,” and pledges to increase the Carnegie Mellon administration’s accessibility. He repeatedly stressed the disconnect that he feels between the Board of Trustees and the student body. Explaining that the members of the Board of Trustees are all aged 60-75, Chan believes that there should be undergraduate and graduate board members. Abrams continued, "It is very hard for us to make changes with student representation on the Board of Trustees. We were walking around campus the other day and noticed signs that are demanding change from administration. It's very disheartening to see that people are afraid to put their names and their faces with those remarks."

“Inclusion, Diversity, and Equity” (DEI) are important parts of the Chan/Abrams campaign. They write about ways to help students on campus with $200 DEI grants for student organizations, which Abrams sees as a way to help students build clubs for less popular subjects the way she did. Additionally, they pledge to fight for a $15 minimum wage for TAs, and help graduate students form a union so they could fight for a wage increase. Chan explained that they would also like that wage increase to be for student workers, but that they do not think it would be feasible:

“We've recently talked to the current president of GSA, who has been fighting this issue for his entire term … They have very pessimistic views about the idea of striking and other really, really rash social movements because so many of the graduate school population are international and they rely on work visas. It's not practical for them…because if they stop working, they immediately get deported. Our path forward, hopefully, is some sort of unionization and really bringing it all together. The National Labor Relations Board now classifies graduate student workers as workers and not students, meaning they can now unionize. Columbia recently formed their own [union], which gives us a lot of heart … We are really, really heavily advocating for the graduate student union side of it. It's not going to be something that the Undergraduate Senate can handle alone. We need to be united on all fronts, and we're going to be advocating for a solution.”

When asked about diversity within their campaign and on campus, Abrams acknowledged that it was impossible to fit every label, saying that their campaign had a diversity of thought, and that they wanted to work with an expansive coalition to get work done once elected, saying, “We don't want to make a bunch of promises which are the populist view and not be able to accomplish anything. Everything you see in our platform, we have spent hours discussing among our coalition. Among student body executives, professors, academic advisors, and the list goes on.”

They are concerned about the 14-week semester that has recently been approved, which they say "places significant and undue emotional burdens on faculty and students for equal work with less time and resources.” They mentioned the importance of extending housing deadlines and increasing support for the Carnegie Mellon mailroom. Their main point on student experience has been one of unity. Chan shared an anecdote of being bullied by seniors as a first-year, and explained how he wanted students to have more interactions and be more comfortable with each other.

The final pillar of their campaign is “Environmental Stewardship.” They want to create an Office of Sustainability that would advise departments within the university on environmental practices. Chan and Abrams would also like to create a stipend allowing students to use Pittsburgh’s bike share system (recently rebranded as POGOH for free or a reduced cost. They particularly focus on divestment from fossil fuels. They want to follow the Green Bank Model and use the university’s substantial endowment to invest in sustainable interests.

Chan and Abrams’ goal is to build a program that will last past their term. When asked about what they want their legacy to be, they explained, “We want to give tools for future generations at CMU to be able to fight, handle and shape the administration in the way that they want. It's not just about tuition … Having access to the board of trustees is a direct representative from the student body to administration, which means that they hear our point of view on things … This would give future social movements and future university movements the power to change things ... That's why we talk about this being a multi-administration thing. The ultimate legacy is destroying the perception that students can't do anything or that the Student Body President or Vice President can’t do anything.”

In their final message to voters, Chan thanked the student body: “We are going to do our best to run a kind and inclusive campaign. ... We want to see meaningful change, which means that our campaign will not be centered around our personalities. You will not see us … advocate for ourselves so much as advocate for different perspectives and our issues. Our campaign will be focused on … the new things that we are trying to bring to this university. Moving forward is not going to be just us and our resources, but the university and the student communities speaking out about these resources together.”

Abrams added, “If you think that the student government doesn't do anything, that is the exact reason you should vote in this election because with us in office, our primary goal will be to make sure you can do something within your student body.”