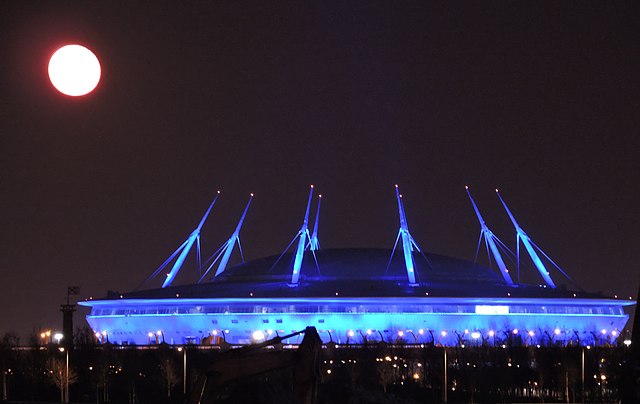 All 32 teams in the UEFA Champions League group phase will be vying for a spot in the final, which will be held in the Gazprom Arena in St. Petersburg. (credit: Photo courtesy of Monoklon via Wikimedia Commons)

Shakhtar Donetsk vs. Inter Milan
Although both of these teams are coming from Matchday 1 losses, Inter Milan still has some momentum left over after being crowned the champions of Serie A back in May. Milan also played very well against Real Madrid, nearly holding the La Liga table-toppers to a draw. In contrast, Shakhtar looked disorganized against Sheriff, their messy and tired-looking defense conceding two goals. While these two have historically drawn often and have had similar performances in their last five matches, I would say that Inter Milan has pretty good odds to move up the Group D table.
Prediction: Inter Milan wins 3-0

Ajax vs. Besiktas
This match is a tougher one to call. While Ajax has historically done well against Besiktasş (along with fellow countrymen Fenerbahçe), having won all four of their previous meetings in European competition, this is their first time playing each other in nearly two decades. Furthermore, members of the Turkish Big Three have improved significantly in recent years, with Fenerbahçe having held Ajax to a draw, before winning in their second group stage meeting back in the 2015/16 season. However, given both teams’ performances in their last five matches leading up to their Tuesday clash, Ajax looks like they have the edge in terms of momentum.
Prediction: Ajax wins 2-1

Real Madrid vs. Sheriff
Despite Sheriff becoming the first Moldovan side to qualify for the Champions League group stage and having won their first game against Shakhtar Donetsk, they are still far from matching Real Madrid in terms of fame and resources. With Real’s domestic momentum, sitting at the top of La Liga after losing the top spot to Atlético Madrid by just two points last year, Sheriff would need something special to overcome the Spanish giants. The odds, for now, are solidly in Real Madrid’s favor.
Prediction: Real Madrid wins 2-0

AC Milan vs. Atlético Madrid
Although AC Milan fielded a loss on Matchday 1 while Atlético drew, it’s arguably a little more impressive to lose 3-2 to the current Premier League table-toppers Liverpool away (but still earn two away goals) than to draw at home against a 10-man Porto. Milan’s recent home record is also better than Atlético’s away record, so for this match, I would have to go with the Italian side.
Prediction: AC Milan wins 3-1

Borussia Dortmund vs. Sporting
There isn’t much to debate here. Sporting has never beat Dortmund, and while Dortmund is coming off of a 2-1 victory against Besiktas on Matchday 1, Sporting suffered a 5-1 defeat at the hands of Ajax. Save a miracle, this match is firmly Dortmund’s.
Prediction: Dortmund wins 4-0

PSG vs. Manchester City
This is definitely a match to watch this week, especially if Lionel Messi is fit to play again. Pep Guardiola’s Manchester City has been looking strong this season, just one point shy of the top of the Premier League table, while PSG, unsurprisingly, has a strong grip on Ligue 1. Although both teams are coming in with similar recent performances, City looks like the stronger of the two, having won 6-3 against Leipzig on Matchday 1 as PSG drew to Club Brugge. While Man City may be more fatigued coming off a close 1-0 victory against Chelsea on the weekend, they have the momentum and the tactics to pull off another win.
Prediction: City wins 3-2

Porto vs. Liverpool
Champions League matches with Porto can never be called with certainty. Despite coming into this match as the clear underdog, Porto has pulled off surprise upsets time and time again. Still, Liverpool’s domestic dominance cannot be ignored, and while I think that they have the definite advantage, it would be a mistake to rule out Porto completely.
Prediction: Liverpool wins 2-0

Leipzig vs. Club Brugge
Despite Leipzig coming off of a loss on Matchday 1 and Club Brugge coming off of a draw, I would still bet on Leipzig as the favorite to win this head-to-head. Leipzig’s momentum after putting up a huge 6-0 win over Hertha Berlin on the weekend will make them especially dangerous, and homeside advantage will almost certainly be in effect. Overall, I think this game is in the hands of the Germans.
Prediction: Leipzig wins 2-0

Atalanta vs. Young Boys
Having successfully pulled off a 2-1 upset against a 10-man Manchester United on Matchday 1, Young Boys will be looking to continue their winning streak as Atalanta tries to move up the Group F table. Atalanta will need to be vigilant, especially on their defense, to avoid the same fate as Manchester United. As long as neither side makes serious defensive errors, however, I would say that the two are pretty evenly matched.
Prediction: 1-1 draw

Zenit St. Petersburg vs Malmö
Both of these teams have had similar performances in recent matches, and both fielded losses on Matchday 1 playing against arguably stronger opponents: Zenit conceded a late goal in the second half to Chelsea and Malmö lost 3-0 to Juventus. Considering Zenit’s home record against Malmö’s away record, it seems like Zenit might have a slight advantage in this match, but I would not be surprised if it turns out in Malmö’s favor. Personally, I don’t have a particularly strong conviction in either team walking away with all three points. It wouldn’t surprise me if neither are able to capitalize.
Prediction: 0-0 draw

Wolfsburg vs. Sevilla
Ironically, both of these Group G teams drew on Matchday 1 and ended with 10 men on the field due to a red card. However, Wolfsburg is coming into the match having lost 3-1 to Hoffenheim on the weekend, while Sevilla just won 2-0 against Espanyol. If Sevilla carries this momentum into their Wednesday match, they will have the advantage.
Prediction: Sevilla wins 4-2

Bayern Munich vs. Dynamo Kyiv
Like the Dortmund vs. Sporting match, this one is a no-brainer. Bayern has been strong domestically, especially at home, sitting on top of the Bundesliga table. Furthermore, the Germans comfortably won 3-0 against Barcelona away on Matchday 1 while Kyiv was only able to draw against Benfica. Robert Lewanowski is playing well, and all signs point to Bayern walking away from this game with all three points firmly in hand.
Prediction: Bayern wins 4-0

Salzburg vs. Lille
The other half of Group G, both teams drew against opponents who lost a man in the second half on Matchday 1. However, Salzburg will be coming into the match with a significantly better record in terms of recent performances in comparison to Lille. This, plus the homeside advantage, seem to give Salzburg the edge in this head-to-head.
Prediction: Salzburg wins 1-0

Juventus vs. Chelsea
This is certainly another match to watch. Juventus, coming off of a solid 3-0 win on Matchday 1, will be looking to keep their position atop the Group H table against the defending UEFA champions. The Italians definitely have better morale coming into this match, having won 3-2 against both Sampdoria and Spezia domestically. In contrast Chelsea lost 1-0 to Manchester City on the weekend, and was only able to hold Aston Villa to a 1-1 draw in the Carabao Cup the week before that. With both Dybala and Morata missing the game, however, it seems like Chelsea may have the upper hand in this matchup.
Prediction: Chelsea wins 2-0

Benfica vs. Barcelona
While this match would have been easy to call in past years, Barcelona’s recent performances after losing Lionel Messi have been lackluster to say the least. Sitting fifth in the La Liga table and having won very few matches in the last month, Barcelona’s prowess this season has been uncharacteristically questionable. That being said, Barça should still have the advantage when it comes to each player’s individual performance, but if Benfica is able to take advantage of cohesion and other cooperation-based errors, they could certainly pull off an upset. While Benfica’s chances still seem slim against Barcelona, their recent home record suggests they have a decent chance of toppling the Spanish giants.
Prediction: Benfica wins 2-1

Manchester United vs. Villareal
The ironic thing is that despite only having won one of their last five matches (drawing the other four), Villareal’s recent record is still arguably better than United’s, who have lost three of their last five matches. While Villareal is the underdog coming into this match, United’s loss against Champions League newcomers Sheriff on Matchday 1, along with subsequent losses to West Ham in the Carabao Cup and Aston Villa on the weekend, raise serious doubts about their ability to perform. This, coupled with questions about Harry Maguire and Luke Shaw’s fitness for the Wednesday clash, tip the scales in Villareal’s favor. Unless United is able to pull it together ahead of then and successfully utilize Cristiano Ronaldo to his full potential, Villareal looks like they could slip away with all three points and leave United at rock bottom.
Prediction: Villareal wins 2-0