Ingenuity: a glance at Mars 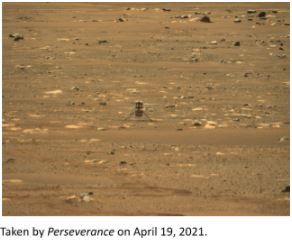 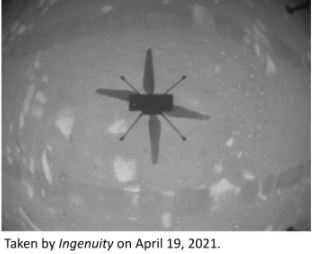 Ingenuity’s first black-and-white photo: Pictured to the left is the first black-and-white photo that Ingenuity took on its flight above Mars’s surface, a flight that proved ground-breaking in the journey to learn more about the red planet. This particular image was taken by Ingenuity’s navigation camera, which captured the helicopter’s own shadow on the surface of Mars from the air. 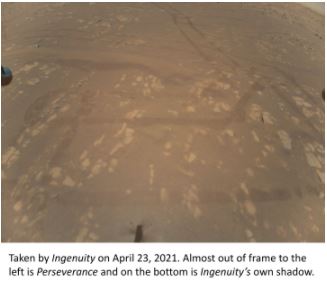 First color image of Mars' terrain captured from the air: This picture taken by Ingenuity’s color camera marked a huge milestone in Mars exploration as this image became the first color image of Mars taken from a device flying above the surface of the planet. Specifically, when the helicopter captured this photo, it was 17 feet (or 5.2 meters) off the ground in the midst of its second flight. A closer look at the image reveals not only the appearance of the terrain of Mars but also the tracks that Perseverance left behind as it explored the planet’s terrain. 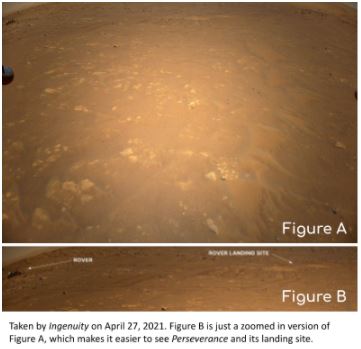 Perseverance in Ingenuity’s image: The image to the right brings a reversal to some of the pictures that came before this: while previously, Perseverance had taken pictures of Ingenuity’s flight, this image shows Ingenuity capturing an image with Perseverance fully in frame. The actual image (Figure A) makes it hard to tell where Perseverance is, so zooming in on the picture (Figure B) proves helpful in indicating where the rover is in the image. Ingenuity took this photo during its third successful flight at about 16 feet (or 5 meters) above the ground. 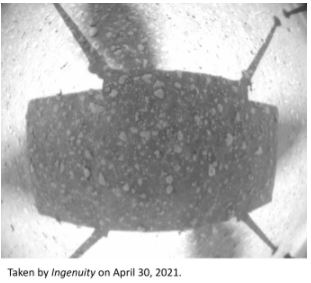 Ingenuity’s take-off image: The photograph pictured to the left was taken by Ingenuity through its navigation camera during its second successful flight. This image depicted very few traces of dust.

To think of a world beyond our own that can potentially support life feels like the plot of a science fiction novel. However, the relentless work of generations of scientists is slowly transforming this seemingly impossible idea into reality with research on Mars. In an effort to bring us a step closer in learning more about Mars, scientists from NASA recently launched Perseverance, a space rover meant to collect data (specifically rock and soil samples) that may suggest the existence of ancient life forms on Mars.

Along with Perseverance came Ingenuity, a drone-like helicopter that was attached to the bottom of Perseverance before its flight to Mars as a technological demonstration. Upon its launch into space, scientists were unsure of whether Ingenuity would successfully maneuver itself through Mars’ extremely thin atmosphere, even after performing many tests on the helicopter before its expedition. Their hard work paid off when the flight of Ingenuity became the first ever powered and controlled flight on a world beyond Earth.

With the help of the photos collected by both Perseverance and Ingenuity’s revolutionary flight on Mars, we can now look deeper into the details of the Martian terrain.