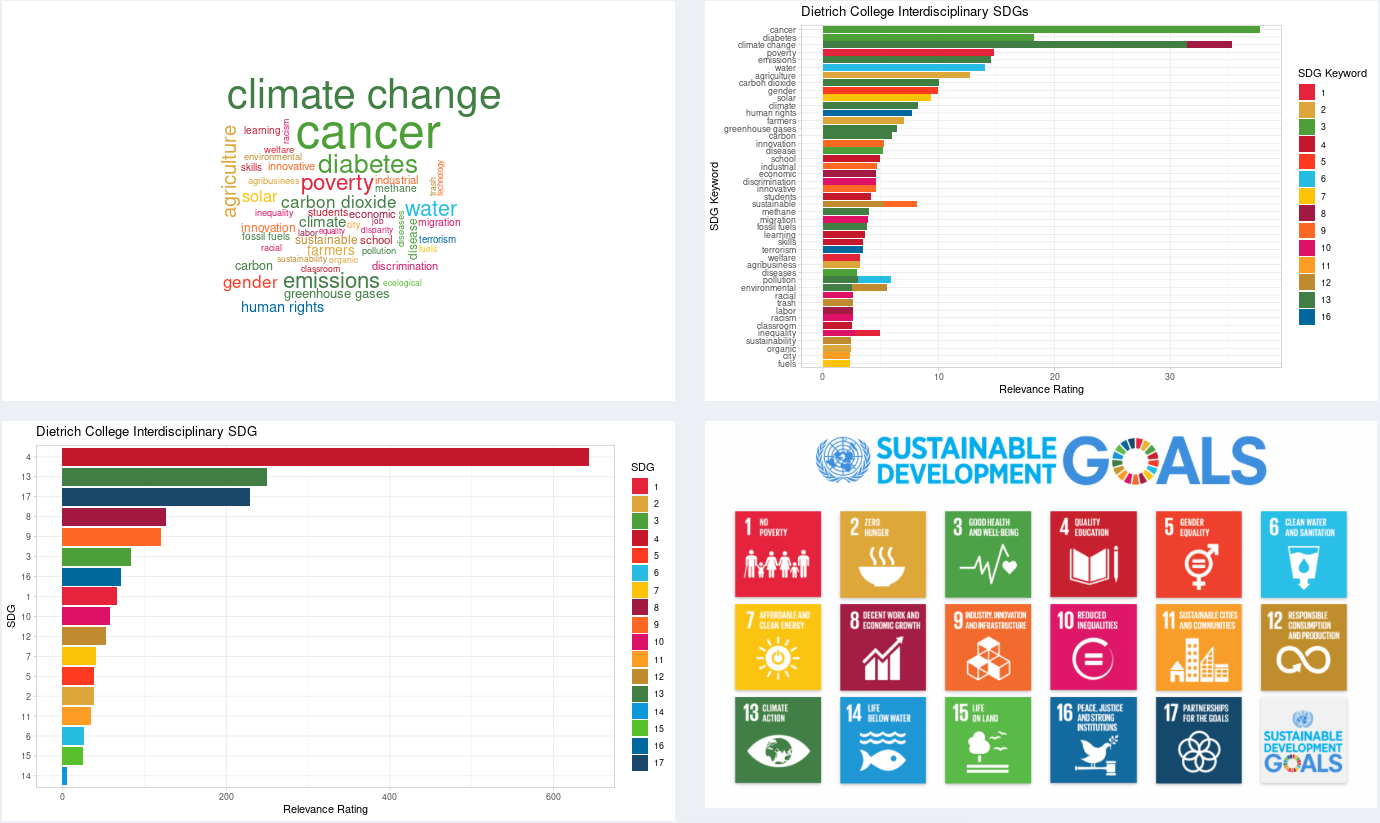 Part of the Voluntary University Review of 2021 was evaluating how different aspects of Carnegie Mellon’s education supported the U.N.’s sustainable development goals (SDGs). The above screenshot is one of several visualizations in an application created for the report called “CMU SDG Mappings.” The above screenshot shows how many courses in Dietrich College have keywords relating to each of the 17 SDGs. The most common keywords found are shown on the top right and the SDGs on the bottom right. SDG 4 is shown as most relevant to the Dietrich curriculum. (credit: Screenshot of https://cmusustainability.shinyapps.io/sdg-mapping/)

How sustainable is Carnegie Mellon really?

Carnegie Mellon followed in the footsteps of the U.N. General Assembly when it established its Sustainability Initiative in 2019 in alignment with the U.N.'s sustainable development goals. In both 2020 and 2021, the university evaluated itself on its progress in furthering these goals through their Voluntary University Review (VUR). VUR looked at the university's education, research, and overall practices, and evaluated how much of each could be associated with each of the sustainable development goals. Unsurprisingly, out of the 17 goals, the investments of the university seem to be furthering the goal of improving the quality of education the most.

Matthew Johnson-Roberson was once an undergraduate computer science student at Carnegie Mellon, and now, he will return in January as the new director of the Robotics Institute after having served as associate professor of engineering at the University of Michigan. Some of his interests include fostering relationships with companies, as well as enabling a space for new perspectives and diverse conversations.

Brain probes are both the stuff of fiction and nonfiction, recording the neural activity in the brain. However, they are also fragile and not practical for many situations, such as when researchers are trying to record signals from the 3D volume of the brain. Researchers in the Next Manufacturing Center are creating brain probes to solve these issues by measuring how much force and pressure the probes experience through different materials.

The United Nations held COP26, their 26th annual climate change conference, from Oct. 13 to Nov. 12 in Glasgow, Scotland. The conference ended in the Glasgow Climate Pact adopted by the nearly 200 countries in attendance. The countries agreed to focus on preventing global warming from going above 1.5 degrees Celsius (2.7 Fahrenheit). The pact also included its first mention of fossil fuels, which they initially resolved to "phase-out," though India later asked for the language to be changed to "phased down."

It was a busy week for SpaceX. On Thursday, it launched the 600th person in space and three others, delivering them to the International Space Station after a one-week delay. They will remain in orbit until April 2022. On Friday, SpaceX test-fired their new Starship SN20, made to launch people to the Moon and Mars. Combined with the Super Heavy 4 booster, it has become the tallest rocket ever at 395 feet. On Saturday, the company launched 53 Starlink satellites into orbit, part of a mega-constellation of 1,844 satellites aiming to deliver high-speed internet to rural and remote areas.

You can now pay to undo Tweets, read ad-free news on Twitter

Twitter has released Twitter Blue, a $2.99 subscription with ad-removal, undo buttons, the ability to edit the navigation bar, and themes. This comes after Twitter bought companies Scroll (which gives users the ability to read articles from participating news websites without ads) and Nuzzel (which gives users the feature that highlights top articles, seen as an improvement to the discovery feed).