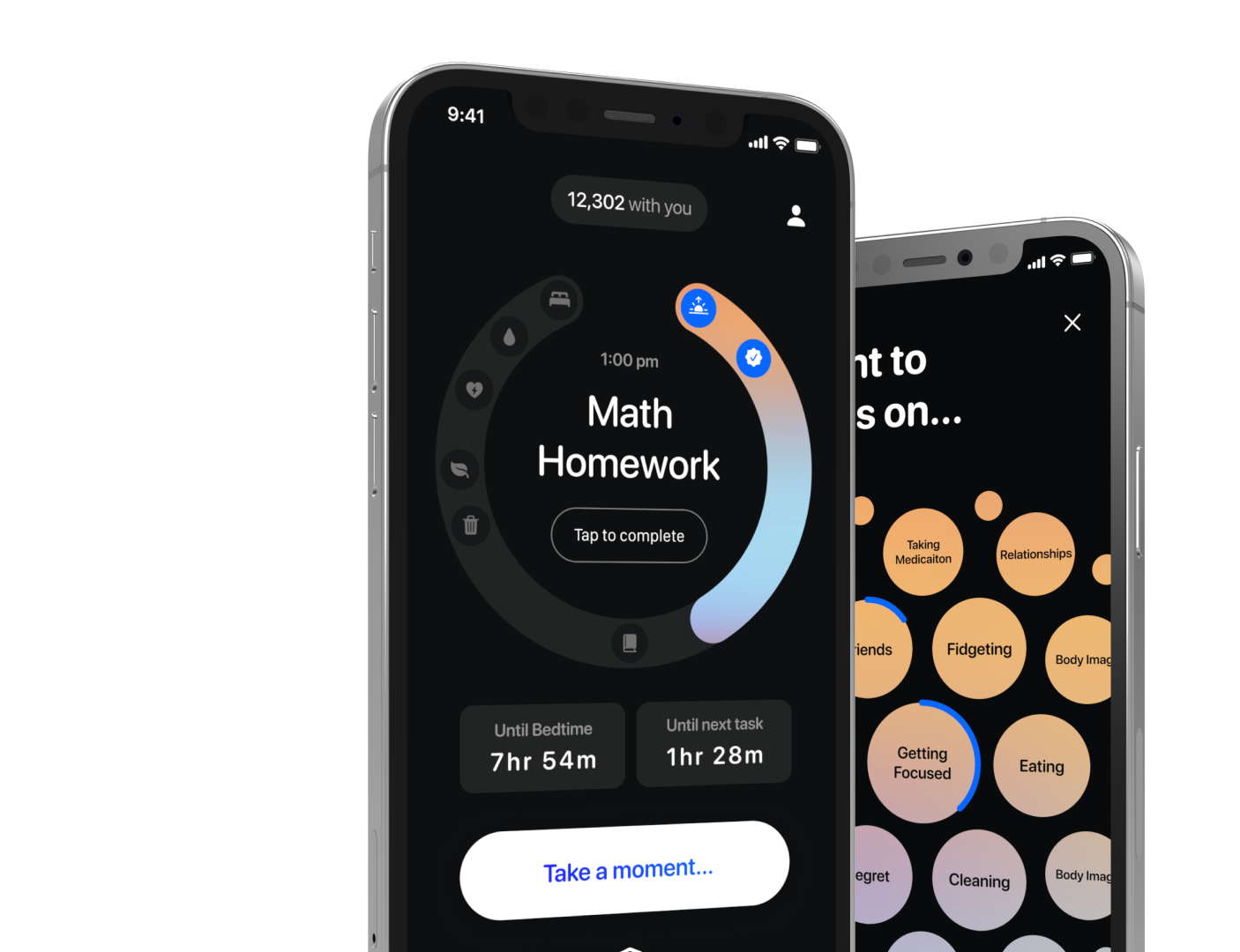 Eachday has given away the free iOS closed-beta model for interested customers, but plans to launch the app in the Apple App Store and Google Play store as a paid app. (credit: Courtesy of Eachday)

Eachday's primary focus is training users with ADHD on executive functioning, which includes decision-making, planning, task management, and organization. The images above display examples of screens that remind users to complete tasks, including taking medicine, doing homework, and practicing active listening. The app is also very user-adaptive, honing in on the individual's preferences, as ADHD patients can often differ in needs. (credit: Courtesy of Eachday)

An American start-up composed of staff from the Pittsburgh and California Bay Area developed an app in October 2018 that could change the way that people with Attention-Deficit/Hyperactivity Disorder (ADHD) manage their symptoms. The app is called "Eachday," a reference to the developers’ hopes that the app becomes an integral part of the users’ daily lives. According to the company’s press report, Eachday plans to provide users with the skills, medical resources, and guidance necessary to self-manage their ADHD on a daily basis. It is intended to complement existing medical treatments for ADHD, including cognitive behavioral therapy (CBT), therapeutic counseling, and pharmaceutical medication.

The app will feature several beneficial tools including a task planner, a daily calendar, a journal for thoughts, short lessons on emotional regulation, and other components targeting areas in one’s life affected by ADHD. These areas include making friends, managing fidgeting, maintaining hygiene, setting goals, and developing good eating habits, all of which contribute to a holistic treatment plan.

However, the main component of ADHD that the developers of Eachday wish to address through their app is executive dysfunction. Executive dysfunction is defined as the range of deficits in executive functioning, which includes (but is not limited to) behaviors localized in the prefrontal cortex. This could range between decision-making, planning, task management, and organization. Founder and Carnegie Mellon alumnus Christian Murphy, along with Eachday’s medical expert Dr. Duke Ruktanonchai, believe that its feature focusing on executive function-related training will contribute to the app’s effectiveness in helping those with ADHD.

The app plans to offer short lessons about training those characteristics, while also trying to turn daily tasks (e.g. going to class, buying a bus ticket) into seamless behaviors that require less cognitive effort for users. When talking in-depth about the strategy behind the short lessons, Murphy explained that there were two pieces in a specific executive-functioning situation: the "task" piece and the "managing the moment” piece, and that there is a gap that must be filled. The “task” piece refers to the situation triggering emotional responses, while the “managing the moment” piece refers to the methods used to manage the responses themselves.

“There are a lot of therapy techniques we can talk about. But when you’re in the moment, you can forget,” Dr. Ruktanonchai said. “Having those techniques in the moment, with the phone, is a totally different approach.”

Eachday is highly user-driven, with the app adjusting itself with the users’ self-reporting and activity within the app. This is important to the developers because ADHD, while having a broad definition in the medical world, has nuances that vary from person to person. In fact, foundational research has proven that there are possibly seven different kinds of ADHD, as opposed to the existing view that there are only three: primarily hyperactive, primarily inattentive, and the combined type. Hence, it is important that ADHD treatment be fluid enough to evolve with the user’s individual needs. And Eachday hopes to do just that. There was even talk of including smart features that offer personalized advice and reminders based on what the user desires help with the most.

As of now, Eachday has created an iOS closed-beta model and is yet to create a model for the Android system. The company has been giving away the app to interested consumers for free. However, in 2022, the company plans to launch the app in the App Store and in the Google Play Store. The price is currently $150.00 for a year or $15.99 per month. While this may seem expensive compared to most other productivity and time-management apps, Murphy states that the app can be a cost-effective alternative to in-person therapy, which can cost almost $400 an hour.

And in an effort to democratize the app and its services, the developers of Eachday would like to include a “buy one, give one” opportunity to help those in disadvantaged communities. With each paid user of Eachday, the developers will be able to donate the app to another user from a lower-income area.

Eachday may also be covered by certain insurance providers after gaining FDA approval. Christian says, "through Carnegie Mellon’s corporate-startup lab (CSL), we have been in conversation with Optum and United Healthcare leadership to plan efficacy research, and have also been working to take part in Optum's startup studio accelerator program."

Murphy has high hopes for the success of Eachday, saying that the app is the first of its kind to treat ADHD in a holistic manner. “There are many tools for kids, ... [and a] slew of time management apps, and we have a competitor focused on CBT” he acknowledged, but also stated that many of these apps “do not reduce the cognitive burden” that comes with having ADHD. By offering specialized training in executive function, along with making one app that replaces several (planners, calendars, and other productivity apps), Eachday hopes to reduce cognitive burden and empower those with ADHD to understand more about their individual situations. The goal of Eachday is to normalize ADHD and remove feelings of inadequacy, instead replacing those feelings with the courage to seek help and take control.