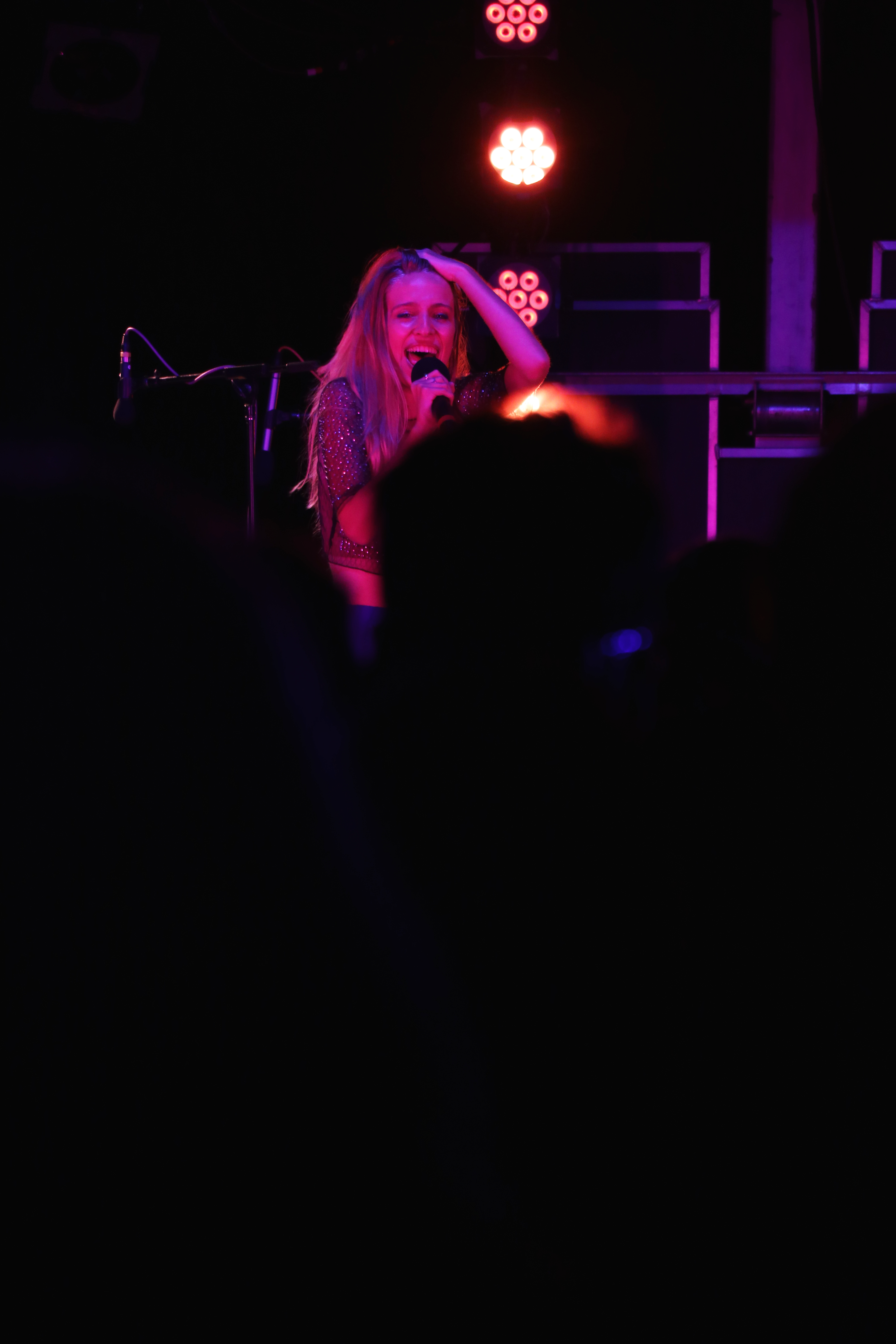 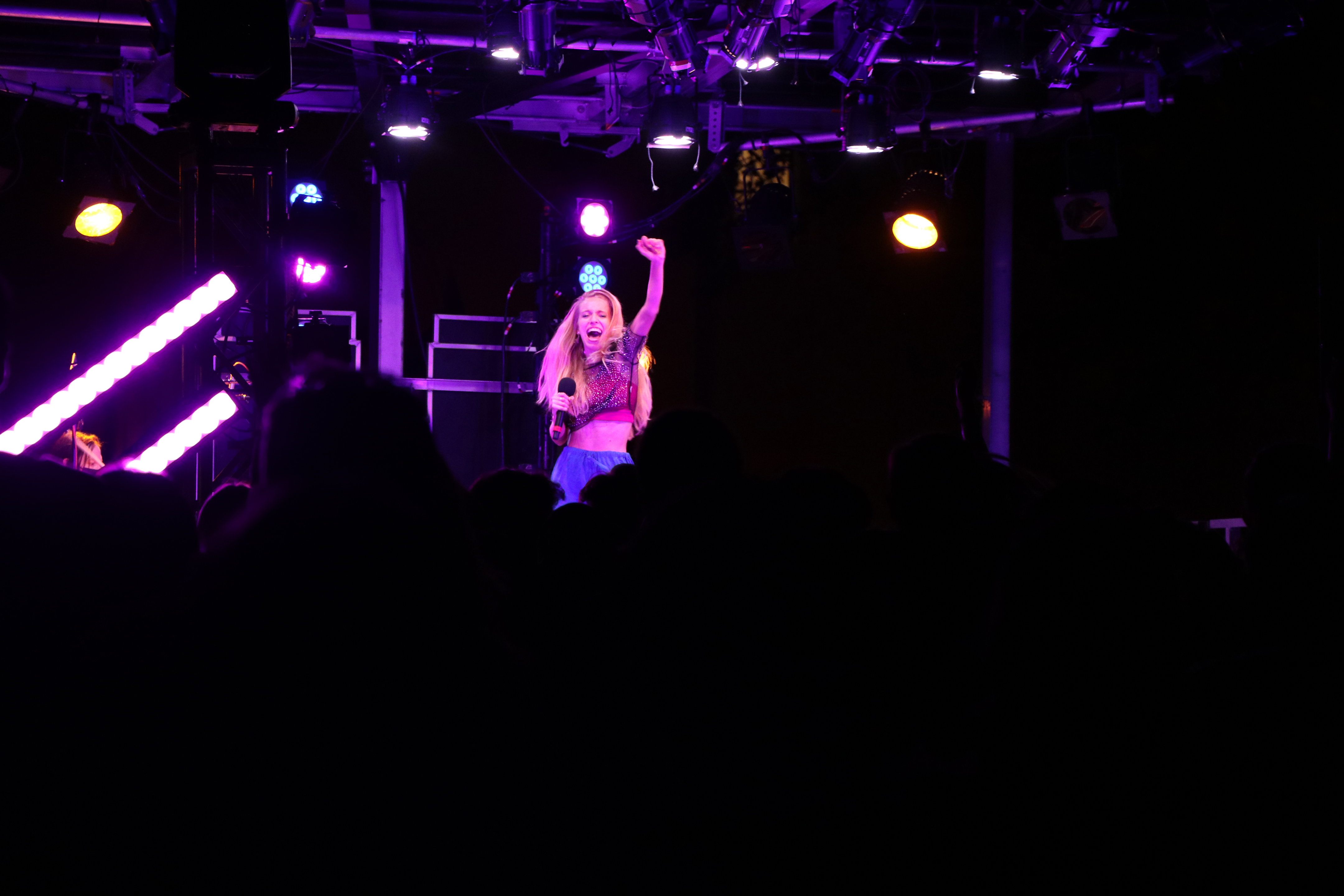 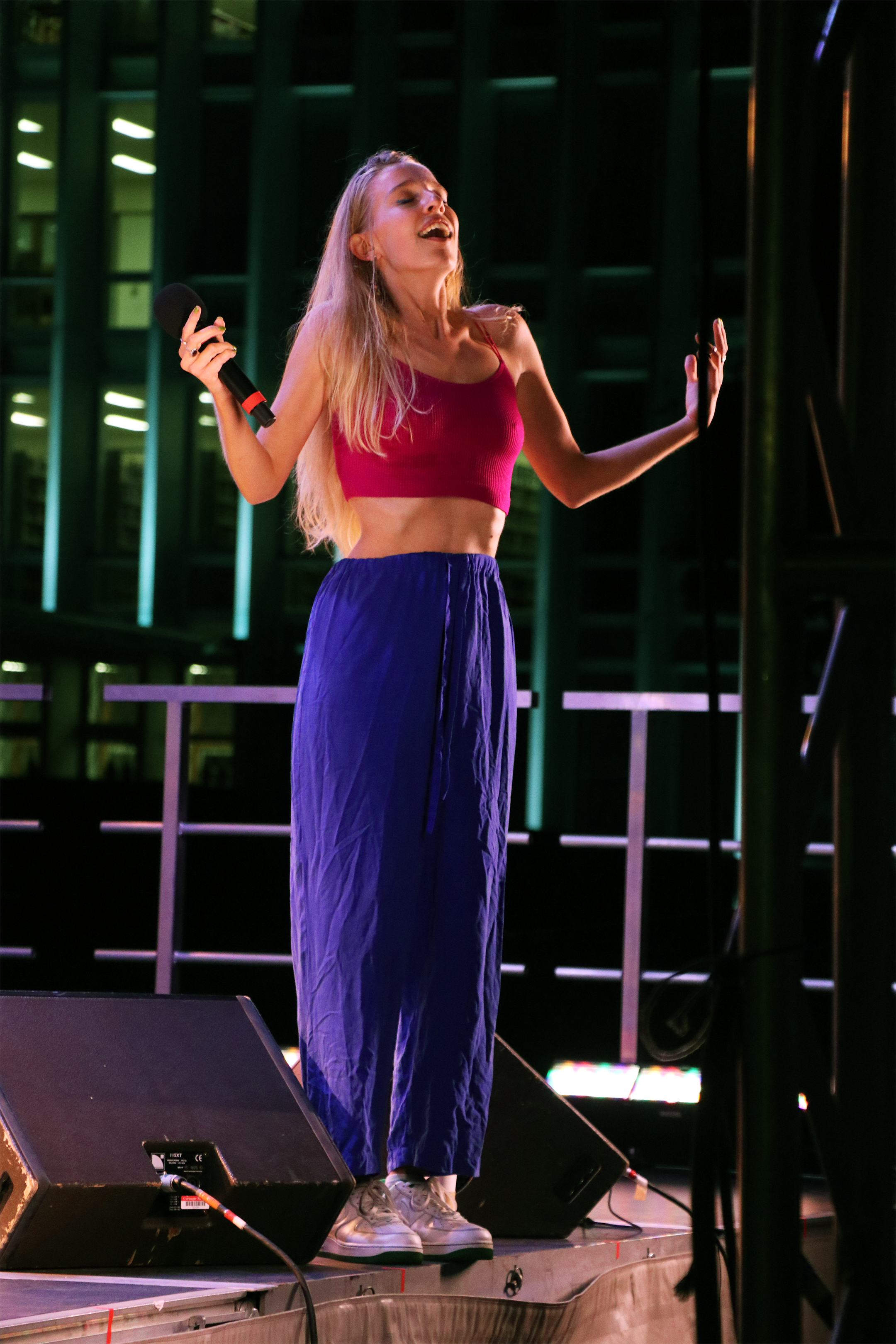 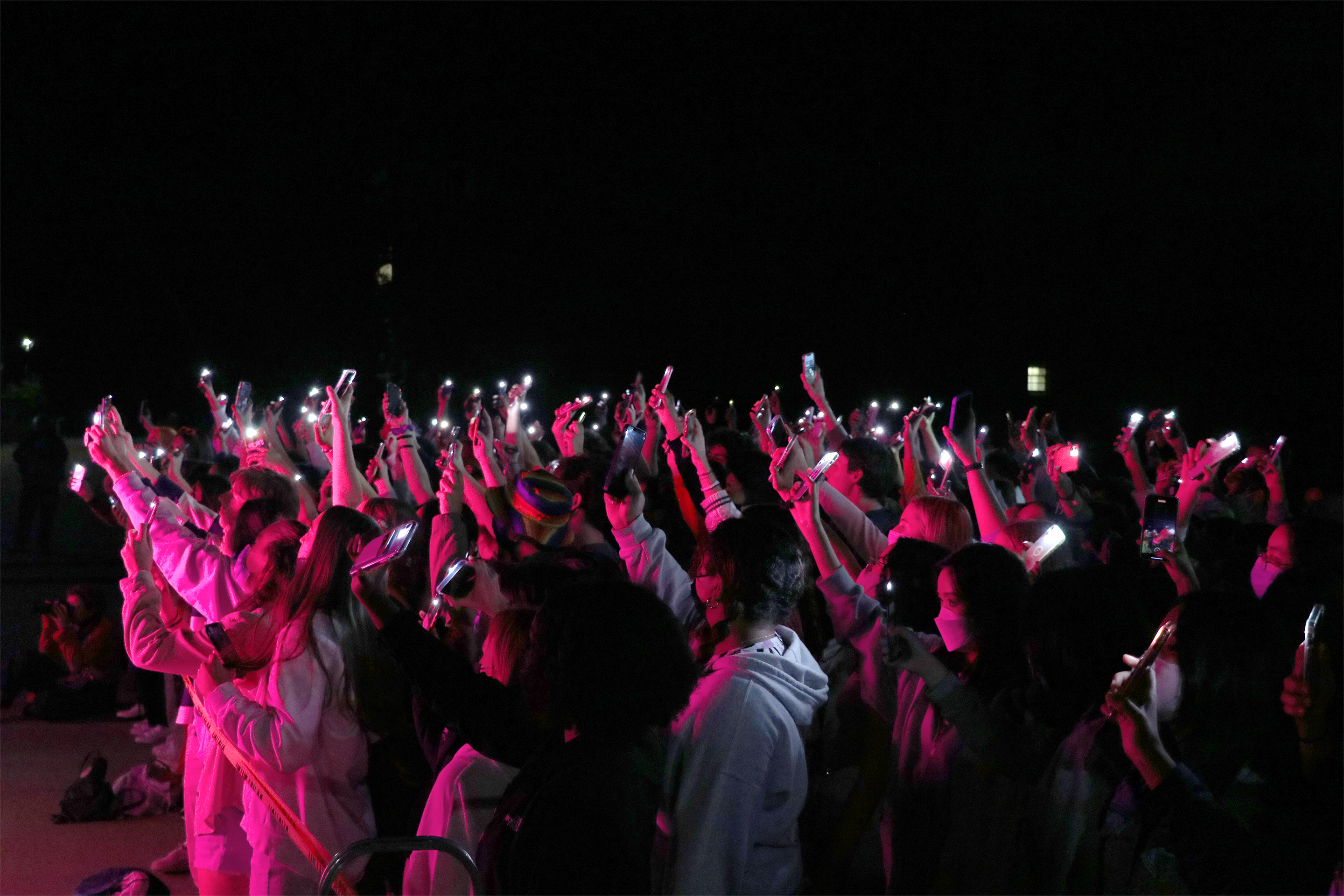 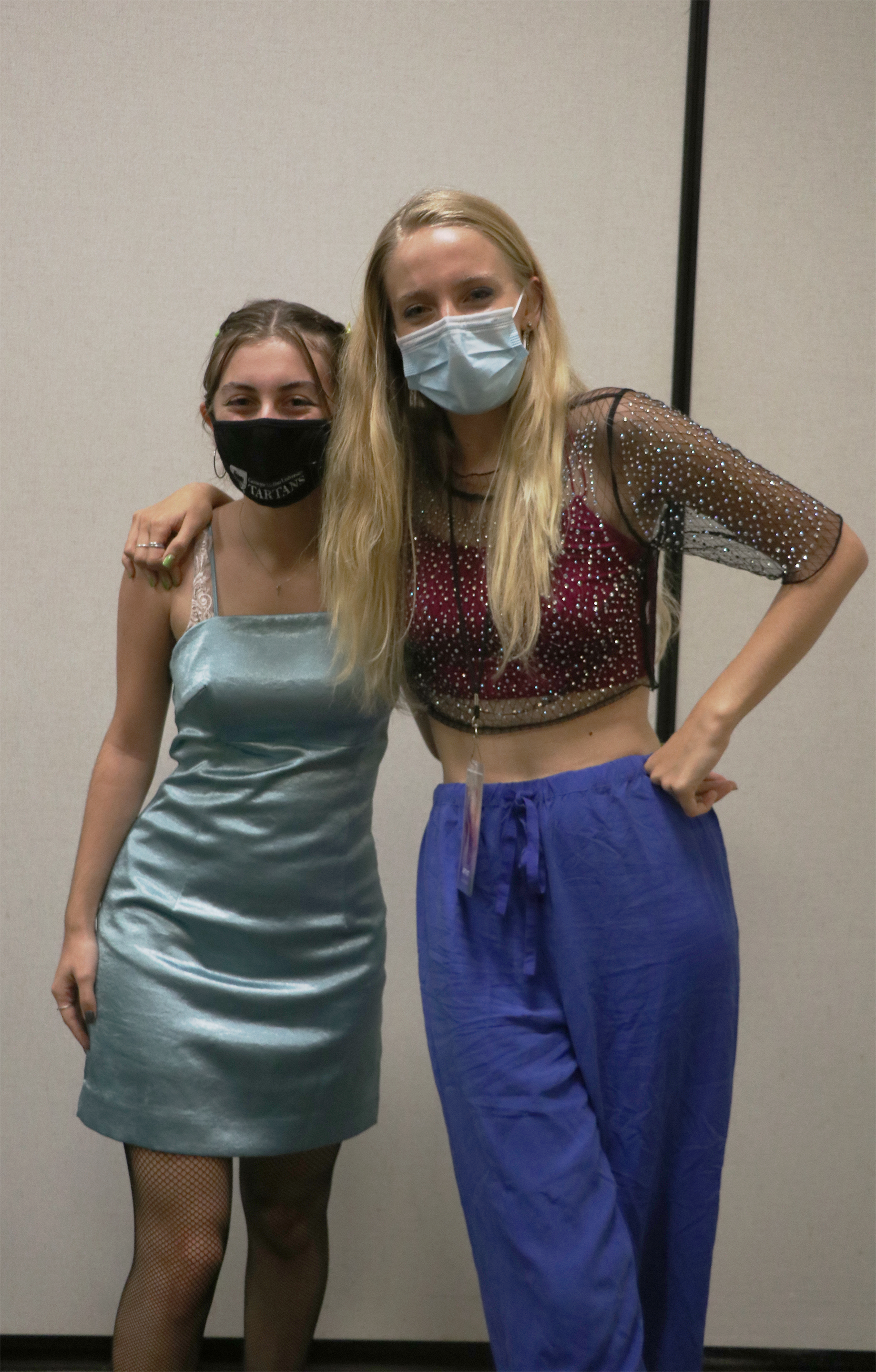 On Tuesday, Sept. 22, Pittsburgh experienced a meteorological rarity: a tornado warning. Though many thought the threat had passed, merely two days after, on Friday, Sept. 24, another storm hit: Maude Latour, a pop artist, arrived on campus, fresh off of a plane from New York City and ready to shake up the Mall with her first live show since March 2020.

Prior to the show, I had the absolute thrill of sitting down with a sound-checked and full-of-pre-show-anticipation Latour and her cup of Au Bon Pain peppermint tea.

With all the glamour she presents — from her rainbow-and-glitter branding to her Rapunzel-style golden hair and enormous sunglasses — it’s hard to see Latour and imagine anything other than a born star. Once you listen to her music, though, it’s easy to tell that much more lies under the surface. Pieces like “Starsick” and “Walk Backwards” contain universes of philosophies, theories, and life experiences that made me eager to learn more about Latour.

For one thing, just like many of us, Latour is a college student. While entering what may be a pivotal era for her musical career, she is also beginning her senior year studying philosophy at Columbia University. She tells me philosophy has “helped [her] music be true.” She says, “I want what I say to be what I believe in; I want my music to be held to the same standard as ... truth.”

Let me explain why this is not at all a stretch for Latour; I refer to her music regularly as intellectual pop, a unique brand that appeals to the sensibilities of the modern young adult while invoking a deep sense of identity with the artist. There’s predictable drum beats, synth sounds, and lots of talk about breakups, yes, but there’s also musings on god, literature, and fear of death (see “Superfruit” and “Block Your Number”). You can hear a teenage girl, but also a teenage girl at one of the most prestigious colleges in the country; you can hear late night parties but also mid-day lectures on the classical literary definition of lovesickness — “They were like, ‘lovesickness used to be diagnosed as an actual disease, like a physical ailment with like bodily effects you’d be bedridden and diagnosed with’ [and I was like] no frickin’ wonder.”

As I’ve intoned, Latour’s songwriting can be relied upon to be consistently honest and true-to-life. From writing about “the daily mundane parts of life, like walking across campus,” to songs that are truly confessional, her dedication to reality has fostered a fanbase that is closely connected to her work and her life.

“I guess I’ve kind of had a promise to myself,” she says. “When I first started writing songs, it was like diary entries. I’ve always kept a journal. Since I was like, in first grade pretty much, I’ve written down every single thing that’s ever happened to me. And that is like what I come to music for ... being able to take a moment and make it eternal, being able to take a feeling and capture it, freeze something that’s not meant to be frozen. I always had a promise kind of, to only write songs that I need to get through something, and so they’re the space that I can find the words to say something. It’s like, it’s how I can have my last word for anything, and how I can kind of make sure I’m a person, how I kind of make sure I’m alive. The first form any experience takes in me is music.”

Outside of the writing itself, Latour talked to me about how college has shaped her music journey. She’s surrounded herself with a group of collaborators, friends, and supporters who she describes as “so hungry for inspiration.” Whether it’s help with touring, merchandise, photography, or her epic music videos, she says, ”Everyone has a bit of ownership over the project and we’ve watched it grow together. I wouldn’t want it, I wouldn’t enjoy it as much if they weren’t there.”

I imagined myself in her shoes here, with my life as full as hers — friends, writing, school, trying to build a career as a young artist, and I balked at the immensity of it. Having thought and talked for a long time about work-life balance, I asked her what that juggling act looks like for her.

“I’m taking a slightly lighter course load than I normally do, but then I got back and I sat in on some Shakespeare class, and I was promising myself to just take three classes but then I signed up for more classes because they’re so interesting! That’s kind of always been my approach to school, just really like there to absorb or there to be curious and like, learn for the sake of learning.”

There’s a kind of childlikeness to her unadulterated zest for life and learning that peaks my interest. Here, she equivocates:

“There’s like real answers and like fake answers. Like really, it’s crazy, you know, whenever you have something that you’ve always wanted like, it’s so wonderful when you can truly be grateful for something in the moment as it’s happening — although there’s so many stressful things around as I’m sure you feel going to school here. Like, you wanted it so badly. It’s so wonderful when you can remember how grateful you truly are for what’s occurring at the exact moment.”

I’ve been struck in the face with a parcel of truth so absolute and necessary that I feel the need to mentally step back for a moment. Do we all strive and strive and then forget the striving when we arrive where we were meant to be? She has presented to me a version of gratitude that combines maturity and mindfulness into a system for prioritizing what is right and real and important and happy. For her, she explains, that prioritized slot belongs to music:

“I’m finding ways to [remember] that with music ... even though it’s so much, I’m not gonna let school stress me out at all, and if it’s starting to stress me out I will just be fine getting the lower grade. I realized this summer that if I’m not happy doing [music] then I should quit. Like, it just doesn’t matter. So now my only goal being here is to just be happy; like I do not care how big I get … I just would love to be a little bit happy.”

I say what I think here, and what I think is that by that measure she will be as successful as she could ever want, maybe even a little bit happy, maybe even happy enough. Latour has made space for that too, in many ways. Though music is obviously her ultimate dream, she says, “I could see myself being like a teacher later like way later. I can see myself being in school for a while and then giving that back to people as well,” adding, “we’ll see where this long and winding road does go.”

Part of her long and winding road is coming to a close though, and I ask her about her impending graduation — “Oh my god! You’re right,” she says. “I wonder how it’ll all change when I leave school ... there will be no ceiling and no framework for it … I’ll have to ask myself way harder questions.”

To meet Latour now, through music or otherwise, is to see many doors closing and many more opening all at once. Having just signed on with Warner Records and returned from a pandemic hiatus, she spent this past summer in Los Angeles working on a new album that she describes as “slightly Maude 3.0,” though she noted that there is still work to be done before turning over her newest leaf:

“I have a couple shows this fall — they actually all sold out in 30 seconds and it was so shocking to see that happen, like it’s been so long and my last show before COVID sold like 47 tickets, and now they’re all gone in a moment ... I’m reminded that the final form of all of these songs is them being live in the room sung along to … and they need this closure, they need to be sung in the moment in front of people.”

And to watch her do exactly that was nothing short of euphoric. An audience composed of Latour newbies and die-hards alike crowded together on the Mall grass Friday night for what Latour described as “the dream”: “shows packed with people who know every word.” The show was full of firsts and first-since-pandemic moments and out-of-breath, out-of-voice moments and a whole lot of revisiting the mesmerizing melodies that fans clung to when they first listened to Latour’s music. Latour will certainly be seeing more of these kinds of shows as she embarks on her brand new post-COVID musical adventure. In the meantime, she says, “I’m magnetically pulled regardless of whether I like it or not, to find [the] truer and truer and clearer and clearer, deeper, more pressing, and urgent.” I don’t know about you, but I’m incredibly excited to find out what that sounds like.