The Fence painted in support of reproductive rights 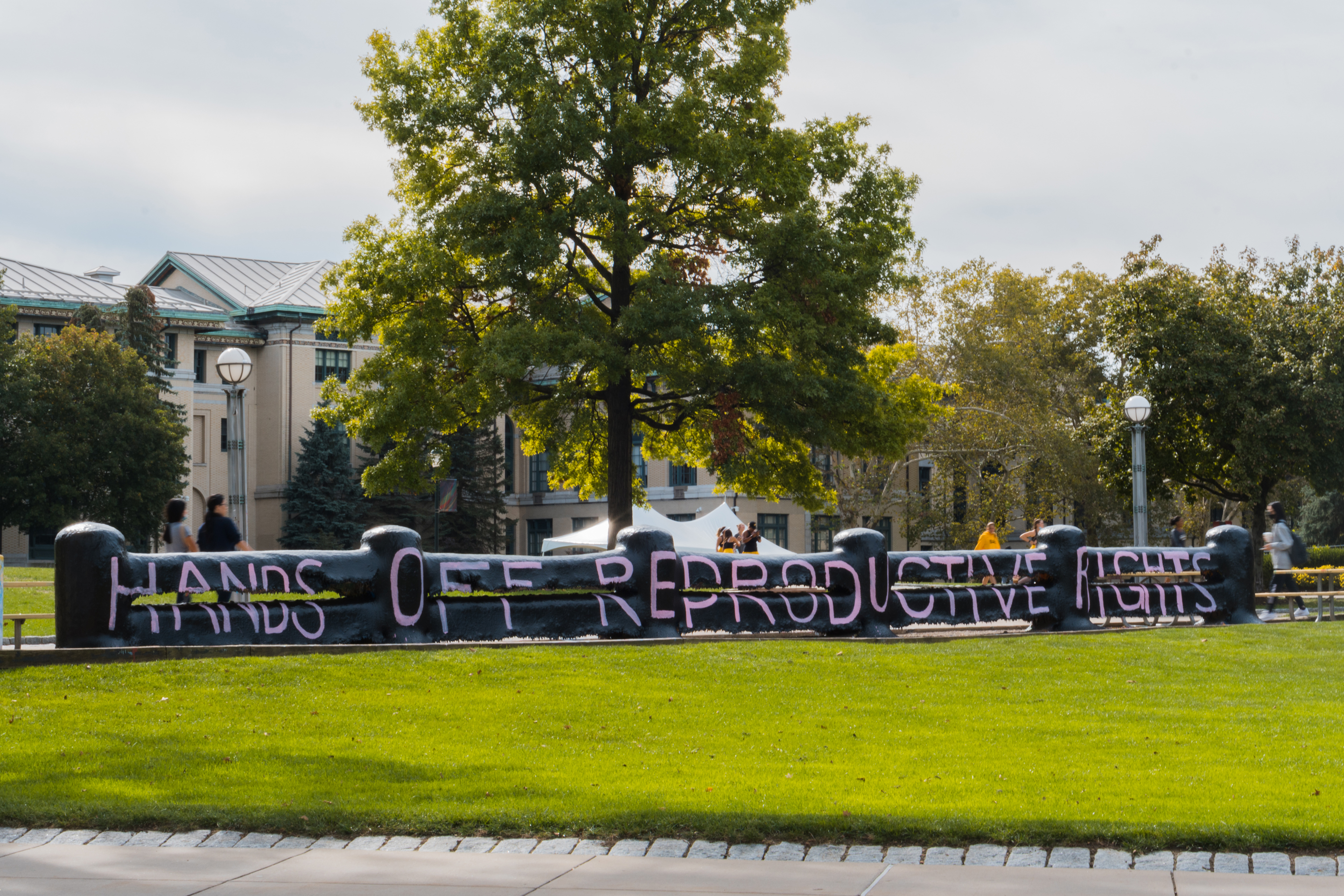 Students painted “Hands off reproductive rights” on the Fence in protest of Created Equal. Students also solicited donations by “Walking to the Sky” for the Western PA Fund for Choice to support reproductive rights. (credit: Staff Photographer)

On the morning of Wednesday, Sept. 29, the Carnegie Mellon campus community walked past the familiar Fence which carried a new message: “Abortion is not a bad word” on one side and “Hands off reproductive rights” on the other. The painting was a preemptive response to the demonstration by anti-abortion group Created Equal on Wednesday afternoon. The demonstration was part of a campus and urban tour by the group, featuring displays of provocative images, and was conducted at the intersection of Forbes and Morewood Ave. Students were alerted about the demonstration through a post on Tuesday afternoon in the Facebook group Overlooked at Carnegie Mellon. In response to the post, Sam Thompson, a junior in mathematical sciences, left a comment saying that he was organizing a Fence painting with a pro-choice message.

“The Fence is central to CMU, and has always been an important part of student speech,” said Thompson in an interview with The Tartan. According to Thompson, painting the Fence was not organized by any campus organization, but it received support from CIA Buggy (of which Thompson is chair), Apex Buggy, and a capella group CMU Soundbytes. About 30 people showed up to paint at midnight.

In an email interview with The Tartan, Lisa Tetrault, professor of history and gender studies at Carnegie Mellon, explained some of the controversial aspects of the Texas anti-abortion law. She referenced Roe v. Wade, the 1973 Supreme Court precedent which recognized a constitutional right to abortion. “Roe uses a standard of viability, which means states can ban, if they so choose (they are not required to ban) when the fetus can live outside the womb (with intense medical support), which is currently about 24 weeks. At that point the court recognizes life,” Tetrault said. However, she continued, “The TX [Texas] law bans at heartbeat, which is about six weeks, on the argument that this marks life.” The issue, she said, is that at six weeks, most people either do not know or just learn that they are pregnant. Jumping through the hoops of bureaucracy to get an abortion takes time, so the Texas law effectively prevents the ability to get an abortion in time, according to Tetrault.

The provocative images displayed by Created Equal, supposedly depicting aborted fetuses, were designed to draw reactions from people. Instead of arguing on the sidewalk, Thompson wanted to do something that shares the same message but reaches more students. By painting the Fence, Thompson and fellow painters hoped to “give support to some people in a way that’s positive and constructive” and “show students that there are other people that feel the same way as them.” Photos of the Fence painting were posted on the student-run Instagram page @cmufence and quickly gained support, being shared widely among students.

Thompson and other students also camped out and collected donations near Walking to the Sky at the same time that Created Equal were conducting their demonstration from 10:30 a.m. to 1:30 p.m. In a few hours, they collected over $300 which they donated to the Western PA Fund for Choice, not counting the direct donations made to the Fund by passersby. In this stage in the fight for reproductive rights, Tetrault says students cannot take anything for granted: “Learn what the legalities are. Teach others. Organize. Resist. Vote.”