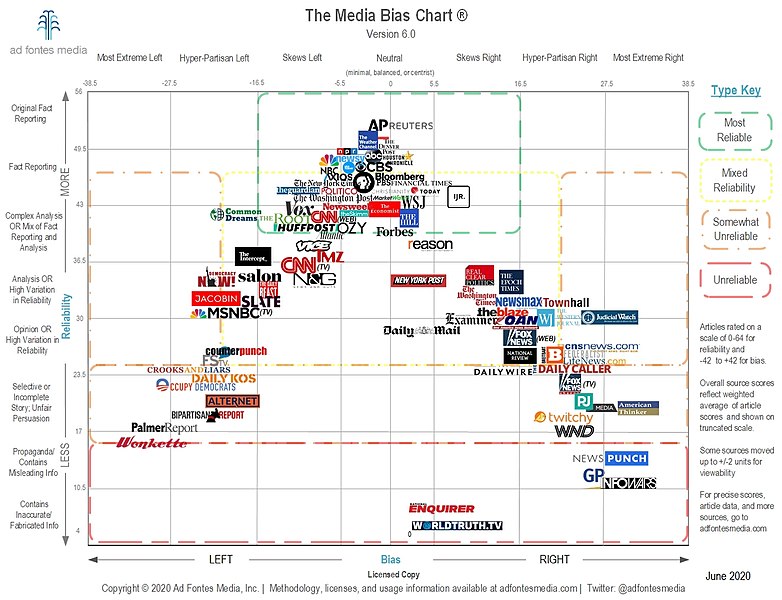 Many media outlets have some bias associated with them. This directly affects what information their audience consumes. Getting information from multiple sources can balance this, but few people have time to view multiple sources. (credit: Courtesy of Ad Fontes Media via Wikimedia Commons)
Editorials featured in the Forum section are solely the opinions of their individual authors.

I’m tired of being skeptical.

As someone who cares about journalism and thinks of it as a possible career path, the structure of news media consistently frustrates me. The main purpose of news outlets should be to inform the public and to be the watchdog. Instead of news outlets being on the side of “the people,” modern media bias seems to be inescapable. I think more frustrating than partisanship in the media is the fact that most media outlets are inextricably tied down to their audiences: in other words, who clicks, who pays. Major news outlets might have concurrent goals of watchdog, investigative, or nonpartisan journalism, but at the end of the day, many are for-profit companies who think about what will get people to tune into their channel or click on their articles. So news agencies will tailor and cherry-pick what topics and events to cover, how much they cover them, and what kind of spin they put on it by the news diet makeup of their audience.

In a 2019 special report, the "Columbia Journalism Review" published an article speaking about media complacency in the face of the climate crisis, how “The brutal demands of ratings and money work against adequate coverage of the biggest story of our time.” Pew Research Center did a study of news media coverage of Biden’s first 100 days and found that people who got news from outlets with right-leaning audiences “were more likely to say they had heard a lot about Biden’s use of executive orders (79 percent),” which was “nearly twice … those who turn only to left-leaning audiences (42 percent).”

To have such a large discrepancy between what gets covered and what information gets disseminated is concerning. There will always be a risk of bias in the media (as journalists are human beings), and all consumers of news should have multiple sources of information no matter the topic. But the fact of the matter is, sometimes there is just not enough time in the day for every American across the U.S. to cross-reference every story that appears before their eyes. To have people reading one news outlet’s news pieces — not op-eds — form a completely different idea of events and political figures seems like a major deficit in our news delivery system.

It also risks complacency. News burnout has become more prevalent given today’s high-speed modes of delivery, and it is easy to feel overwhelmed and bombarded with news from every corner of the country. Still, it cannot undermine the healthy skepticism one should regard our political figures with. Another finding of the Pew study was that only 16 percent of Americans who only follow left-leaning news sources closely follow news about the Biden administration, making them the group least likely to do so. Meanwhile, those who only follow right-leaning sources were twice as likely at 30 percent.

It is easy to fall into tunnel vision with today’s media. Especially with social media on the scene, I am concerned we are accelerating towards a larger scale version of TikTok’s “for you page” algorithm: not only does partisan reporting breed partisan readership, but partisan readership also breeds partisan reporting. And if you are not actively questioning the ulterior motives or underlying ideologies of sources, the articles you intake will shape your political beliefs instead of you shaping your beliefs based on events that happen.

Still, it is tiring to have that skepticism all the time.