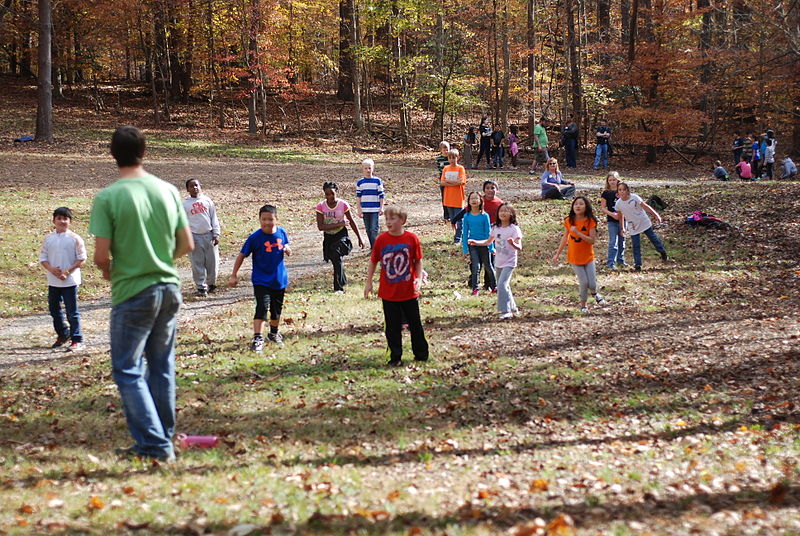 The popular children’s game “Red Light Green Light” is one of many contests the competitors must survive in “Squid Game.” (credit: Courtesy of Jarek Tuszyński via Wikimedia Commons)
Editorials featured in the Forum section are solely the opinions of their individual authors.

Imagine that one day you wake up in a series of survival games that never seem to end, where even one mistake can lead to not only your in-game elimination but also your real death. Where in your fight to survive and return to the real world, you make friends and enemies, experience love and betrayal, and confront death and your fear of it many, many times.

This is essentially the overarching idea of “Squid Game,” a nine-episode Korean Netflix series that blazed across the globe after its release on Sept. 17. But what you may not know is that these are the core themes of a genre popular in the Eastern world called infinite flow.

First an explanation of the term: infinite flow is called wu xian liu (无限流) in Chinese. The term also can be translated as infinite stream, unlimited flow, infinite horror, etc. According to Baike Baidu (which is basically Chinese Wikipedia so perhaps not the most trustworthy, but anyways) it was popularized by 2007 novel "无限恐怖," which can be translated as "Infinite Horror" or "Unlimited Terror."

True to its name, infinite flow is characterized by a seemingly never-ending flow of survival games, puzzles, or entire worlds, in which if you survive all of them, you can return to the real world or retrieve a reward that you desire. However, if you fail any one of the games, you are killed. There are also other deadly elements in-game, ranging from traps to guards to monsters. The genre often pits humans against each other and requires a combination of strength, wits, and sometimes even morality and humility to succeed.

It's a fascinating genre that has not really had an exact equivalent in the Western world, or at least not one nearly as popular as “Squid Game.” Sure, it could be argued that this is simply a variation of the survival game genre that would include series like “Hunger Games.” It is also true that many of the terror and horror aspects are quite similar. “Squid Game” creator Hwang Dong-hyuk said in an interview with "Variety" that he was inspired by Japanese manga "Battle Royale" and "Liar Game," which were released years before the aforementioned "Infinite Horror" novel and are similar in nature. However, they tend to also be classified as battle royale and survival games rather than infinite flow, and "Squid Game" could be argued to be the same.

Regardless, what I think makes infinite flow such a compelling genre unique from others is that it naturally brings elements that tend to hook audiences onto a show to the table. For one, it is naturally episodic, as there must be a series of worlds for the protagonist to go through. Because each "world" or game requires a heavy amount of staging and world-building, each episode or arc feels very different. "Squid Game" contains only six games in the course of its nine episodes, but there are definitely novels with many more than six games, such as one called “Card Room,” in which each game, or room, corresponds to each card of a standard deck, leading to at least 52 rooms. There is also a guaranteed overarching plot, as the protagonist has to be able to get to the end of the survival games and return to the real world.

It also brings a host of very interesting characters to the table, as not only do you need a huge number of people in order to play the games, desperate times call for desperate measures, and the prospect of dying brings out the worst in people. While normal survival game media also have similar tropes, infinite flow is also able to force characters into a much wider variety of situations, accentuating different strengths and weaknesses of characters in each situation. For example, in situations where teamwork is allowed, you might find a couple grow closer together, but in the next arc, where it becomes every person for themselves, you might find that the first thing that same couple does is knife each other. You might find that the person who ruthlessly sacrificed people who weren't their teammates is eventually sacrificed by their own teammate who they protected and trusted.

It's endlessly exciting, with so many forms and variations. Even after reading so many novels in this genre, each novel feels so new and full of the author's perspectives on life, human behavior, and all sorts of commentary on our world. I'm always trying to crack puzzles, analyze the reasons behind each person's behavior, and piece together the bits of clues that signal the true purpose of the games. I'm glad that “Squid Game” has caught on in Western media and throughout the world, and I'm excited to see the new shapes the infinite flow genre will take.