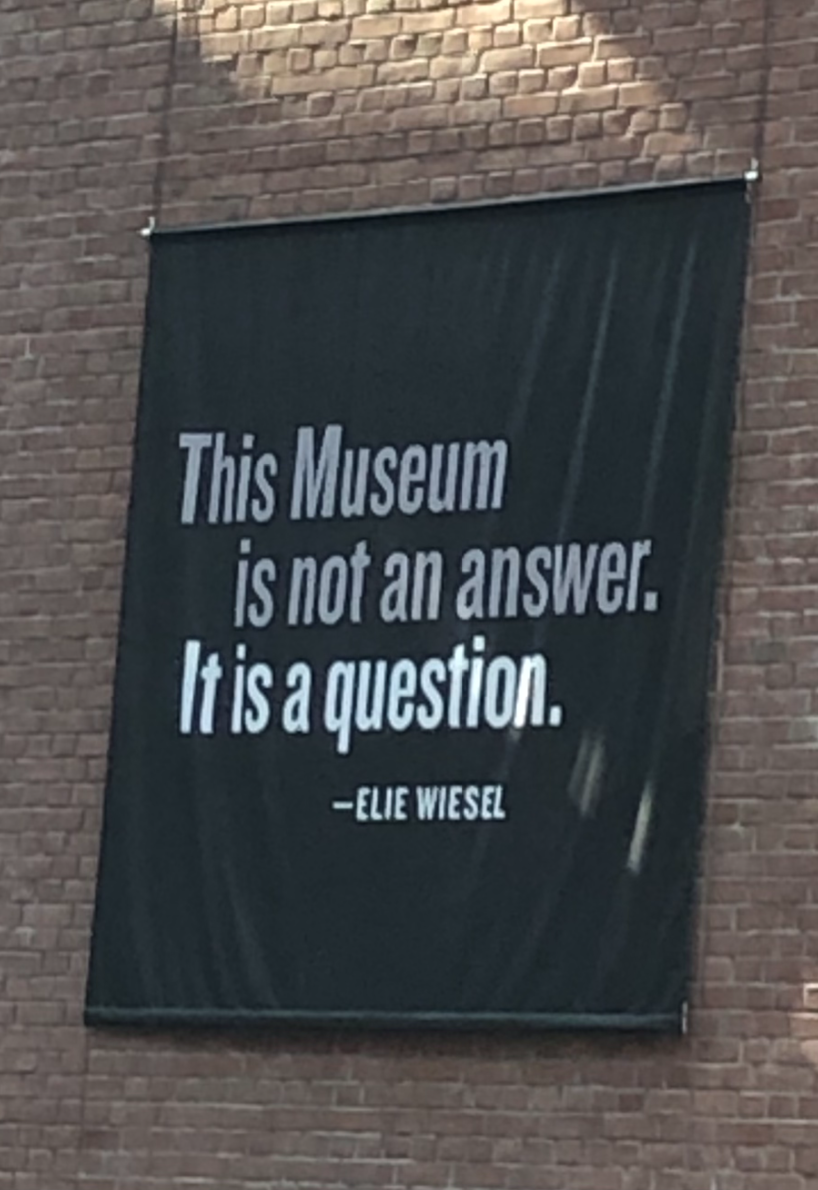 The banner that hangs from the walls of the Holocaust Museum in Washington, D.C. (credit: Sarah Abrams/)
Editorials featured in the Forum section are solely the opinions of their individual authors.

Richard Grenell has become the focal point of student newspaper articles, opinion pieces, and memes by those who feel strongly about his appointment as a senior fellow to Carnegie Mellon’s Institute of Politics and Strategy (IPS). The fact of the matter is, Grenell’s appointment is not as black-and-white as “conservative bad, liberal good.” Grenell’s nomination by President Donald Trump to serve on the Holocaust Memorial Council has transformed the university community’s disagreements into a larger controversy amongst Jews worldwide.

Grenell’s critics agree with Halie Sofer, CEO of the Jewish Democratic Council of America, who says that Grenell “had in the past emboldened neo-Nazis.” In response to Sofer’s comments, Rabbi Abraham Cooper, Associate Dean of the Simon Wiesenthal Center, explained to The Jerusalem Post, “no U.S. ambassador posted to Berlin in recent history has done more to combat antisemitism in Germany… than Richard Grenell.” Thus, the question remains: has Grenell done positive things for Jews and Israel? As a member of the Jewish community, I sought to discover the multifaceted truths about Richard Grenell. Is Grenell inherently antisemitic? If he has, in fact, made strides towards dismantling antisemitism, can we recognize these while still condemning other parts of his political agenda? Is Sofer or Cooper unequivocally wrong, or can their statements coexist?

I posed these questions to undergraduate members of the Jewish community across Carnegie Mellon.

First, sophomore statistics and data science major Etan Cohn writes that “Grenell may not be antisemitic himself, but he has used harmful rhetoric towards other marginalized communities, which fuels groups and people who are antisemitic….” Junior history major Jonah Dubin adds on, “... it frightens me, knowing… what the implication of a Grenell presence would result in for the Holocaust Memorial Council and broader Jewish history education among the American public….” Computer science senior Cece Brower explains, “Richard Grenell's support of nationalists and anti-establishment politicians in Europe and of Donald Trump [speaks] volumes and clearly demonstrates his antisemitism. Donald Trump is antisemitic regardless of what he has done for Israel. He supports Israel, but not because he cares about Jews. I believe the same to be true about Grenell.” Therefore, if Grenell does not truly care about the Jewish community, critics believe he should not serve on this highly esteemed council.

Others criticize Grenell's political beliefs but do not share the concern about his appointment to the Holocaust Memorial Council. One Carnegie Mellon student writes, “Grenell’s political beliefs are atrocious, but he has advocated for Judaism in European and Middle Eastern countries which have historically pushed aside a Jewish haven in the name of extremism.” Another student continues, “Grenell values profit and greed above Jewish freedoms. This is not only seen in right-wing politics. We must acknowledge that Grenell is a product of the fundamentally flawed and corrupt system of American politics which continuously suppresses racial, ethnic, gender, and religious minorities. Within this antisemitic world there very well might be no better option.”

Drawing upon responses from the Jewish community expressing their concern for Grenell’s presence on the Holocaust Memorial Council, a larger problem is unveiled. Members of the Jewish community believe that Grenell’s thirst for approval creates biases in his decision making; instead of acting in the public interest, he thrives off money and power. Carnegie Mellon IPS senior Aden Halpern writes, “The so-called U.S.-led ‘peace deals’ that [Grenell] advocated for between Israel, UAE, etc., are more about selling weapons than ending conflict. To Grenell, weapon contracts are more valuable than human lives.” While students at Carnegie Mellon overwhelmingly feel that Grenell has deceived the Jewish community into believing he is acting in their interests, German reporter Orbit Afra believes “Richard Grenell had been making the German-American relationship more open and honest than ever before and holding Germany accountable to their ethical, historical and political obligations.” Why do these differences in opinions persist? Does intention matter if the end result is a desirable outcome for Jews? Given that the Nazis killed and terrorized homosexuals as well, could Grenell’s identity as a gay man bring a unique perspective that better allows the memorial to honor those who were targeted during the Holocaust?

Thus, the questions remain: Is Grenell the proper fit for the U.S. Holocaust Memorial Council? Has Grenell encouraged antisemitism, and if so, is this prejudice unique to right-wing politics? Has Grenell fueled an American (or even global) system which oppresses minorities, or is he a result of this system? Despite whether Grenell’s nomination becomes an appointment, the sorrowful truth is that antisemitism will likely not be prevented either way. In a country where the Jewish community faces the highest percentage of religion-based hate crimes nearly every year, where the media is able to distort the true magnitude of antisemitism, and where the Holocaust is historically misrepresented for political gain, who is the right pick for this highly esteemed council?

The dialogue surrounding present-day antisemitism is embodied on the walls of Washington D.C.’s Holocaust Museum. From the museum’s walls hang a banner with the same thought-provoking reminder with which I leave you today: “This museum is not an answer, it is a question.”