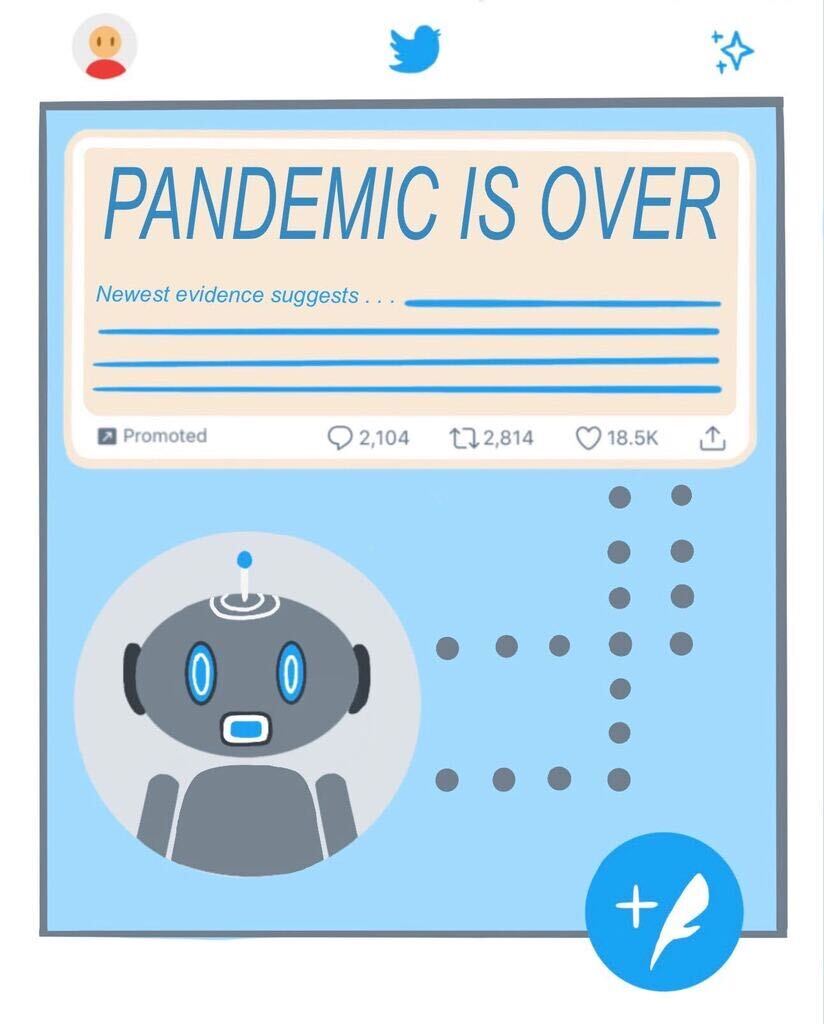 A Carnegie Mellon study suggests up to half of the Twitter accounts talking about COVID are bots. (credit: Clarice Du/)

The COVD-19 pandemic continues to sweep through the nation, leaving thousands dead in its wake and forcing Americans to adapt to a new “normal”: one replete with face masks, social distancing, and obsessive sanitation. Yet as deadly and disruptive as the disease is, a quick search on the internet will reveal that Americans are incredibly divided over this issue. Some, understanding the risks of the disease and its implications for themselves and their loved ones, willingly follow the recommendations of public health officials. Others, frustrated at perceived infringements of their personal freedoms, refuse to wear masks and social distance, with some going as far as hosting COVID-19 parties

In this age of rampant misinformation, it is not surprising why Americans are so conflicted, and it does not help that COVID-19 has become such a politically charged topic that its status as a threat to public health and safety seems to have fallen by the wayside. With the ubiquity of social media and multimedia news networks, vectors for misinformation are numerous and constantly barrage people with dubious claims and fringe ideas. While we understand the danger of misinformation, quantifying its scope can give a better appreciation of just how serious of a problem it is.

A study this past May by Kathleen Carley and her research team in the School of Computer Science did just that, looking at the frequency of “bot” accounts on Twitter. After analyzing over 200 million tweets using powerful machine learning techniques, the data suggested that 82 percent of the top 50 most influential retweeters were bot accounts, and of the top 1,000 retweeters, 62 percent were bots. From these tweets, over 100 types of inaccurate COVID-19 stories were identified, such as pieces speculating about potential cures. Bots on their own already pose a threat, but humans aided by bots are more prevalent. In discussions around controversial topics like reopening America, bots on their own accounted for 34 percent of the tweets, but humans collaborating with bots accounted for the remaining 66 percent, indicating orchestrated efforts to sway the conversation. Not only this, but bots help circulate conspiracy theories about 5G causing COVID-19 or hospitals faking over-capacity by using mannequins. Twitter was the starting point, but the study has since been expanded to include other platforms like Facebook, YouTube, and Reddit.

One of the major benefits of social media platforms is that they democratize the exchange of information. However, without rigid fact-checking policies in place, it becomes all too easy to propagate misguided views through large populations, creating misinformed groups either inadvertently or, in the worst case, for an ulterior motive. And with the combined psychological stress of a pandemic and increased time spent online and on virtual platforms, people now are more susceptible to misinformation than in the past. Some social media platforms are taking proactive steps to try to combat the spread of misinformation, such as YouTube changing its algorithms to promote legitimate COVID-19 related videos and burying ones with potentially misleading claims, or WhatsApp implementing features to make it easier for users to get information from the World Health Organization. Whether these measures are effective at beating back the tide remains to be seen, especially against armies of bots.

As long as the pandemic continues to rage, so too will misinformation about the disease. For now, it is up to the consumer to fact-check any claims that they come across. Even though the thought of parsing through your daily feed sounds overwhelming, Carley remains optimistic, stating that average users can do a lot to protect themselves from bots. Simple tasks like inspecting accounts closely for mistyped links or mismatched names and profile pictures can go a long way towards sniffing out bots. [As for important information on the pandemic, always use authoritative or trusted sources. So, the next time you are scrolling through your Twitter feed, pay attention to the little details and treat everything you read with a healthy skepticism: that little bit of added vigilance could make a world of difference for you and your community.