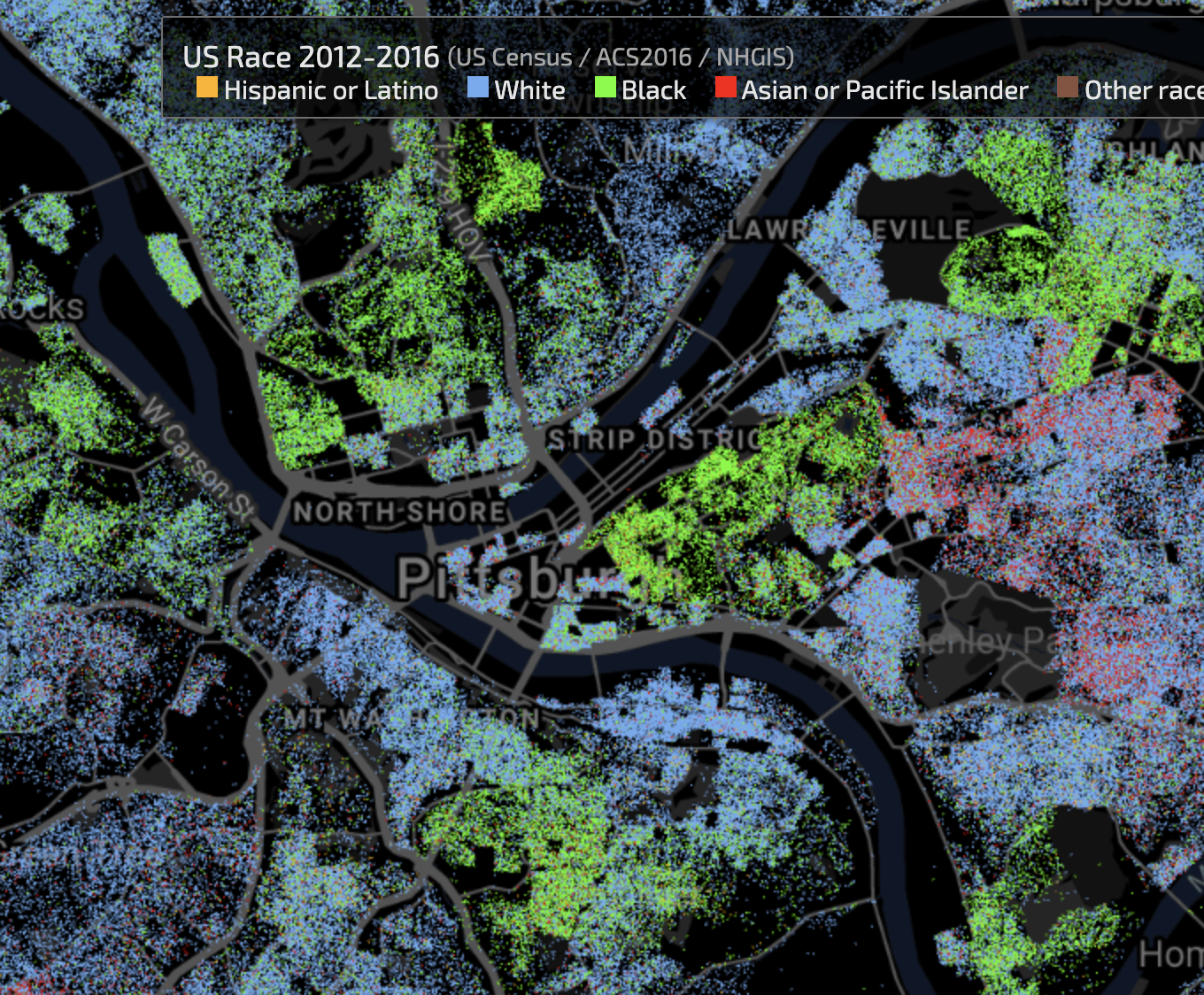 A map showing the racial density of different neighborhoods of Pittsburgh. (credit: Courtesy of EarthTime)

It is no secret that almost 60 years after the passage of the Civil Rights Act, structural racism is still a prevailing issue of our time. Even if segregation and racial discrimination laws are no longer explicit in their wording, their impact can be felt today, even if it is not always easy to see.

This is where EarthTime comes in. EarthTime, an interactive mapping software developed by Carnegie Mellon’s Community Robotics, Education and Technology Empowerment (CREATE) Lab, has collected huge amounts of data obtained from the census, NASA, the UN, university research, and more. The software collates the data into layers that can be displayed geographically over time for a powerful visual effect.

Anne Wright, Director of Operations at CREATE, leads the local demographic mapping work for EarthTime and works with local organizations on a variety of missions. She recently visited Davos, Switzerland to give a talk at the 2020 World Economic Forum pertaining to Pittsburgh’s housing issues and population displacement, using EarthTime to show them in their historical context.

“EarthTime is understanding how our world is changing in various ways … Mostly it involves a combination of exploring data sets to understand what is and has been, and what stories can be illustrated in a way that can help people understand the context and the history,” Wright said in an interview with The Tartan.

Pittsburgh, like many major cities in America, has a history of redlining, the racist banking practice of offering housing loans based on where the applicant lived. Redlining thus ensured that communities of color could not obtain housing loans, and prevented them from moving out of their neighborhood. Even though this practice has been banned since the Fair Housing Act of 1968, segregating African-Americans and people of color into discrete communities is a hard process to undo.

“Pittsburgh has a very high degree of racial segregation to this day. [The racial demographic] borders correspond directly to the historical borders of the redlining maps. The main difference between Pittsburgh and Milwaukee [one of the most racially segregated cities in the country] is that Milwaukee has one big predominantly African American area with fuzzier edges, while Pittsburgh has a number of areas with sharper edges,” Wright said.

“The school district boundaries in Western Pennsylvania are among the most segregated in the country … If you look at those boundaries, they’re also significant boundaries with respect to housing values, race, income, employment, you name it,” Wright said.

Another factor reproducing the effect of redlining is gentrification; several of these historically African American neighborhoods are being faced with wealthier, white people moving in. This results in property value increases (meaning rent increases), and eventual displacement to the outer suburbs.

“Some of [the displacement] is people moving further out into the county … [Recently] there is a significant increase in the African American population in the East Hills. One of the things I did not understand at the beginning of this is that not only are the public transportation options higher inside of Pittsburgh but so are the rights; there are more protected classes, the commission on human relations that does fair housing enforcement. These are not available outside of Pittsburgh in the same way, so when the people are displaced … they end up further out. They are potentially more vulnerable and have fewer opportunities for transit to work, school, childcare and so on,” Wright said.

EarthTime’s ability to explain more recent trends is limited by its data sets. “We don’t have new block-level data until the 2020 census comes out,” Wright explained. “The American Community Survey data, which is what we have that is more recent, uses 5-year averages released yearly, so, for instance, I can see that there are new apartments being built, but I will not see on the block-level that folks are there until the 2020 census.”

Wright can see where public housing has been closed or privatized and replaced with profit-driven housing pushing out people of color, such as in the East Liberty negihborhood. With more data from the 2020 census, EarthTime will be able to visualize what might happen next to these housing communities.