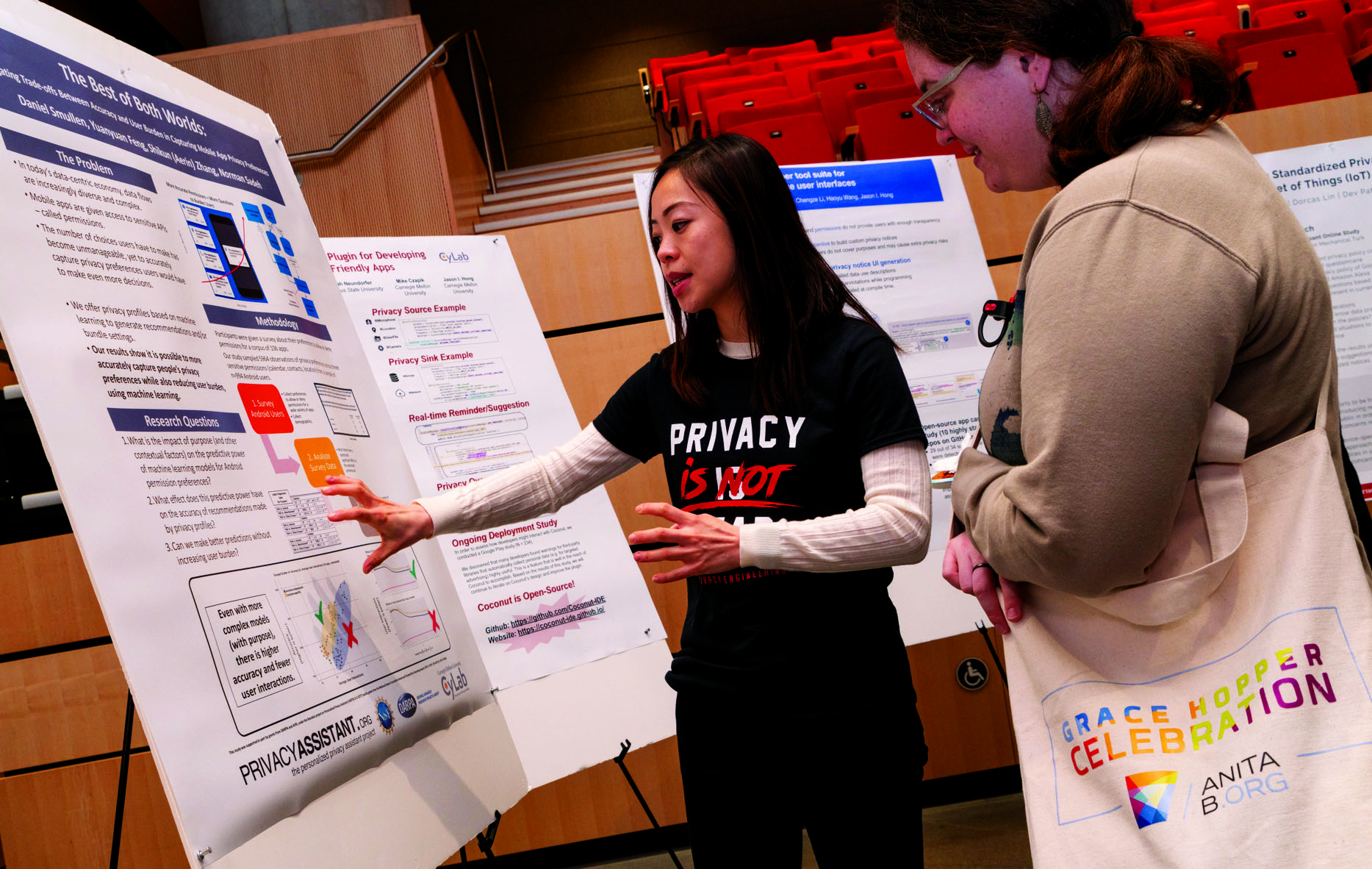 A researcher discusses her work on the privacyassistant.org project with an event attendee. (credit: Courtesy of Carnegie Mellon University)

Professor Lorrie Cranor, the Director and Bosch Distinguished Professor in Security and Privacy Technologies and one of the event coordinators, told The Tartan that “most people don’t have a lot of awareness about how their privacy is being invaded or the steps that they can take to protect their privacy.” As the only university in the world with a graduate program in privacy engineering, Carnegie Mellon has shouldered some of the responsibility towards combating this lack of awareness.

Researchers and students gathered in the Simmons Auditorium at the Tepper Quadrangle to spread awareness about the importance of data privacy, discuss the dangers of the internet, and share new research done in the field of privacy engineering. Large, colorful posters lined the walls, and researchers in “Privacy Matters” t-shirts explained their work on a variety of topics, conversing with others passionate about data privacy and security.

Projects ranged from analyzing the data protection of smart speakers, to developing apps for improving mobile privacy, to inspecting the quality of ad blockers. One project educated others about the use of cookies and cookie policies. Another studied the data privacy of those using Carnegie Mellon’s network. There was even a booth where attendees could type in a password to test its strength.

Although the topics were diverse, they all emphasized the importance of data protection and privacy. Chenghao Ye, a graduate student in the privacy engineering program, told The Tartan, “It’s quite dangerous if those apps can steal your data, because you have no idea what they can do with it.”

Several projects focused on smart devices, such as TV software like Google TV and Roku TV, and smart speakers like Amazon Alexa and Google Assistant, devices which have risen in popularity in the past few years. However, researchers and users alike have become increasingly concerned about the data privacy protections on these devices.

Dev Patel, a graduate student at Carnegie Mellon studying privacy engineering, posed a hypothetical about data privacy: “Let’s say someone is conversing with a voice assistant, and that conversation may be personal. Maybe they are conversing about something that is about their financial information, and that information can be used by these companies.” As a result, he says, “the person or the customers can be manipulated with the data that is collected.”

Currently, there are few data privacy laws, or companies that address the data protection of its users, so it’s now up to the users themselves to ensure their own data privacy. For smart speaker devices, Chenghao advised users to be careful of the skills (add-on programs similar to apps) that they install. “In terms and conditions, Google and Amazon both claim that they will not be responsible for whatever happens to your skills or to your device, so you have to make sure it is safe by clicking the descriptions of the skill,” he said.

Daniel Mo, who is a graduate student studying privacy engineering, also encourages users to know their data privacy rights. He told The Tartan, “Both Amazon and Google provide the right for all the users to request the deletion of their own private conversations, but most users do not know. We believe that to ensure your privacy, you need to know what rights you have.”

Of this year’s event, Cranor said, “I hope people who came to the event learned a bit about steps they can take to protect their privacy and security online and on their phones and connected devices.”