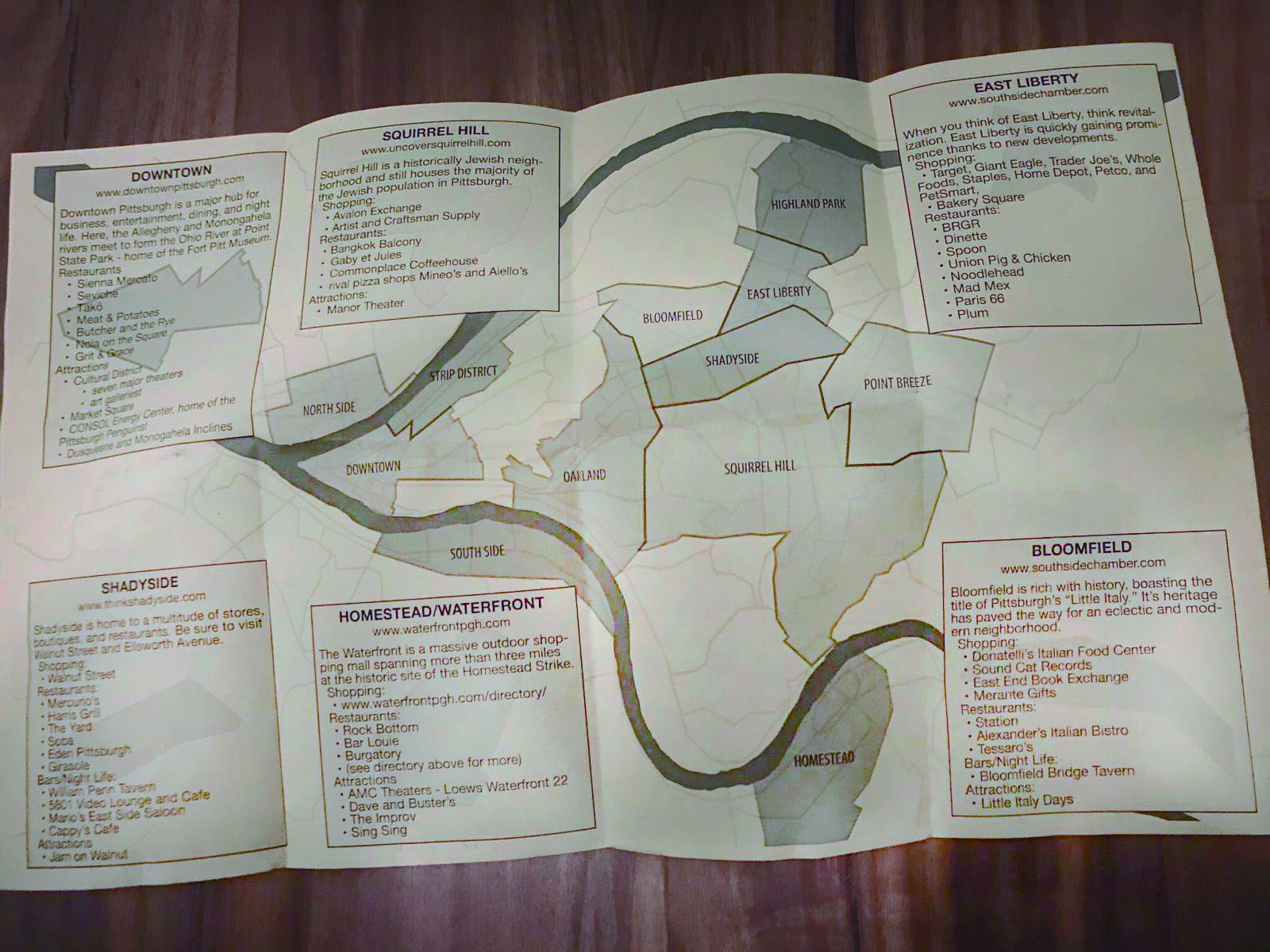 The above pamphlet, which does not highlight predominantely-black neighborhoods, was one of the university maps that sparked outrage. (credit: Courtesy of David Gray Widder )

For over ten years, Carnegie Mellon distributed a map to incoming students that highlighted certain areas of Pittsburgh over others. The since-deleted map, found in university pamphlets and posted on the walls of the Cohon Center, centered on the university and emphasized several neighborhoods in Pittsburgh, but omitted several predominantly-black neighborhoods, including the Hill District, Homewood, and Garfield.

The omission of neighborhoods in the map drew national coverage for its controversial depiction of the city.

David Gray Widder, a Ph.D. student in Software Engineering, wrote an open letter to the administration saying “this is institutional racism on paper, on screen, and on the wall of a building in the heart of our university.”

Ebony Thomas, of Swissvale, made satirical t-shirts in response, which said “Hood Lives Matter,” and highlighted Uptown, Garfield, Larimer, Homewood, East Hills, Hazelwood and the Hill District. Squirrel Hill, where Carnegie Mellon resides, was omitted, with an ellipsis in its place.

The university responds
Carnegie Mellon was quick to respond to the outrage. The map was taken down from the Cohon Center’s walls. It was deleted from the admissions website. Pamphlets were thrown away.

In a statement to Pittsburgh’s Action News 4, a Carnegie Mellon spokesperson stated, “We sincerely apologize for this mistake and the hurt it created. We know we must do better and are committed to learning from this and making immediate and longer-term changes as a result.”

The statement continued to say that the university had scheduled a meeting with “campus community members,” and said that “a committee on campus is already working to identify and implement better practices to foster a more welcoming, respectful and inclusive environment for everyone in the CMU community, including all of our neighbors.”

That committee, not named in the statement, is the existing Campus Climate Implementation Steering Committee, co-chaired by James H. Garrett, Provost, and professor of economics Linda Babcock. Associate Provost Rebecca Culyba told The Tartan in a statement that the committee was founded last year as a result of President Jahanian’s Task Force on Campus Climate.

The committee includes faculty and administration from Student Affairs, Diversity and Inclusion, and Marketing and Communications. They’re tasked with the development of a diversity and inclusion office under the Provost, awareness programming, communications relating to diversity, and “overseeing the review of marketing and communications collateral across campus,” Culyba said.

The steering committee will remain in place until their work is institutionalized under the Provost’s office, she added, “We expect a well-resourced office and its leader to be in place by the fall semester.”

Culyba says that the university acknowledges “that map never should have been created.” She says that in the wake of the map incident, the Provost’s office has made contact with “all CMU deans and vice presidents, requiring each academic and administrative unit to review their collateral to ensure they uphold CMU’s values.”

The university’s marketing and communications division received diversity and inclusion training last year. Culyba notes that “more is being planned throughout the year.”

Pittsburgh City Councillors Daniel Lavelle and Reverend Rick Burgess responded to the incident with a letter to the university requesting that Carnegie Mellon partner with the City of Pittsburgh’s All-In Policy Forum, that the university become a strategic partner in Homewood revitalization efforts, and that the university make “direct commitments and contributions to the City’s communities of color.”

Because of Carnegie Mellon’s 501(c)(3) nonprofit status, the university is exempt from federal and state taxes on revenue. Burgess stated in an interview with The Tartan that unlike schools of similar stature like Brown University and MIT, Carnegie Mellon does not make payments to their city in lieu of taxes, despite leasing some land from the City of Pittsburgh at no cost and making use of the city’s public fire and police departments.

Burgess says that he isn’t interested in punitive measures or punishing the university for its mistakes, and is rather using the incident as a way to start a conversation about Carnegie Mellon’s role in the city. “Me and Mr. Lavelle are more interested in what [Carnegie Mellon is] willing to do moving forward,” he said.

“We’re inviting CMU to use its broad power, its faculty, IT staff, students, its resources, to partner with us, in ways that are appropriate, to focus on rebuilding these traditional African American communities and transforming them from communities of concentrated poverty into mixed-income, stable communities,” Burgess said, referring to the letter’s request that Carnegie Mellon invest in Pittsburgh’s communities of color.

Burgess says that Carnegie Mellon, despite once making payments to the city in lieu of taxes, no longer does. “That I think is wrong, and I’ll tell them that… I think they have an obligation to use their resources to help the city.”

As for what made the map particularly problematic, Burgess said, “I think there is an attitude that’s bigger than any institution in our city that sometimes does not appreciate, rejoice, or celebrate things in African American communities.” The communities excluded from the map, Burgess says, “are often only spotlighted for negative, harsh, punitive things, but are not celebrated, and at the same time, not subject to the same sort of investment that other communities have received.”

Burgess jumped on the opportunity to provide examples of uncelebrated institutions in the omitted neighborhoods. “One of the best bakeries in Pittsburgh is a place called Dana’s Bakery. You probably have not been there,” Burgess said, “And you would not know it was there unless you were from the community.” He also cited Showcase Barbeque, on Frankstown Ave., as another of the city’s finest establishments.

The councilman says that Carnegie Mellon “has already talked, I think, at length, about how the map was not helpful. I think we can all agree on that. So I think to revisit it is not as helpful as moving forward.” He asks, “How can we partner in ways to move forward? Because really, we need all of us working together to make our city great.”

Carnegie Mellon has acknowledged Lavelle and Burgess’ letter, and both parties are in communication to schedule a time to meet and discuss its contents.

Burgess said, “I look forward to partnering with CMU to find ways that we can invest in what we call these ‘communities of opportunities.’” As for the map’s omitted communities, Burgess says, Carnegie Mellon’s “faculty, staff and students are encouraged to come and participate in the victories and amenities that these communities have to offer.”

When asked about Carnegie Mellon’s position on not paying to the City of Pittsburgh in lieu of taxes, Culyba stated that “CMU is deeply committed to Pittsburgh.” She cites examples like Carnegie Mellon providing “computer science education in the Pittsburgh Public School District; donating 11,000 pounds of food to 412 Food Rescue last year; developing research tools that are helping to advance local air and water quality improvements; assisting single mothers in underserved communities with scheduling prenatal appointments; and inventing the future of manufacturing at Hazelwood Green.”

Culyba added that the university has a positive economic impact on the Pittsburgh region, “supporting more than 10,000 local jobs every year, along with 340+ startups created by students and faculty over the past 10 years.” No reference to whether the university would make payments in lieu of taxes in response to Lavelle and Burgess’ letter was made.