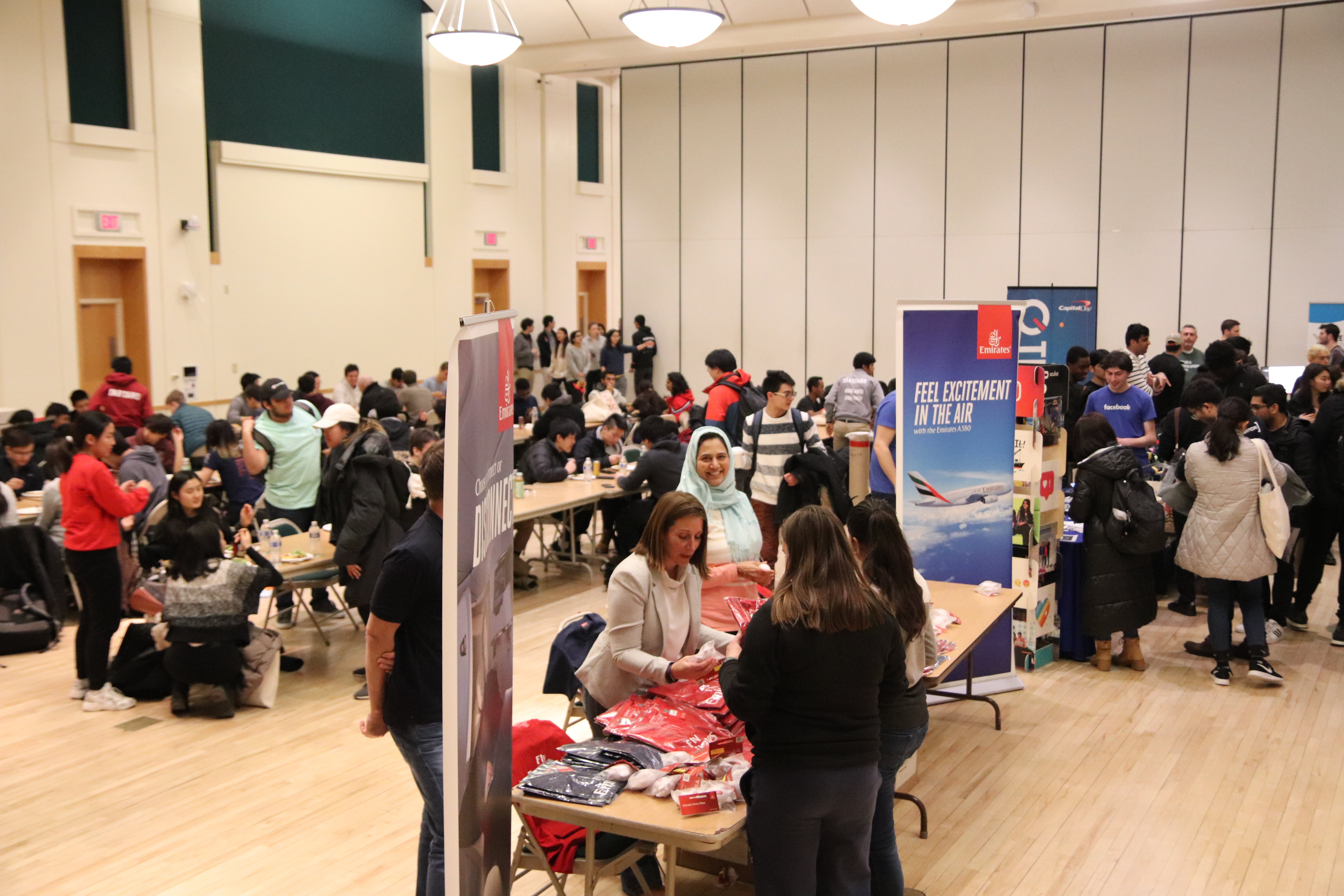 Students talk to job recruiters from TartanHacks sponsors in the Cohon Center. (credit: Courtesy of TartanHacks)

More than 400 students participants signed up for TartanHacks, committing themselves to a 24-hour-long hackathon beginning on Valentine’s Day. Though the emcees at the opening ceremony “guaranteed” that none of these participants would be single by the end of the Feb. 14 - 15 competition, the only certain outcome was the 51 projects that were submitted the next day.

Hacking was scheduled to begin at 6 p.m. on Friday, with participants spreading out over the Cohon University Center and the Gates-Hillman Center to work in teams of around four, on projects that were to be submitted the next day at 4:30 p.m.

The organizers, ScottyLabs, offered a grand prize of $2,000 named in honor of Scott Krulcik, a ScottyLabs member who passed away in 2018 shortly after graduating from Carnegie Mellon.

The event sponsors set challenges for the students. Emirates, the only diamond level sponsor, asked students to spend their Valentine's Day working on three separate challenges. The winning team, Emirates Skywards Improvements, developed a system integrated with the Emirates app to communicate with and allocate agents in the Dubai airport. They won a two-day-long trip to Dubai, where they will present their hackathon project to Emirates management.

Some of the prizes focused on the goals of the projects in question. When it comes to social good, Principal Program manager Justin Garrett, who led a talk on “AI for Good” during TartanHacks, said, “we believe that technology is the ‘how,’” and that the solutions students come up with during these hackathons are the “‘what’, or the idea.” Microsoft Senior Regional Program Manager Nitya Narasimhan reinforced the importance for the company of staying connected to students and developers in the Pittsburgh region.

Many teams were not thinking about the challenges as they decided what to work on for the next 24 hours. “We came without thinking about any of the prizes,” said Karissa Prayogo, a senior in science technology and international affairs, who traveled from Georgetown with her friends came from Georgetown with the idea for their project, Flashpopz. Instead, she and her friends came because “the hackathon would be a good place to carve out time” to work on the app, which seeks to teach Japanese using vocabulary from anime episodes.

Though they did not set out with their sights on any prize, the Flashpopz team was selected to give a final presentation at the closing ceremonies, and they won the Microsoft “Hack for Good” prize, winning Surface Gos and $1000 for a charity.

First-years were the largest group at the hackathon, accounting for 195 out of the 475 registered. “I’ve never done [a hackathon] before, so this is to see how it goes,” said first-year Maggie Huang, whose team won Nefeli Networks prize for “Best Environment Hack.” The experience, said Huang, was “simultaneously very fun and very frustrating,” but the process was made easier by the “very helpful” mentors roaming around and assisting teams.

Edward Garemo, a first-year in computer science, joked that he participated in the hackathon because they were “told we’d find love.” His teammate, Sean Swayze, a first year in economics, piped up that it hadn’t worked because they had spent 18 hours in the Class of ‘87 room in the UC working on their project.

More seriously, Garemo said that they were there because they wanted to take advantage of the computer science resources to work on their project, Crossword Solver, where they attempted to use new data structures and heuristics to tackle the much-attempted challenge of automatically solving crossword puzzles.

“No one else has cracked it, so it would be somewhat arrogant to believe we could do it in 24 hours,” said Garemo, referencing the many academic papers that have been published attempting to crack the problem. The “First Penguin Award,” inspired by one given out in Randy Pausch’s classes for the most “glorious failure” made Garemo believe, “if you try something and really fail, there is still an opportunity for you to win.” Crossword Solvers did eventually win the First Penguin Award, getting stuffed penguins along with another team, T.A.C.O.

The Scott Krulcik prize was awarded to InSights AR, a team that developed an AR headset that identified people from profiles and displayed their names to “figure out who they are without actually meeting them,” said team member and sophomore SCS student Audrey Tzeng. Their project is intended for large business meetings or conferences.