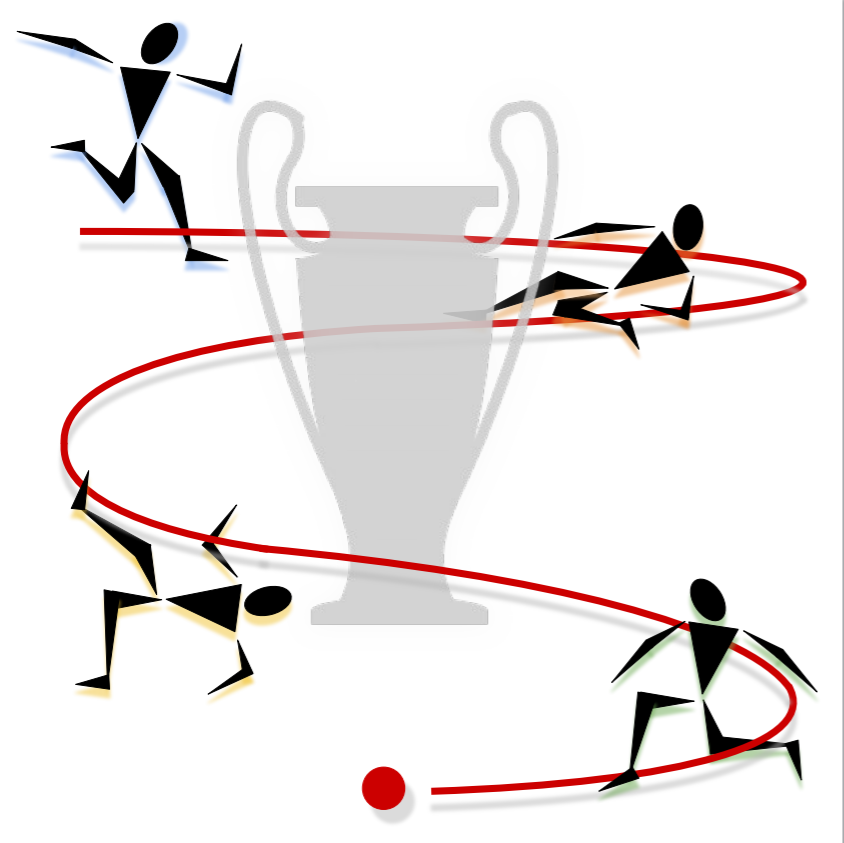 With three of the six Matchdays gone in the 2020/21 UEFA Champions League season, it’s time for a quick recap of the games and standings so far:

Group A
A tightly-contested match between Salzburg and Lokomotiv Moscow on Matchday 1 saw each side unable to gain a substantial lead, and the game ended 2-2. In Germany, however, reigning champions Bayern Munich put on a phenomenal performance against a sub-par Atlético Madrid, putting up a 4-0 scoreline.

Atléti played much better on Matchday 2. Though they lost an early lead to Salzburg, two goals from João Félix were enough to rescue all three points for the hosts. In Moscow, an early goal by Leon Goretzka gave the defending champions the lead. An equalizer from Anton Miranchuk proved to be in vain, as a late goal from Joshua Kimmich sealed the deal for Bayern.

Lokomotiv Moscow would not let history repeat itself, however. After equalizing against an early goal by Atlético Madrid on Matchday 3, they successfully held off the much stronger Spanish side to end the match 1-1. However, Atléti retained their position of second in the group on goal difference. In Salzburg, the hosts seemed to have a chance at dethroning the defending champions, opening the scoring after four minutes. Bayern then scored two to take the lead, but a 66th minute equalizer by Masaya Okugawa gave Salzburg a shot at victory. However, any such hopes were shut down when Bayern scored four times within the last 15 minutes to make the final scoreline 6-2. This secured the German giants’ spot at the top of Group A, extended their UCL win-streak to 14 games, and left Salzburg at the bottom of the table.

Group B
In perhaps the most surprising game on Matchday 1, Real Madrid conceded three goals at home against Shakhtar Donetsk in the first half. The 2018 champions managed to score two in the second half, but it wasn’t enough to stop Shakhtar from taking home all three points. Inter Milan and Borussia Mönchengladbach held each other to a goalless first half until a shot by Romelu Lukaku put the hosts in front. Two successive goals from Gladbach saw them overtake the Italian side, but a second goal from Lukaku recovered a point for Inter.

Gladbach’s misfortunes continued into Matchday 2, where they lost a 2-goal lead in the final six minutes of the game against Real Madrid. Against Shakhtar Donetsk, Inter Milan put on a strong performance, but they were unable to capitalize on any chances in a match that eventually ended goalless.

When Borussia Mönchengladbach scored inside eight minutes of play on Matchday 3, however, it was a sign of things to come. In a show of complete dominance, Gladbach put six goals past hosts Shakhtar Donetsk (including a hattrick by Alassane Pléa) to elevate themselves to the top of Group B. At the Bernabéu, Real Madrid started off well, establishing a two-goal lead. However, Inter Milan matched the home side, also scoring two to equalize. An 80th minute goal by Rodrygo finally gave the hosts their first win in this season’s UCL group stage, putting them third in Group B and leaving Inter at the bottom, winless.

Group C
Porto started out well against Manchester City, taking the lead after 14 minutes. Two converted set-pieces from City put them ahead of the Portuguese side, however, and a third quickly solidified their win. In Piraeus, it looked like visitors Marseille would hold Olympiacos to a draw, but a late header from Ahmed Mahgoub won all three points for the hosts.

Olympiacos’s luck would not hold in Matchday 2, however. An early mistake practically gifted Porto the lead, and a late goal from Sérgio Oliveira sealed the win for the Primeira Liga champions. In Marseille, there was no doubt over who would come out on top. Manchester City dominated the game, and the 3-0 scoreline is proof of it.

Against Porto, Marseille was unable to capitalize on any opportunities, and the home team took full advantage, putting three past Steve Mandanda and pulling themselves up to second in the group, leaving Marseille rock bottom. Olympiacos found themselves in a similar position as Marseille. Completely outmatched by Manchester City, they relinquished all three points in a 3-0 game that put City solidly at the top of Group C.

Group D
Ajax and Liverpool looked well-matched against each other, with only an unfortunate own goal from Nicolás Tagliafico giving the Reds the win. In contrast, Atalanta overpowered Danish side Midtjylland in a deserved 4-0 victory.

On Matchday 2, Ajax started strong against Atalanta, sporting a 2-0 lead after the first half. However, two second-half goals from Duván Zapata salvaged a point for the hosts. Midtjylland put up a valiant effort against the Premier League champions, but goals from Diogo Jota and Mo Salah secured all three points for Liverpool.

In yet another Matchday 3 game ending with a large scoreline and a hattrick, Liverpool breezed past Atalanta by a final score of 5-0, with Diogo Jota bagging three goals, securing their place at the top of Group D. Ajax started off strong against Midtjylland, with Antony scoring inside the first minute and Dušan Tadić converting a free kick inside the box in the 13th minute. The hosts attempted to fight back, with Anders Dreyer netting a goal in the 18th minute, but made no other headway, leaving Midtjylland at the bottom of Group D while Ajax clung to second, ahead of Atalanta by a single point in goal difference.

Group E
On Matchday 1, Serhou Guirassy opened the scoring with a penalty for Rennes, but an equalizer by Krasnodar’s Cristian Ramírez forced the hosts to split the points. Likewise, Chelsea and Sevilla had to settle for one point each after a goalless match.

Chelsea would find their momentum in Russia, however, scoring four goals against Krasnodar on Matchday 2 to come away with all three points. In Sevilla, the home side completely dictated the game, but Rennes put up an admirable defense. Still, a well-controlled volley by Luuk de Jong put Sevilla up 1-0, and the scoreline stayed there until the end of the match.

Chelsea continued their streak on Matchday 3 against Rennes. Two penalties taken by Timo Werner put the hosts up by two, and a third goal by Tammy Abraham secured Chelsea’s spot at the top of Group E, while Rennes was left at the bottom. Against Sevilla, Krasnodar had a rather impressive start, managing to open the scoring in the 17th minute and double their lead in the 21st. However, they were unable to keep up the momentum, and three subsequent goals by the stronger Spanish side gave Sevilla the victory, placing them right behind Chelsea in Group E, second only by goal difference.

Group F
Zenit St. Petersburg and Club Brugge looked evenly matched on Matchday 1 until Emmanuel Bonaventure bundled in a goal in the 63rd minute. A shot from Dejan Lovren ricocheted off Club Brugge keeper Ethan Horvath to let Zenit draw level, but a goal from young Charles De Ketelaere in the last 90 seconds gave Club Brugge their first UCL group stage win in nearly two years. In contrast, Dortmund was unable to perform against Lazio, who capitalized on the visitors’ mistakes to get an early two-goal lead. A goal from Erling Haaland gave the German side some hope, but a goal by Jean-Daniel Akpro sealed the deal for I Biancocelesti.

Zenit’s miseries only worsened in their second game. They held Dortmund off for most of the match, but a foul by Vyacheslav Karavayev presented Dortmund with a penalty, which Jadon Sancho cooly converted. Haaland then finished the job with a second goal in stoppage time. Lazio found that they couldn’t capitalize on their momentum. Though they scored early against Club Brugge, a penalty tied the score, and they were forced to split the points with the hosts.

On Matchday 3, Zenit started well against Lazio, with Aleksandr Yerokhin scoring for the hosts in the 32nd minute. However, a late-game equalizer by Felipe Caicedo forced Zenit to split the points and stay at the bottom of Group F while Lazio climbed to second. In yet another 3-0 game, Borussia Dortmund emerged victorious against Club Brugge through an opener by Thorgan Hazard and a brace from Haaland. This placed Die Schwarzgelben at the top of Group F.

Group G
Dynamo Kyiv put on a resilient first half against Italian giants Juventus, but two goals from Álvaro Morata in the second half sealed the win for the Old Lady. At Camp Nou, there was little contest between Barcelona and Ferencvárosi, with Barcelona dominating in a 5-1 performance and extending their unbeaten run at home to 37 games.

In Budapest, Viktor Tsygankov converted a penalty to give Dynamo their first UCL group stage goal in four years, which was quickly followed up by a second. However, the visitors were unable to keep the lead, and two second-half goals from Ferencvárosi salvaged a point for the hosts. A stroke of fortune found Ousmane Dembélé’s shot deflected into the back of the Juventus net, and a late penalty conversion by Lionel Messi found Barcelona victorious 2-0 in Turin.

An early penalty by Messi put Barcelona up 1-0 against Dynamo Kyiv on Matchday 3. A goal by Gerard Piqué extended their lead, but Viktor Tsygankov pulled one back in the 75th minute. The 2-1 win was enough for Barça to maintain their place at the top of Group G. Against Ferencvárosi, Juventus put on an unsurprisingly strong performance, netting four goals. A 90th minute goal by Franck Boli was too little, too late for Ferencvárosi, who stayed at the bottom of the table while Juve retained their second place.

Group H
In Paris, a penalty from Bruno Fernandes put visitors Manchester United up early in the first half, but a 55th minute own goal courtesy of Anthony Martial tied the score for Paris Saint-Germain. A late goal by Marcus Rashford delivered a 2-1 victory for the English side. Two goals from Angeliño put Leipzig up 2-0 against İstanbul Başakşehir after just 20 minutes of play time, and the score stood for the rest of the game.

İstanbul Başakşehir played much better at home on Matchday 2, and for a good portion of the match, it seemed like it could be anybody’s game. However, a later brace from Moise Kean secured the win for PSG. At Old Trafford, Leipzig seemed completely outmatched. Though they only conceded one goal in the first half, a Marcus Rashford hattrick plus a penalty by Martial in the last 20 minutes made the final scoreline 5-0 to Manchester United.

On Matchday 3, İstanbul Başakşehir played their best game yet, putting two past Manchester United before halftime. Though Martial scrambled one back for United in the 43rd minute, a goalless second half saw İstanbul Başakşehir take all three points. However, they remained at the bottom of the table and United stayed at the top, both on goal difference. PSG started well against Leipzig, with Ángel Di María opening scoring after six minutes. However, a well-placed shot by Christopher Nkunku and an Emil Forsberg penalty was enough for the hosts to edge out the visitors, leaving them second and third in Group H, respectively.