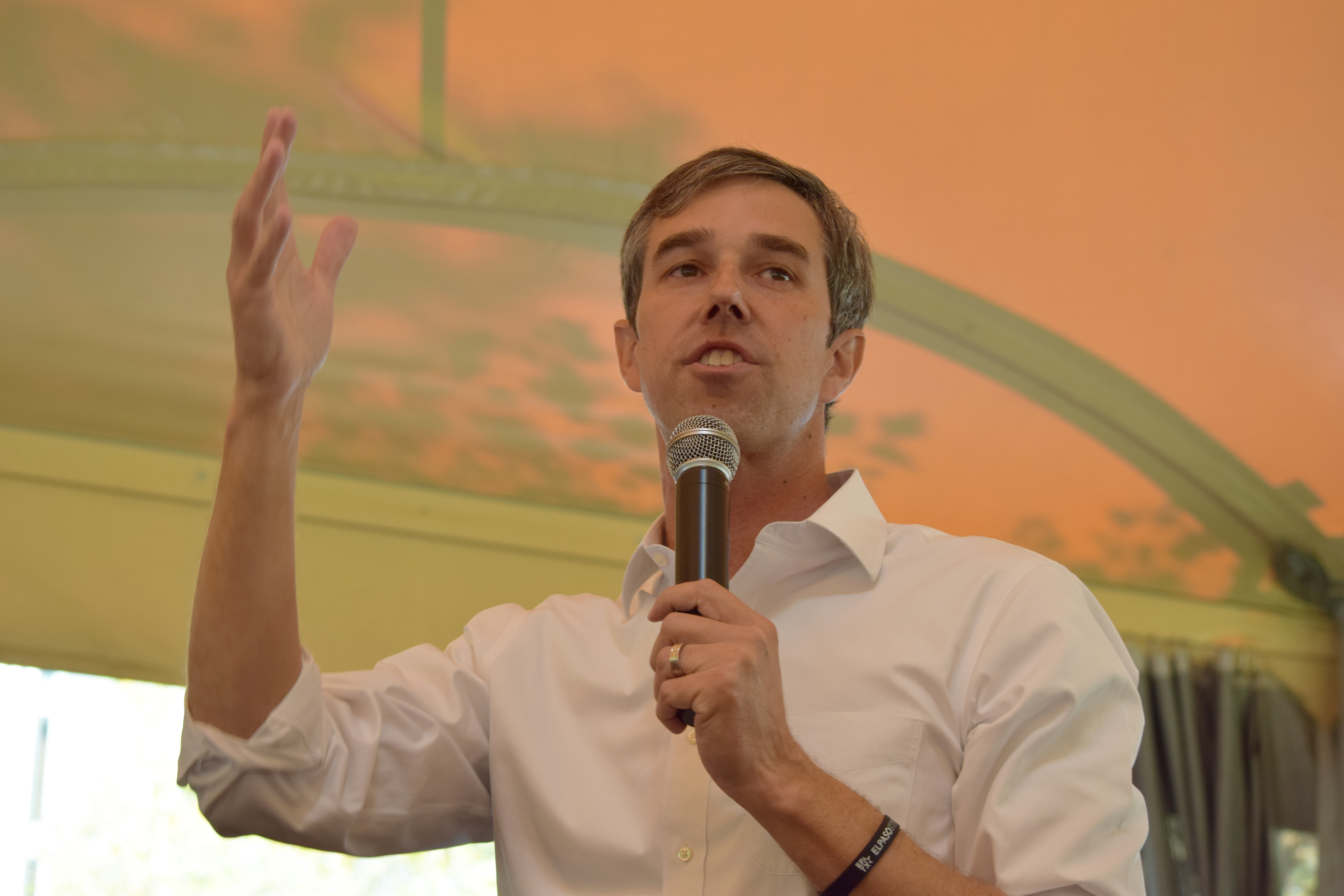 Democratic presidential candidate and former U.S. Representative Beto O’Rourke visited Pittsburgh on Wednesday as part of his 2020 presidential campaign. In the tent at Schenley Plaza, he hosted an event with supporters that was a mixture of town hall and rally. He is the fifth candidate to visit Pittsburgh since the campaign season began, following, most recently, a visit by Sen. Amy Klobuchar on Sept. 18.

According to an Aug. Franklin and Marshall poll, about 1% of Pennsylvanians support O'Rourke's candidacy.

Standing on a black box in the middle of a crowd, he started off his speech with some personal stories, including the story of his last visit to Pittsburgh that was 25 years ago, and the fact that he had just celebrated his 14th wedding anniversary. Recalling how he first met his wife on a blind date, O’Rourke remarked that “this was 15 years ago, before Tinder was invented, and we didn’t have the chance to swipe left or right."

He transitioned to reflecting on his roots in El Paso, Texas. El Paso, as a city bordering another large city in Mexico, is home to a thriving international community. O’Rourke remarked proudly about how many El Paso schools now implement fully immersive bilingual education.

He reminded the crowd that El Paso is one of the safest cities in America to rebuke to the current president’s rhetoric about how immigrants allegedly increase crime rates in America.

O’Rourke then pivoted to discussing the shooting at a Walmart in his hometown, where the shooter allegedly targeted Mexicans because he was angry about what the shooter termed a “Hispanic invasion” of Texas, and the large-scale ICE raid in Mississippi that targeted low-income migrants that arrested hundreds.

From there, O'Rourke addressed his proposed gun control, domestic terrorism, and immigration policies. He reiterated his intention to implement a mandatory buyback of assault-style rifles because he believes there is no reason for civilians to own military-style weapons, to cheers, and to make combating domestic terrorism a top priority for federal law enforcement. One of O'Rourke's key issues on the campaign has been this gun control rhetoric, which has earned him progressive support and conservative criticism.

O'Rourke told the crowd that ICE raids were sending a message of fear, and said that he intended to remove this fear aspect from these immigrants’ lives by legalizing undocumented immigrants and providing a path to citizenship for the young people brought to the US illegally as children known as Dreamers.

He brought up the drought in Guatemala that was forcing many families to escape north, and the fact that extreme weather events like it will become more common as the planet warms from human activity. “[The drought is] not caused by God or Mother Nature, but by you and me, our emissions,” he asserted.

He highlighted that places located at lower latitudes such as El Paso may be too hot to support life in the future if anthropogenic global warming goes unchecked. To combat this, he proposed that if he is elected as president, he would have a plan to implement carbon sequestration — processes that remove carbon from the atmosphere and thus reduce the percentage of greenhouse gases in the air — over the next decade. O’Rourke told people that as Americans, we should be taking a leadership role to “make sure we don’t cook this planet beyond supporting life.”

The rest of his speech touched on the key issues that Democrats have taken on: discrimination, healthcare, a $15 minimum wage.

He also proposed a healthcare plan with a mixture of public healthcare and private plans. He addressed the need to end discrimination in the workplace by amending the Equal Rights Amendment, and criticized the fact that it is legal in Texas and other states to fire someone for their sexual orientation and to prohibit same-sex couples from adopting children.

O'Rourke rallied his supporters by ending with a statement on the high incarceration rate in the US, saying that the “war on drugs became [a] war on people,” especially minorities. He called for reparations to be made to descendants of slaves and for the nation to acknowledge both the deeper legacy of slavery and how it still disadvantages minorities to this day.

The former Texas congressman spent much of the rest of the event taking questions from the audience. One man in a wheelchair asked about the proposal for paper ballots to prevent election hacking, noting that some people like him cannot pick up a pencil and asked if there would be accommodations for disabilities. In response, O’Rourke promised to enact a provision for disabled people to be able to get help in voting and even promised to name it after the man who asked the question.

A young woman from El Paso asked the candidate about gun control and reflected on her worries after the mass shootings in both El Paso and Pittsburgh, to which O’Rourke shared a story he had heard of a Mexican woman who refused to play traditional Mexican music in public after the shooting in El Paso. He also seemed to express that he understood how some gun owners liked the shooting power of assault-style weapons, but noted that there have been gun owners who told him that although they were supporters of Trump, they also wanted to keep our children safe and understood the premise behind O’Rourke’s gun buyback proposal.

In response to a question about how to pay for this buyback, he proposed taxing capital at the same level as income, raising the corporate tax rate to at least 28%, and ending the foreign wars America is involved in to save the money otherwise spent on these wars.

He concluded the event by greeting some supporters in the front and snapping the usual crowd selfies.