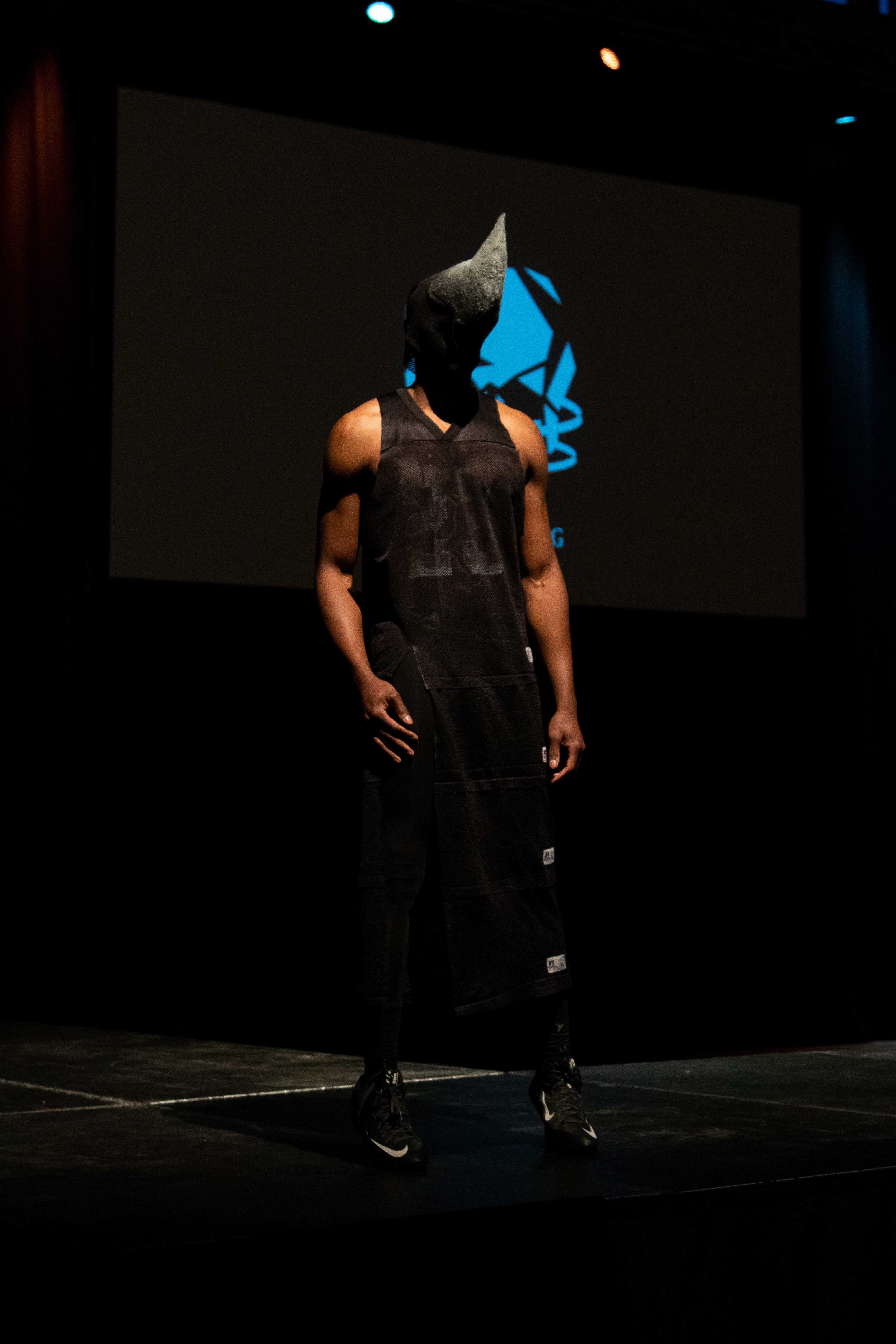 A prominent look from the first line of the show, Keegan Barone’s Headswing. (credit: Courtesy of Tyler Davis)

This past Saturday, the 32nd annual SPIRIT Fashion Show filled Wiegand Gymnasium with a multimedia showcase of fashion, dance, music, and visual art. The show was held in Wiegand for the first time, allowing for a larger crowd than past SPIRIT Fashion Show events. Even with the bigger venue, the event sold out of general admission tickets days before the show.

More than an hour before showtime, lines formed from the gymnasium doors to the fences by the University Center parking lot. When the doors opened at 7:15 p.m., the well-lit Wiegand floor was slowly filled in by attendees: friends chatting and greeting each other in the sold-out general admissions sections and family members and friends filling in the front VIP rows holding flowers.

The theme of the show this year was “Apollo,” which show posters said would “take you on a journey of introspection — the internal journey of discovering our own inner light and rectifying our flaws to approach a liberating sense of self-realization.” As the show began, a voice went over the loudspeaker: “Apollo, guide me to the light.”

On the U-shaped stage, looks varied as much as the acts themselves: in addition to traditional fashion lines, dance acts, and musicians, combinations of all these mediums shared the stage.

In the first line, Keegan Barone’s Headswing, athletic motifs were prevalent, such as Nike cleats being fashioned into heels. Arthur Brown’s Faster than Light showed the creative allowances designers were granted: behind the models, video projections accompanied a futuristic line where lab coats and scientific themes met modern streetwear.

Later in the show, Kwaku Agyemang and Justis Pitt Goodson’s Brownmill showcased a collection of ready-to-wear clothing that channeled thrifted East-coast prep wear. The closing line, Torn, showcased sheer and ethereal looks by Catherine Mondoa, who both designed the line and modeled for it.

Each line was met with applause and support, as the show was no quiet affair.

The creative freedom of designers was observable in both the use of designer-specific projections and in the difference in presentations: some lines incorporated choreography, while some just walked outright. As creative lead and model Matthew Henderson told The Tartan, “SPIRIT, in comparison to [Lunar Gala], is a little more open-ended.”

Henderson, who did web design for this year’s show in addition to ticketing and modeling, expressed excitement in the shift to being hosted in Wiegand Gymnasium, saying that “more people would be able to go to the show” this year. That said, he mentioned that “the logistics of getting access to the space [were] a lot harder.”

Between lines, various artistic acts took the stage. Emily Wu performed an original song after the first three lines. Sabrina Clarke danced solo later in the show, and Spirit Dance filled the entire U-shaped stage with a large group dance. Malcolm Odeozor and friends provided a two-track selection of smiley hip-hop, which was met enthusiastically by the crowd.

At intermission, Andrew Conlon, a sophomore in computer science, noted that the show this year was “pretty well choreographed.” He added that, “they did it in Rangos Ballroom last year, and the stage was different, it definitely seems like an upgrade [this year], probably a budget boost.” Leroy Gary, a fifth year studying electrical and computer engineering, added that this year, “they were definitely well publicized.”

After the show concluded at 10:30 p.m., Executive Director Mecca Parker addressed the crowd, saying, “there were times where it was so disparaging… but we made it, we did.” Thanking Tiara Wicks, Logistics Director, who introduced him, Parker added thanks to donors, designers, production crew, and to SPIRIT as a whole, saying, “it takes so many people to get to where we are right now.”

Parker continued that SPIRIT Fashion Show is meant to be an outlet for “multicultural people to share their designs, their art, their emotions, their personalities, their stories.” This year, as he was presented several bottles of “very expensive” champagne by executive board members, Parker said the turnout and work was “inspiring.” “I love all of you guys,” he concluded in his address.