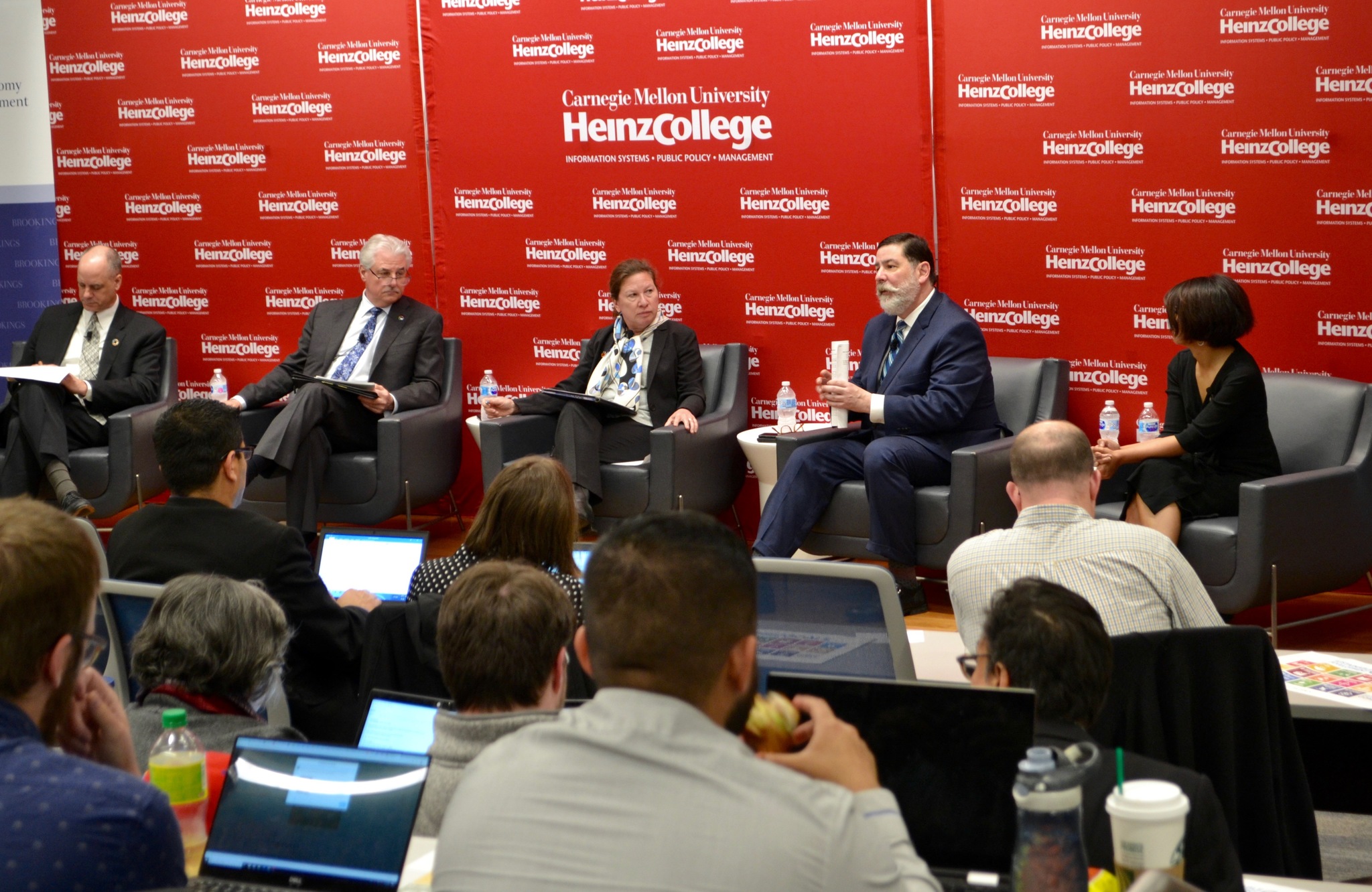 Pittsburgh Mayor Bill Peduto is continuing his effort to get his stalled fund for social and sustainable action in Pittsburgh, OnePGH, off the ground.

A panel this past Thursday titled “The City of Pittsburgh, OnePGH, and Alignment with the Sustainable Development Goals” brought this discussion to Carnegie Mellon’s campus. Speaking alongside Peduto was the head of Heinz College in Washington, D.C., Amb. Sarah Mendelson, serving as the panel moderator, and panelists Leah Lizarondo, Heinz alum and CEO of 412Food Rescue, Jerry MacCleary, CEO of materials company Covestro, and Anthony Pipa, Senior Fellow at the Brookings Institution.

The talk was framed around Pittsburgh’s interpretation of the Sustainable Development Goals (SDGs): 17 markers developed by the U.N. as a guide for global growth. These goals, Peduto claims, align with the 10 areas developed by the Rockefeller Foundation and the City of Pittsburgh for the city’s 12-year resiliency plan. These, in turn, became Peduto’s proposed OnePGH fund, which would funnel money from the city, local nonprofits, and corporations to organizations working toward 47 planned projects.

Peduto emphasized the importance of action on the city level, citing a “vacuum of leadership in Washington.” However, according to Peduto, OnePGH is neccesary because the City of Pittsburgh does not have the leverage to act on its own. “[The projects] can’t happen under old models. Old models are city government,” said Peduto.

“We don’t have the capacity to address hunger and poverty,” said Peduto, “but if we create a separate organization that then helps those that are on the ground addressing hunger and homelessness, and being able to use that organization to prop up the nonprofits throughout the city and this region, then we can get to our goals together.”

MacCleary, when asked by Mendelson how private industry can fit into the SDGs, said that Covestro was motivated by the need to “attract the best and the brightest, and if you’re not doing the right things, you’re not going to have a sustainable business for very long.”

Lizarondo was the respresentitive on the panel of the nonprofits that OnePGH might partner with. She highlighted how her organization, 412Food Rescue, represents a combination of social action and sustainability efforts. “SDG 12.3 is ‘reduce food waste,’ SDG 2 is ‘end hunger,’ so these are interconnected,” she said.

Peduto notably floated an idea during the panel to influence outcomes by leveraging the purchasing power of cities. If cities bought only from distributors who didn’t make “cop killer” bullets or sell automatic weapons to civilians, Peduto asked, “Imagine the effect that would have on the market. Now imagine the same thing if we were purchasing based on SDGs. We could change the industry internally.”

“If you want to change behavior, you have to change how you procure,” agreed MacCleary, citing Covestro’s policy of working with companies that have environmental action plans, continuing, “I think that you can get there without the regulations and legislation sometimes.”

When speaking to members of the press after the event, Peduto was pressed about the timeline for OnePGH.

“We don’t have a hard commitment that people are looking for from the universities and the hospitals. We have a commitment, but [haven’t drilled] down to specifically what that will be,” said Peduto in response to a question about the launch of OnePGH, which has failed to meet Peduto’s timeline, continuing that he doesn’t want to progress without concrete numbers: “I don’t really want to have an announcement just with a plan.”

These contributions to the fund are expected to be made up in large part by large tax-exempt organizations like UPMC, Highmark, the University of Pittsburgh, and Carnegie Mellon. Nonprofits own 36 percent of the city’s land, according to the Pittsburgh Post-Gazette, for which the city collects almost no tax revenue. Elected officials, the Post-Gazette finds, often point out that these same organizations benefit from city services. This fund would be an alternative to voluntary “payments in lieu of taxes” to the city government.

The plan has received criticism from County Controller Chelsa Wagner, who told the Post-Gazette that “the OnePGH concept, to the extent that it has been defined at all, smacks of the outsourcing of government to elite, private interests.”

In response, Peduto told reporters that the alternative, payments in lieu of taxes, would be smaller and directed towards the current city budget instead of the resiliency goals outlined for OnePGH. “If we’re going to address the major issues facing the city over the next 12 years, we need to be able to do it in a way that is outside of the way it was done in the past.”