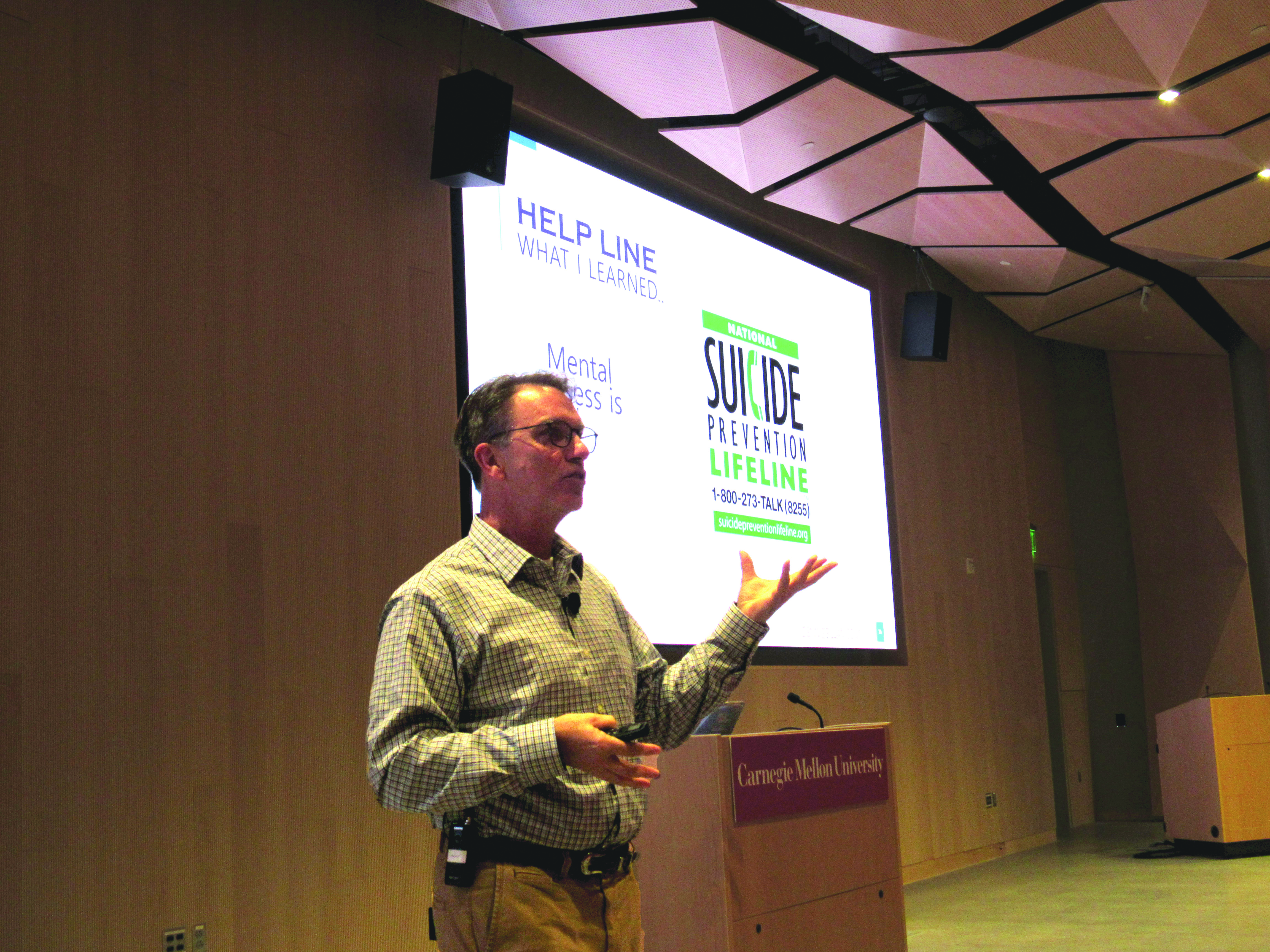 On Feb. 10, mental health speaker Dennis Gillan came to Carnegie Mellon to give his presentation, “Suicide Stinks.” He shared his personal experiences with mental health and how losing both of his brothers to suicide has impacted him.

Junior Mikey Fernandez, president of Phi Delta Theta, invited Gillan to Carnegie Mellon. This past summer, he had heard Gillan speak for the Phi Delta Theta Emerging Leaders. Although Fernandez had not previously felt strongly about mental health, he was in awe at Gillan’s presentation. “It was the best presentation I had ever seen,” he recalled. Despite the gravity of the topic and Gillan’s personal impact from mental health, he managed to make his presentation not daunting and “not super heavy.”

Gillan studied accounting at West Virginia University and does not have a background in psychology. In 1983, while he was a student, he was preparing for two exams when one of his sisters called him saying “Mark died in a car accident.” He later learned that it was no accident that killed his brother; it was a suicide.

Although the stigma surrounding mental health and suicide persists today, it did even more so back then. Gillan went home right after hearing the news, but he returned to school the following Tuesday and acted as though nothing had happened. “I tried to put it in a box and put it away,” he explained. At just 20 years old without knowing how to cope, he turned to alcohol to deal with his depression. Eleven years later, he lost his other brother, Matt.

Losing both his brothers led Gillan to realize he needed change. The first was to stop drinking. After Matt’s funeral, he made a commitment to sober up. In his presentation, he proudly shared that he was 8961 days sober.

The “best decision I ever made,” however, was seeking counseling, Gillan stated. Regarding professional help, Gillan had only one regret: he wished he had done it sooner. The pain and grief hadn’t stopped, but seeing a counselor helped recovery become that much more manageable. He used his testimony and experience with counseling to encourage students and faculty to take advantage of the resources available to them. Some of those listed are provided by the university such as Counseling and Psychological Services (CaPS) while some are available in the general Pittsburgh area such as Western Psychiatric Institute and Clinic (WPIC). Help does not stop outside Pittsburgh; resources such as the Crisis Text Line (text “HOME” to 741741) and the National Suicide Hotline (1-800-273-8255) remain open to anyone across the nation.

Over the years, Gillan has done more than just speaking out about mental health. He works with the suicide prevention hotline on Thursday nights from 8 p.m. to 12 a.m. Before he could start, he went through a 12-week training. He was ready for the content of the calls, but nothing could have prepared him with the volume of the calls. Too many people in our country have nowhere to turn to, whether it be because they cannot afford to seek out professional help, are too scared due to the stigma built up around mental health, or they are otherwise in a position where getting help is not an option.

One remarkable story of a caller resonated with him. Someone whom he referred to as Kyle called the hotline on behalf of a friend. Kyle received text messages from his friend that appeared to allude to suicide. “Kyle, you’ve been a good friend” soon followed with “Kyle, I’ll see you from the other side.” Kyle received no response following the second message.

Breaking the standards and regulations for callers in the suicide hotline, Gillan asked Kyle for his friend’s number to check on the friend’s safety himself. Gillan found that the friend was an only child who was failing college. As a result, he felt as though there was no resolve other than suicide. At the end of the call, he and Gillan created a plan to tell his parents. There’s no way of knowing whether Kyle or his friend is okay today, but looking back, Gillan reflected saying that they decided to answer the question “where do we go from here? It’s what we do.”

“CMU is gonna bend you but not gonna break you,” said Gillan. Carnegie Mellon is ranked as one of the most stressful and sleep-deprived universities in the country, and there is much work that needs to be done to promote wellness. However, the university and its community is slowly starting initiatives to create an environment that welcomes these important discussions.

“Delad glädje är dubbel glädje; delad sorg är halv sorg,” Gillan shared towards the end of his presentation. This Swedish saying translates to “a shared joy is a double joy; a shared sorrow is half a sorrow.” Just as we share our joys to our classmates and followers on social media, it’s time that our community here at Carnegie Mellon shares our sorrows and hardships. Even if continuously halving sorrows can never truly erase them, we must continue to try and do better in cultivating a safe and caring community that supports others.