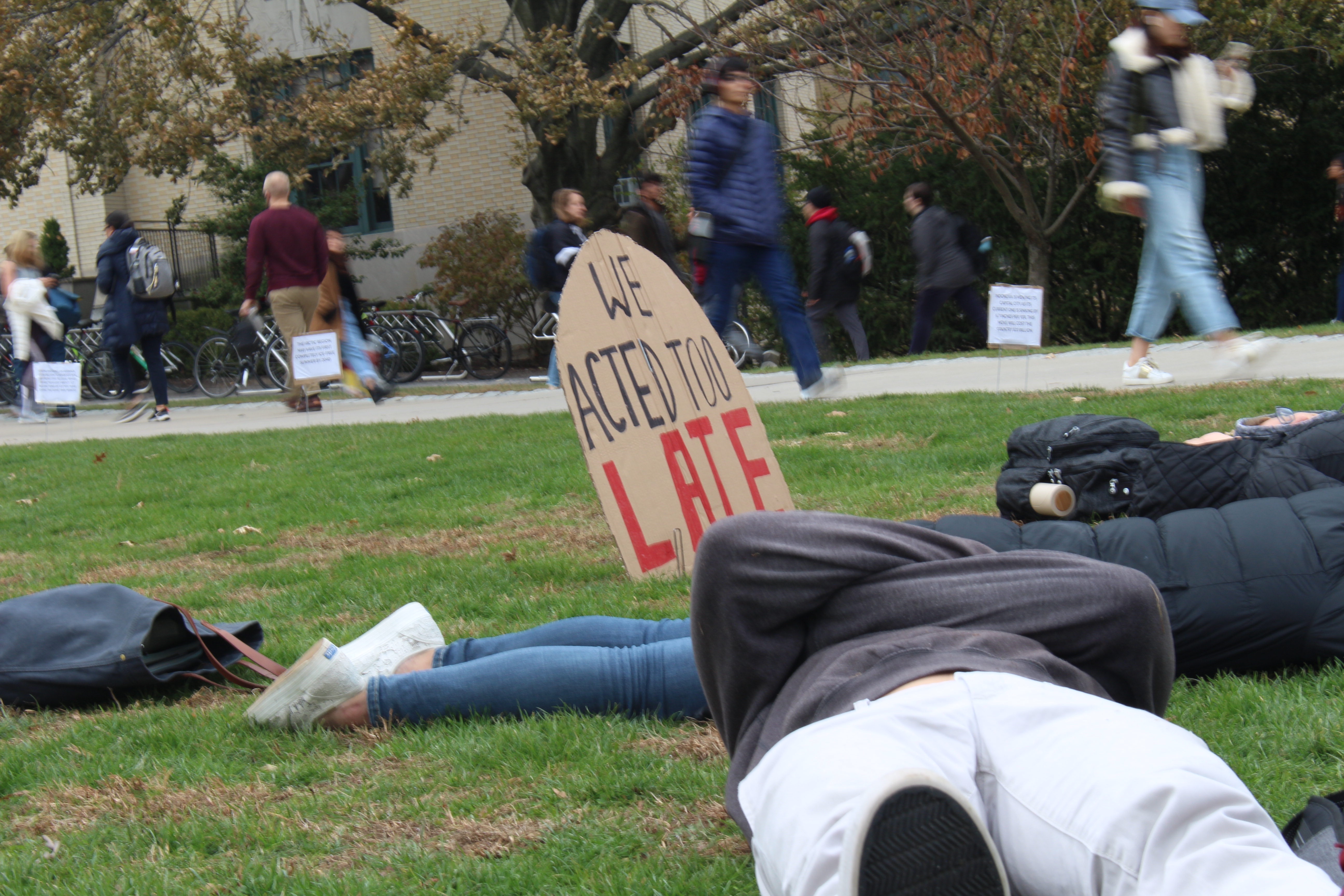 Students lie down in front of the Fence and Doherty Hall to protest inaction on climate change inaction. The protest was a part of campus takeover by Sustainable Earth, a student enviromental advocacy group. (credit: Nora Mattson/Editor-in-Chief)

On Thursday, a group of students played dead in the center of campus to raise awareness about climate change. They lay on their backs and stayed still for hours while surrounded by a set of faux-grave stones, painted with foreboding messages. “We acted too late,” read one. “Business as usual = death,” read another.

The students belonged to Sustainable Earth, a small student organization aiming to encourage living sustainable. Nicole Shi, the president of Sustainable Earth, called the form of protest a “die-in.” Shi laid down and started the die-in at 8 a.m., before any classes began. “It was 28 degrees,” said Shi. “I was definitely bundled up. I wore like 8 layers plus a blanket.” She participated for nine hours, with a few breaks, until 5 p.m.

Sustainable Earth used to focus on personal forms of sustainable living, but in recent years they’ve become more politically active. “Politics was no longer something that we could ignore,” Shi said, “we realized that we really had to ramp up our political efforts.” Shi continued, “especially with the 2020 elections coming up, and also how Trump has been drawing back on a lot of environmental policies.”

Sustainable Earth has adopted a more intense tone in response to the political climate. The organization’s die-in was part of their campus takeover week, during which they tabled to advocate for political participation, and painted the fence with a quote from Greta Thunberg’s address to the United Nations: “Our house is on fire.” They also co-hosted a watch party for the democratic debate with The Roosevelt Institute, Students for Warren, Tartans for Bernie, and Swing Left.

“Climate change is not putting a trigger to your head. It’s not that direct,” said Shi. “It’s a slow build up of effects, but I think we’re definitely going in a direction that is very depressing, and it’s scary.”

In the 2016 election, nearly half of the voting population did not cast a ballot. Shi is concerned that if that turnout continues to be low, environmental issues will end up on the back burner.

Sustainable Earth has been working to advocate for political participation, but they aren’t planning to endorse any candidates. Sustainable Earth recently made cards that blindly show the environmental policies of the top-polling presidential candidates. The front of the cards show the policies, and the candidates’ names are only visible on back side.
Shi thinks that it is important to live sustainably, but that advocating for environmentally-friendly policy is the most effective way to combat climate change.

“I think that people find climate change so impossible to solve that its almost debilitating,” said Shi. “But I think that we need as many people as possible advocating for it because... even if the effects by 2030 are going to be irreversible... we still have time and we still need to remain hopeful.”