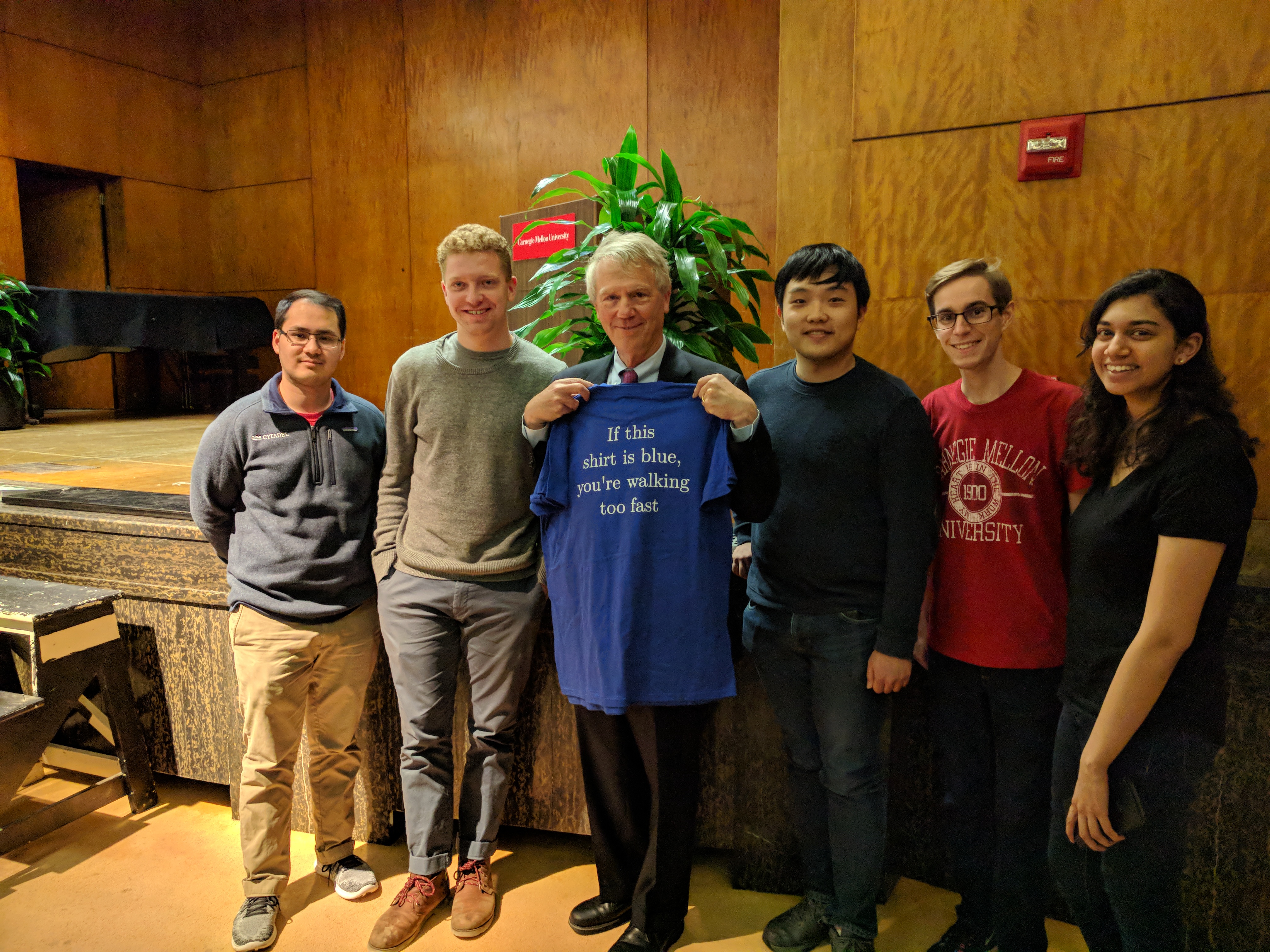 “We live in a world in which visible matter isn’t the main kind of stuff.”

This is how renowned astronomer Robert Kirshner introduced dark energy and dark matter, two of the main topics of his 2018 Buhl Lecture.

The Buhl Lecture is an annual lecture sponsored by Carnegie Mellon’s physics department and is typically given by a leader in the field of physics research. Kirshner, a professor at Harvard for over 30 years, used observations of supernovae to track cosmic expansion. His research was foundational to the discovery that the universe’s expansion is accelerating. An accelerating universe, in turn, indicates the existence of dark energy.

Kirshner’s lecture, entitled “Exploding Stars, Dark Energy, and the Accelerating Cosmos,” gave an overview of the history of cosmology, explaining landmark discoveries one-by-one and tying them together to give non-technical listeners a well-rounded picture of the field of cosmology — culminating in current research that attempts to understand dark matter and dark energy.

Kirshner’s story, beginning in the 1400s and continuing through the present, illuminated the connections between advances in technology and advances in human understanding of the cosmos — and the fact that often, the two do not advance at the same rate. The well-known research

Kirshner covered included Henrietta Swan Leavitt’s work on variable stars, as well as Hubble’s famous proof that the universe is expanding based on observations that when you look at objects in the cosmos, everything in the universe appears to be moving away from you.

“Now, doesn’t this mean that you’re at the center of the universe? I have to say, at Harvard, many of the faculty believe that’s true,” Kirshner quipped (in truth, the universe has no center).

With each historical example, Kirshner noted that our capacity to observe cosmological phenomena is usually far ahead of our capacity to determine what’s causing the phenomena we see.
This theme set a precedent for the talk’s culmination in the introduction of dark matter and dark energy.

Kirshner stressed repeatedly that dark energy really exists — because its effects are observable and documented — even if we don’t know exactly what it is.

The lecture was peppered with humor and rich analogies. At one point, Kirshner put up a slide showing a Japanese woodcut of a landscape featuring snow-covered mountains. “What do you see?” he asked.

“Mountains? Not really. What you’re looking at is the snow on the mountains. If you were to travel here, what you’d actually see is the light reflected off the snow, which is in the shape of the mountains.”

It’s the same with dark matter: “We know it’s there because we can see its effects.”

As Kirshner explained, astronomer Vera Rubin observed in the mid-twentieth century that there was a discrepancy between how fast galaxies were expected to rotate and how fast they were actually observed to be rotating: galaxies were rotating much faster than they should be able to. The gravity of the stars within them was not strong enough to hold them together at those speeds, and it seemed as though they should be flying apart — unless there was more matter there, that had somehow not been detected. This theorized extra, undetectable stuff holding galaxies together is dark matter.

Dark energy, though a completely separate phenomenon from dark matter, was discovered in a similar situation, where the values predicted by known physics differed from what was actually being observed.

If the only substance universe was matter, as known physics tells us, the universe’s expansion would not be speeding up. All the galaxies in the universe would gravitate toward each other.

But observations tell us that on average, most things in the universe are moving away from each other, and their speed is increasing. Something is counteracting gravity and accelerating the universe’s expansion — a kind of negative pressure, or anti-gravity force.

Despite not really being a kind of energy, this unknown pressure has been labeled “dark energy” to reflect the mystery of “dark matter.”

After the talk, members of Carnegie Mellon’s Society of Physics Students presented Kirshner with a physics department t-shirt. Though most were already familiar with the subject matter at a depth beyond what the lecture covered, they appreciated Kirshner’s expertise and lecturing style.

“The analogies he used were really well chosen. They helped me understand it at less of an academic level and more of an intuitive level,” said Dylan Steele, a senior studying physics.

Physics professor Scott Dodelson, who heads the department, agreed. “The lecture was great. He was funny, and very clear... He was one of the leaders [in cosmological research], and he probably should have gotten the Nobel Prize... When a leader in the field can explain things that clearly, it’s very impressive.”

“I don’t know how that makes you feel. It makes me feel pretty special.”