The word activists are looking for is "rights," not "privilege" 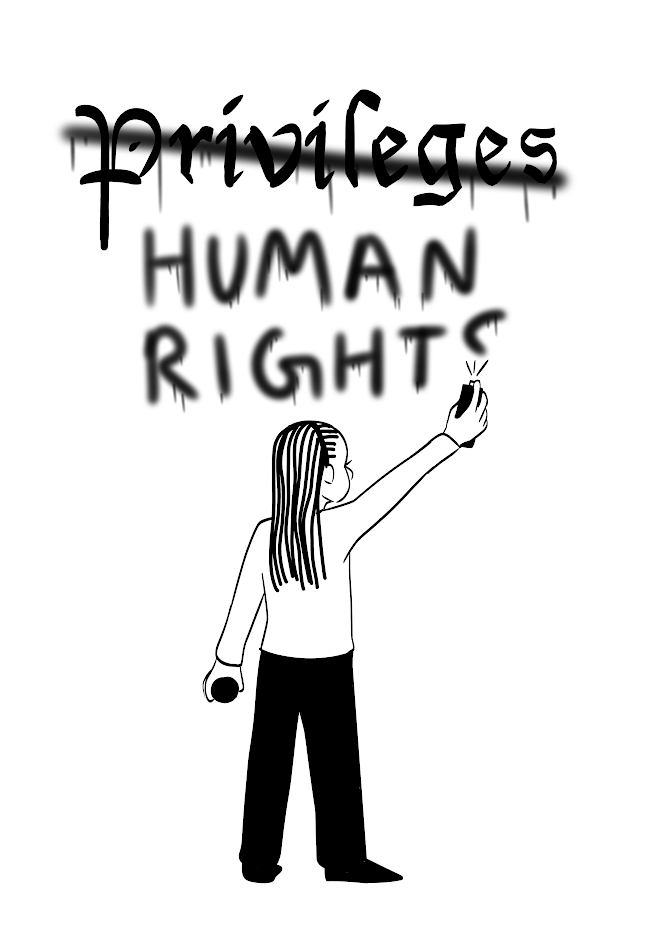 About a year ago, I wrote an article in The Tartan about race and privilege. In the piece, I argued that all white people are inherently privileged and systemically racist. The article seemed to be mostly positively received, but I found that I had to explain and defend my argument to some of my friends — ones who strike me as good people who genuinely care about correcting systems of oppression — more than I had expected to, before they could get it. It seemed that the words “racist” and “privileged” meant something different to them than what I had intended.

After thinking more about activist language, I have come to the conclusion that the word “privilege” does not effectively communicate what activists want it to. In the word’s normal usage, a “privilege” is something extra that must be earned. Privileges are different from rights in that they are unnecessary benefits. For instance, access to clean water is a right, while access to designer handbags is a privilege. When liberal activists describe “white privilege” or “male privilege,” however, we use the word “privilege,” but we are actually talking about things that are really more akin to human rights.

In Peggy McIntosh’s 1988 essay “White Privilege: Unpacking the Invisible Knapsack,” which helped originally popularize the term “white privilege,” McIntosh lists some of the everyday “privileges” she experiences as a white person: “I can turn on the television or open to the front page of the paper and see people of my race widely represented…I can go into a music shop and count on finding the music of my race represented, into a supermarket and find the staple foods that fit with my cultural traditions, into a hairdresser’s shop and find someone who can cut my hair...I can be sure that if I need legal or medical help, my race will not work against me.”

For the most part, McIntosh’s list consists of things that every American deserves and every person needs to live a happy, healthy, fulfilling life — that is, rights — but McIntosh refers to them as “privileges.” Calling these sorts of things “privileges” makes it sound like not everyone deserves them. The point of activism like McIntosh’s is to expand access to these necessary benefits, not to take away access from the people who already have them, so it would intuitively make more sense to refer to these benefits as rights, which are universally deserved and should be freely given, rather than privileges, which are not deserved by anyone and must be earned.

Often times, when we talk about “privileges,” we really mean to be talking about a marginalized group’s disadvantages. For instance, a popular tweet from tech entrepreneur William LeGate about the recent Austin bombings, which primarily focuses on people of color, mentions white privilege but is actually discussing minority disadvantages. In his tweet, LeGate writes, "White privilege is when a single dog dying on a plane gets 10x the media coverage of [five] targetted [sic] bombings of minorities in America via domestic terrorist(s).” The main message of this tweet is that minorities are disadvantaged in America because the media seems to care less about their lives than those of animals. Many people who read the tweet were confused, though, because LeGate uses the term “white privilege,” but there were no white people explicitly mentioned in the tweet to have that privilege. One person even jokingly replied, “The dog was white?” This confusion is caused by the fact that LeGate is thinking of a disadvantage but using the word “privilege.” LeGate’s tweet is not an isolated instance, though. In this tweet, as well as in many other instances, it would be clearer to frame the discussion in terms of minority disadvantages or human rights violations rather than privileges.

While calling crucial benefits “privileges” is intuitively contradictory to the aims of liberal activism, doing so fits neatly with the narrative of white supremacists and white nationalists. These groups believe that the white race is under attack and must be violently defended. An example of this narrative in action is the phrase that has been circulating these communities lately, “It’s okay to be white,” which has been recently appearing on fliers at college and university campuses all over the U.S. This phrase shows what these white power groups think their opponents are arguing — “It’s okay to be white” has the underlying implication that someone has said that it’s not okay to be white, since, otherwise, “It’s okay to be white” would not be a worthwhile statement to make. White power groups justify themselves with the idea that liberals hate white people and want to oppress them. When we use the term “white privilege” to describe the human rights currently not granted to people of color, we support this white power narrative because the word “privilege” inherently implies undeservedness.

Having these human rights that we call “privileges” respected by society is a good thing: it’s great that men can walk down a street without feeling afraid; it’s great that white children grow up with access to strong education; it’s great that straight couples can show affection in public without fearing violent repercussions. What’s not great, what liberal activism focuses on, is that marginalized groups do not have access to these same freedoms. We must shape our language to reflect this purpose by calling these benefits “rights” rather than “privileges.”

With widespread systems of oppression still deeply pervasive in the world, liberal activists need widespread support and can’t afford to lose any of that support because of ineffective communication.