TRAPPIST-1 planets could have huge amounts of water 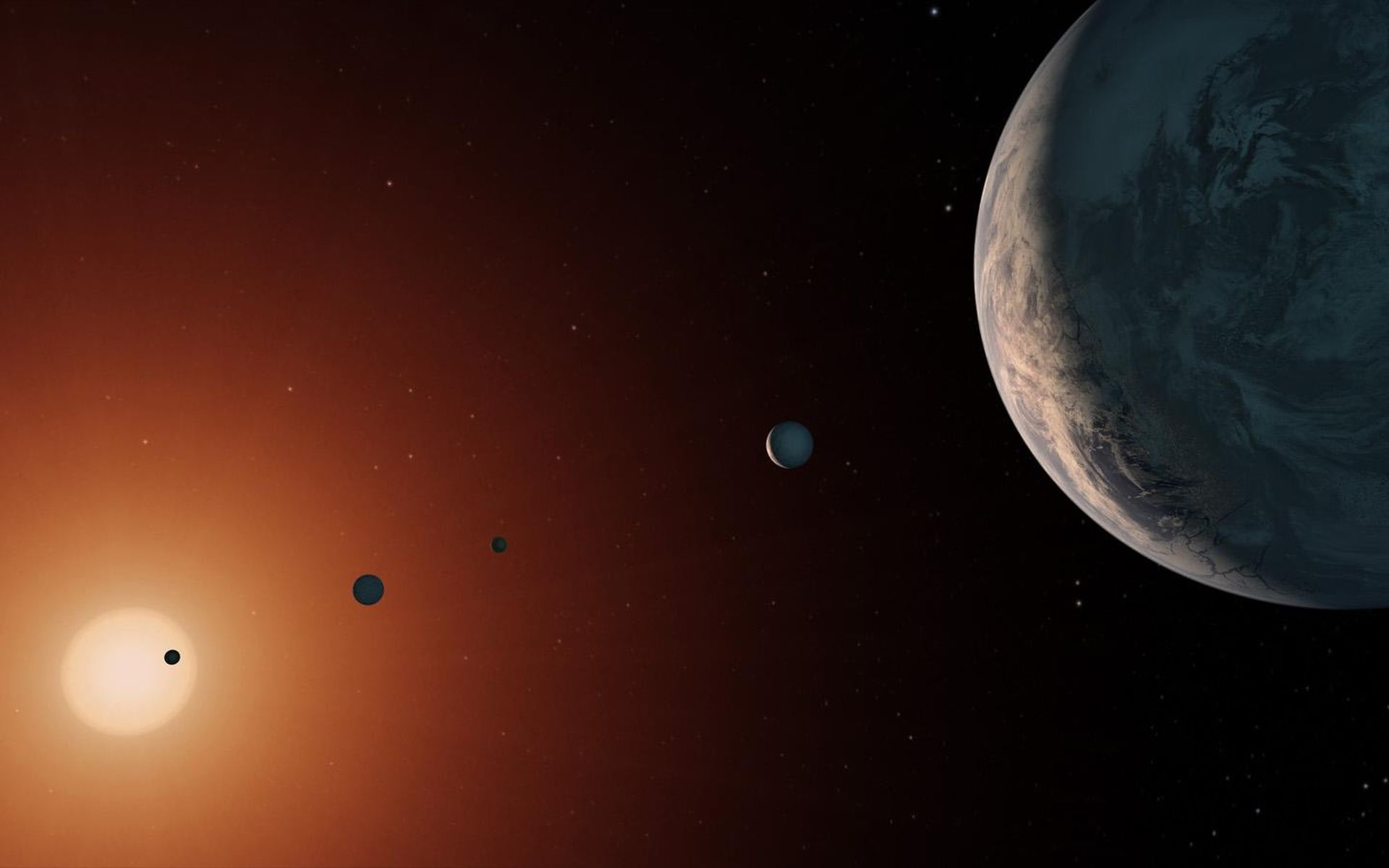 Astronomers believe that some of the Earth-sized planets orbiting the star TRAPPIST-1 may be partially made of water. Though researchers usually point to planets with water as likely places to find life, the TRAPPIST-1 planets may actually have too much water to sustain life — more than 250 times as much water as Earth.

The seven confirmed planets orbiting TRAPPIST-1 have generated excitement since their discovery in 2016 for a number of reasons. They’re the same size as Earth; it’s relatively rare to find planets the same size as ours, and even rarer to find so many in the same place. With seven planets, TRAPPIST-1 is tied in second place for the star with the highest number of confirmed exoplanets. Of the seven planets, three exist in the habitable zone: the band of the solar system that’s the right distance from the star for water be liquid. The habitable zone is also called the Goldilocks zone because it is neither too hot nor too cold.

Astronomers are always on the lookout for planets with water because liquid water is usually considered a prerequisite for the development of life (at least, life as we know it). Liquids are essential to life because they carry dissolved substances, like nutrients, from place to place, both within an organism’s body and throughout an entire ecosystem; the flux of nutrients and minerals is crucial to most biochemical processes.

But why water specifically?

While many planetary scientists speculate that alien life could arise from other liquids, like the lakes of liquid methane on Saturn’s moon Titan, water has special properties that make it stand out among liquids. For one thing, “water is probably the best solvent in the universe,” says Jeffrey Bada, a planetary scientist at the Scripps Institution of Oceanography in California. “Everything is soluble in water to some degree.”
This means that water can carry around a much wider range of dissolved substances than most other liquids.
Water also remains liquid at a very wide range of temperatures: typically, from 32 degrees Fahrenheit to 212 degrees Fahrenheit. However, salt water can remain liquid at temperatures as low as minus 50 degrees Fahrenheit, and with added pressure, at temperatures as high as 650 degrees Fahrenheit (as in the hydrothermal vents at the bottom of the ocean). Water has a high “specific heat,” meaning that a lot of energy is required to raise its temperature. Liquid water’s stability under many different conditions means the systems that depend on it can be more stable: the day-to-day temperature variations of a planet won’t freeze or boil its water away.

The search for water on the TRAPPIST-1 planets began as soon as three of the planets were discovered to be in the habitable zone. But looking for water on planets almost 40 light-years away is incredibly difficult.
A spacecraft would take hundreds of thousands of years to reach the star system, and our current telescopes aren’t powerful enough to detect any information beyond the planets’ approximate sizes.
Astronomers have to use very indirect methods to make educated guesses about what these distant planets are made of.

Astronomers have estimates of the sizes of the planets, based on how much light they block out when they cross in front of their star. Researchers worked from these size estimates to try to figure out the density of the planets, combined with analyses of the planets’ orbits to determine their mass. When the planets pass each other in their orbits around their star, their gravitational fields pull on each other slightly — something that astronomers can observe because it affects the timing of each planet’s orbit. Researchers from the University of Bern simulated the orbits they saw, gravitational pulling included, and used the simulation to estimate the planets’ masses. In this many-step process, the combined mass and size estimates finally allowed them to find reasonable estimates of the planets’ densities. “I worked almost a year on this project until everything worked,” explained University of Bern researcher Simon Grimm.

“We now know more about TRAPPIST-1 than any other planetary system apart from our own,” said Sean Carey, manager of the Spitzer Science Center at Caltech in Pasadena, California. “Improved densities...dramatically refine our understanding of the nature of these mysterious worlds.”

The density estimations suggest that the planets aren’t dense enough to only be made of rock and metal. There must be something else present — and the researchers say that the “something else” is water. For the planets farthest from the star, this could suggest a thick layer of ice covering the planet’s surface. For the planets in the habitable zone, the researchers claim, this means that they have liquid water — possibly even more water than Earth.
According to Cayman Unterborn, an exogeologist at Arizona State University, the planet TRAPPIST-1 might have an ocean of liquid water 200 kilometers deep (200 times deeper than the Mariana Trench) on top of a layer of ice that could be as thick as 2,300 kilometers.

More liquid water doesn’t necessarily mean a higher probability of finding life. The thick shell of ice and water could interfere with geological systems that regulate the planet’s climate, making conditions too unstable for life. In addition, having a surface that’s all water and no land could slow or prevent the circulation of “building blocks” for life, like carbon and phosphorus.

“We typically think having liquid water on a planet as a way to start life, since life, as we know it on Earth, is composed mostly of water and requires it to live,” explains Natalie Hinkel of Vanderbilt University, an author on the most recent density study.

“However, a planet that is a water world, or one that doesn’t have any surface above the water, does not have the important geochemical or elemental cycles that are absolutely necessary for life.”
It’s difficult to know for certain, because “the vast majority of data that’s out there is for one planet, and it’s ours,” says Unterborn. The TRAPPIST-1 system is “such an extreme of rocky planet chemistry.”

Astronomers hope that more precise data about the TRAPPIST-1 planets and their compositions will be available in the near future, once NASA’s James Webb Space Telescope (the most powerful space telescope ever built) launches in 2019. “If these planets have atmospheres, the James Webb Space Telescope will be the key to unlocking their secrets,” said Doug Hudgins, Exoplanet Program Scientist at NASA Headquarters in Washington D.C. More data on the TRAPPIST-1 planets will let astronomers construct more precise estimates of their compositions, and reassess the probability that they might be able to support life.
For now, astronomers and planetary scientists are continuing to refine their educated guesses so that new speculations will be based on more accurate estimates.