RFID - a reliable solution to many widespread problems 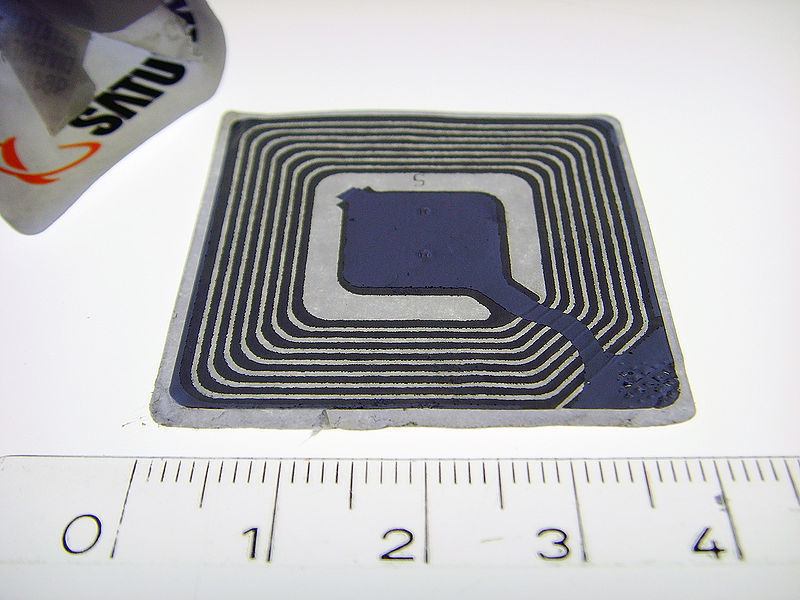 An RFID chip next to a scale. As RFIDs become smaller, they could make some common processes more efficient. (credit: Maschinenjunge via Wikimedia Commons)

What does your debit card have in common with a smartphone, a library book, and an outdoor cat? All of these things are commonly equipped with a technology called Radio Frequency Identification, better known as RFID.

RFID is a short-range technology that uses radio waves to track and identify specially tagged items. Because RFID tags are usually small, light, and flat, they can be attached to almost anything. According to Technovelgy, each tag has a microchip that contains digitally stored data, as well as an antenna that can send or receive radio signals.

According to HowStuffWorks.com, to read the data on a RFID tag, you need an RFID reader. The reader sends out electromagnetic energy in the form of radio waves, which are received by the tag's antenna. The tag responds with its own radio signal, which contains the data stored on its microchip. The reader can then pick up and interpret ("read") the data.

What kind of data do you store on an RFID tag? Some tags, like the anti-shoplifting tags you can find in any retail store, are manufactured with their data built in and permanently fixed, often a unique serial number that can be used to identify an item. On other tags, the stored data is something that needs to be customized, changed, and updated - like the RFID-enabled computer chip in some public transit passes, which keeps track of your balance, deducting the cost of a fare each time you use the card.

Most commonly, because RFID tags are mass-produced and cheap, the stored data is incredibly simple. "Electronic article surveillance tags, which are still used in packaging today, have a 1-bit tag. The bit is either on or off. If someone pays for the item, the bit is turned off, and a person can leave the store," explains Mark Roberti of RFID Journal. "But if the person doesn't pay and tries to walk out of the store, readers at the door detect the tag and sound an alarm."

There are two main types of RFID tags: active tags power their own signals with an internal battery, while passive tags must "harvest" energy from the reader's signal to send a reply. According to RFID manufacturer AB&R, the way the tags interact with the reader determines the kind of RFID system: Active Reader Active Tag (ARAT), Active Reader Passive Tag (ARPT), and Passive Reader Active Tag (PRAT). In both ARAT and ARPT systems, the tag is activated by the reader's signal. Most RFID systems in our everyday lives belong to this category. In PRAT systems, the reader simply acts as a receiver for signals from the active tags; these systems are used to keep tabs on an inventory of large, valuable items that can move around, like a herd of cows.

According to the Smithsonian Museum of Natural History, RFID was originally a military invention, designed to supplement radar. Radar was an essential tool during World War II, but, on a radar screen, you couldn't tell if the planes you saw were your fighters or the enemies. To fix that problem, the British designed a technology they called "Identify Friend or Foe," or IFF: the first RFID system. IFF, installed on fighter planes, sent out radio waves to other aircrafts. If the other planes were friendly, their own IFF devices would respond with a radio signal marking them as allies.

After RFID technology was first declassified and made available for civilian use in the early 1970's, it was mainly used for keeping track of herded cattle. HowStuffWorks.com explains that the "inductively coupled" RFID tags used for this purpose were too large and expensive for a widespread commercial application. When the technology's usefulness became clear, researchers began working constantly to make the technology smaller and cheaper. In the decades that followed, the smaller and more affordable RFID technology became, the more regularly we interacted with it.

Pet identification microchips, automated toll payment (E-ZPass), and "chip-and-PIN" cards are just a few examples of the extremely versatile ways RFID has been implemented in our daily lives. With pet microchips, which can be scanned at animal shelters to identify the owners of lost pets, RFID technology provides a reliable solution to a widespread problem. In the case of E-ZPass, which eliminates congestion by letting you drive through a tollbooth without stopping, RFID functions as an automation tool, streamlining a previously tedious encounter. And on chipped debit and credit cards, which store your payment information not in a magnetic stripe but on a RFID chip, RFID technology not only enables contactless payment but also actively protects your data. The RFID chip, because it's a tiny computer, can have built-in cryptography protection. In this case, RFID is used to revamp an old system, making it elegant and far more secure.

New RFID innovations are still being implemented across the globe. According to AB&R, an area with great potential for RFID tags is the complete replacement of the barcodes found on almost every consumer product. "RFID is similar to barcoding in that data from a tag or label are captured by a device that stores the data in a database," their website explains. "RFID, however, has several advantages over systems that use [barcodes]."

While barcodes need to be manually scanned, with a scanner that needs an unbroken line of sight to read the code, RFID tags are scanned automatically. When you check out a tagged library book, a reader embedded in the security gate scans the book's tag as you exit the library. Many envision a similar system in grocery stores and other retail outlets, where a reader would scan the tags in your cart as you exit — completely eliminating the checkout line.