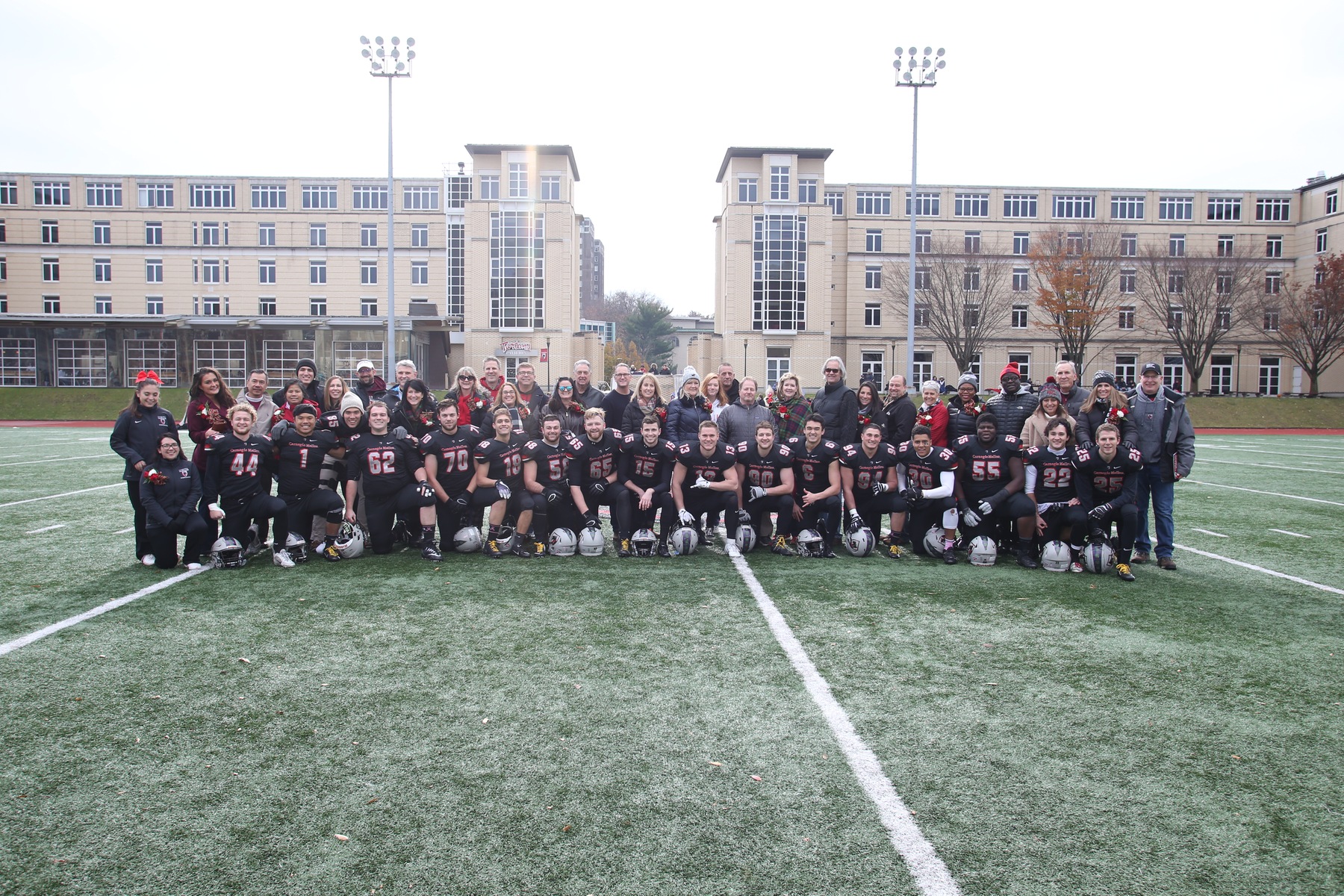 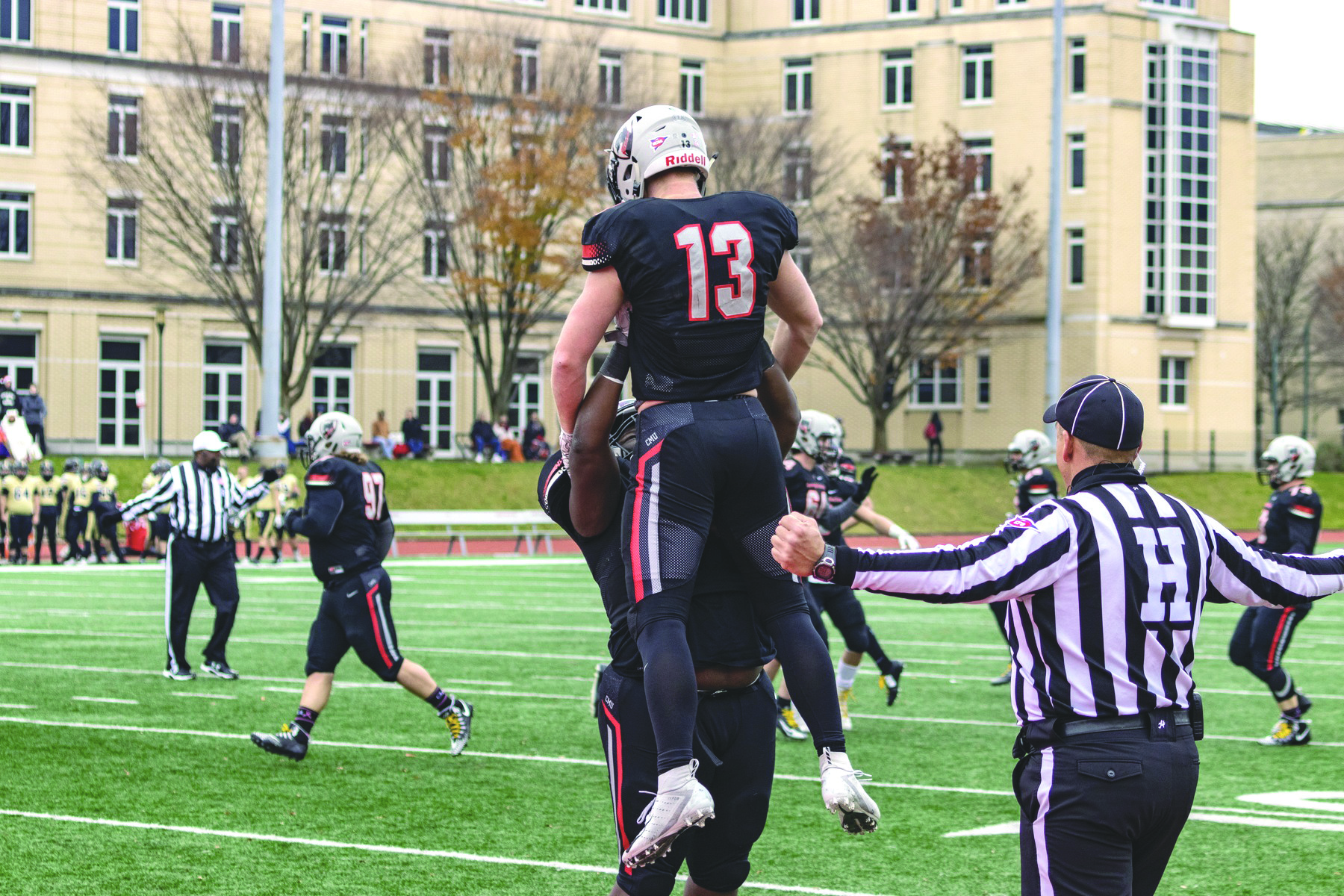 The Carnegie Mellon University football team played its final game of the 2018 season on Saturday, Nov. 17, squaring off against Geneva College in the Go4theGoal Game for Pediatric Cancer. Saturday also marked Senior Day, the final game seniors would play in the Cardinal and Gray uniform. The Tartans scored 28 unanswered points to defeat the Geneva Golden Tornadoes, finishing the season with a 6–4 overall record and a 5–4 record in the Presidents’ Athletic Conference (PAC).

The Tartans started the game with the ball, but their drive stalled on the Geneva 31-yard line. A holding penalty set the offense back at 4th and 13, and senior quarterback Alex Cline threw an interception to give the Golden Tornadoes the ball. But the Tartan defense responded. Senior defensive end Long Tran forced a fumble on The Tartans’ very first offensive play, and senior outside linebacker Quinn Zsido recovered the ball to give possession right back to the Tartan offense.

On the following drive, Cline and the offense marched down the field to the Geneva 17-yard line, converting a fourth down past midfield and spreading the offense around. Cline took a sack for an 11-yard loss to the 38-yard line, but scored on the ensuing play with a 28-yard strike to sophomore wide receiver Alec Oshita in the back right corner of the end zone to get on the board first, 7–0.

On Geneva’s first play of their next drive, they ran 71 yards all the way to the Carnegie Mellon two-yard line. Two plays later, Geneva ran up the middle into the end zone to tie the game, 7–7.

In the second quarter, Geneva took the lead 14–7 after another long run on the first play of the drive, this time for 59 yards. The Tartans responded with a 75-yard drive that finished with a 20-yard touchdown from Cline to Oshita, to tie the game at 14–14.

Geneva’s turnovers continued on the next drive. Junior safety Thomas Polutchko intercepted the ball on Geneva’s first passing attempt of the game, with 6:52 left to play in the first half. The Tartan offense took over on the Geneva 40-yard line, and reclaimed the lead, 21–14, with 5-yard Cline touchdown to senior halfback Karl Kumm.

In the second half, the Tartans continued to score. Cline’s fourth and final touchdown of the game came early in the third quarter. From the Geneva 16-yard line, Cline kept the ball and rushed 14 yards to the two-yard line. He then completed a quick throw to first-yard wide receiver Kris Hughes in the end zone, extending the lead to 28–14.

With 4:34 left in the third quarter, sophomore running back Luke Bikulege scored the Tartans’ only rushing touchdown of the game with 26-yards out. The 35–14 score would stand after a scoreless fourth quarter.

Though the Tartan defense played well in the first half, forcing turnovers and limiting Geneva to two scores, they made adjustments in the second half to stop the Golden Tornadoes’ powerful run game and shutting them out in the second half.

Zsido and Polutchko both recorded 11 tackles each to lead the team. Senior cornerback Ethan Anderson also made an impact with eight tackles, six of them solo, a tackle for a six-yard loss, a forced fumble, and an interception.

Kumm had a career day, with 11 catches for 115 yards and a touchdown. Oshita was one of Cline’s favorite targets, recording five catches for 73 yards and two touchdowns.