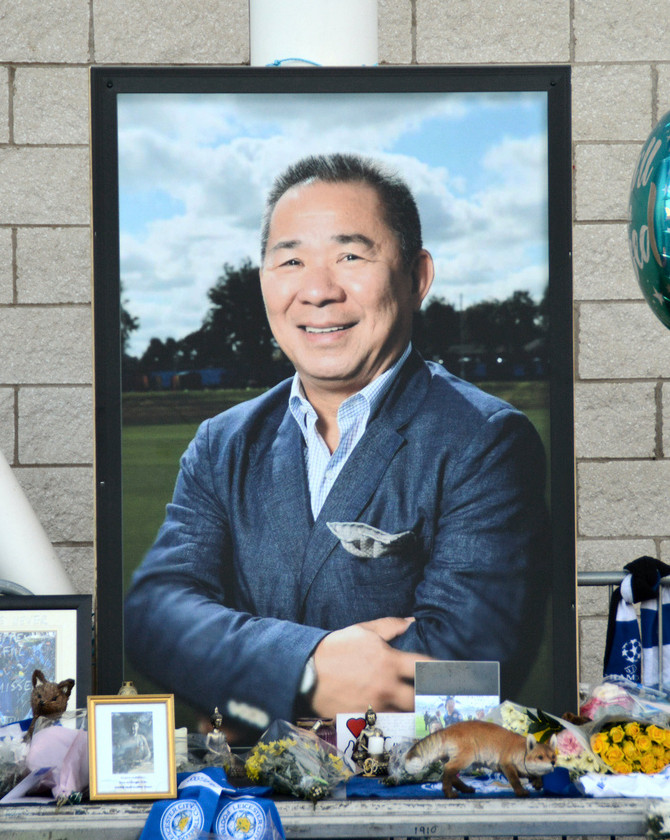 On Oct. 27, the entire soccer world suffered an incredible loss when Thai multi-billionaire Vichai Srivaddhanaprabbha, owner and chairman of Leicester City F.C., was killed in a helicopter crash. The widely adored sixty-year-old had been the chairman of the English Premier League soccer club since the company King Power, of which he was founder and CEO, purchased the club back in 2010.

At that time, Leicester City had just been relegated to play the 2008-09 season in the third tier of English soccer, having never played below the second tier before that. Their meteoric rise to fame and success in the years that followed has been largely credited to the impetus given by Vichai’s new ownership. His death, and those of three others in the helicopter, came as he left the club’s stadium after a game a few weeks ago, and the entire city of Leicester mourned with the rest of the soccer world.

Six years after slogging it in the third tier of English soccer, Leicester made it to the Premier League in 2014, reaching England’s top flight of soccer. With only nine of the 38 games left to play, and only four wins of the previous 29 games, Leicester sat at the bottom of the table, seemingly destined for relegation, ending their short spell in this elite tier. An unforeseeable turnaround saw them win eight of the last nine games and thus maintain their position in the league, but the celebrations were cut short when the manager, who’d garnered heroic status with the fans, decided to quit his job that summer.

The next season, to most Premier League viewers’ surprise, took off fairly well for the Foxes (as they are nicknamed), with players Riyadh Mahrez, N’golo Kante, and especially forward Jamie Vardy exploding onto the scene as top-class players. New manager Claudio Ranieri found a real rhythm, and Leicester City found themselves in the fifth position, having lost only one game 10 games into the season. Though unexpected it wasn’t uncommon for a weaker team to start well like this in the Premier League, and all expected and awaited the eventual dip in form. As the season progressed, Leicester City became the fairytale heroes, somehow managing to maintain this form and fight for a place in the top two.

The world was rooting for this underdog team. They were given a 5000/1 outside odds of winning the title, lower than each of the other 19 clubs, yet they were flying high. In May 2016, Chelsea scored an equalizing goal against Tottenham Hotspur, determining that no club could mathematically reach Leicester’s points tally in the remaining three games, crowning them champions. It was a celebration of the sheer impossible becoming true. Leicester City gave the world a story of hope, that the underdog team could overcome the traditional top teams like Manchester United or Arsenal. It was a miraculous win showcasing the true unpredictability of sport.

Years prior at Vichai’s inauguration as chairman he stated he would make Leicester a top-five club, to much disbelief from both Leicester City fans themselves and the soccer world. In being an integral part of achieving this dream, he became more than just any other chairman to the fans. In just eight years, he had embedded himself into the city, where the millions he poured into the football club were matched by his philanthropic efforts, donating millions to various local charities, social development programs, and the local hospital to aid improvements to a city that he embraced.

A man remembered by many as being the one behind the counters at the stadium serving free doughnuts and beer to the fans, he truly became a man of the people succeeded in creating something magical for. For Leicester fans, it was the little things that made Vichai the face of generosity and benevolence, it is what uplifted the entire sports community and had everyone celebrating with him and his club in their successes.

His untimely departure is tragic, but his legacy has already taken shape; Leicester City announced he will be honored with a statue outside the stadium. In the days after the accident, fans placed flowers and jerseys and personal mementos outside the stadium in remembrance. In the new age of sports dominated by solely monetary goals and functions, Vichai brought something personal to the pitch. In this moment of shock and sadness Leicester City fans remember the happiness and hope that was brought to the sporting community by a man, his club, and his endeavor.