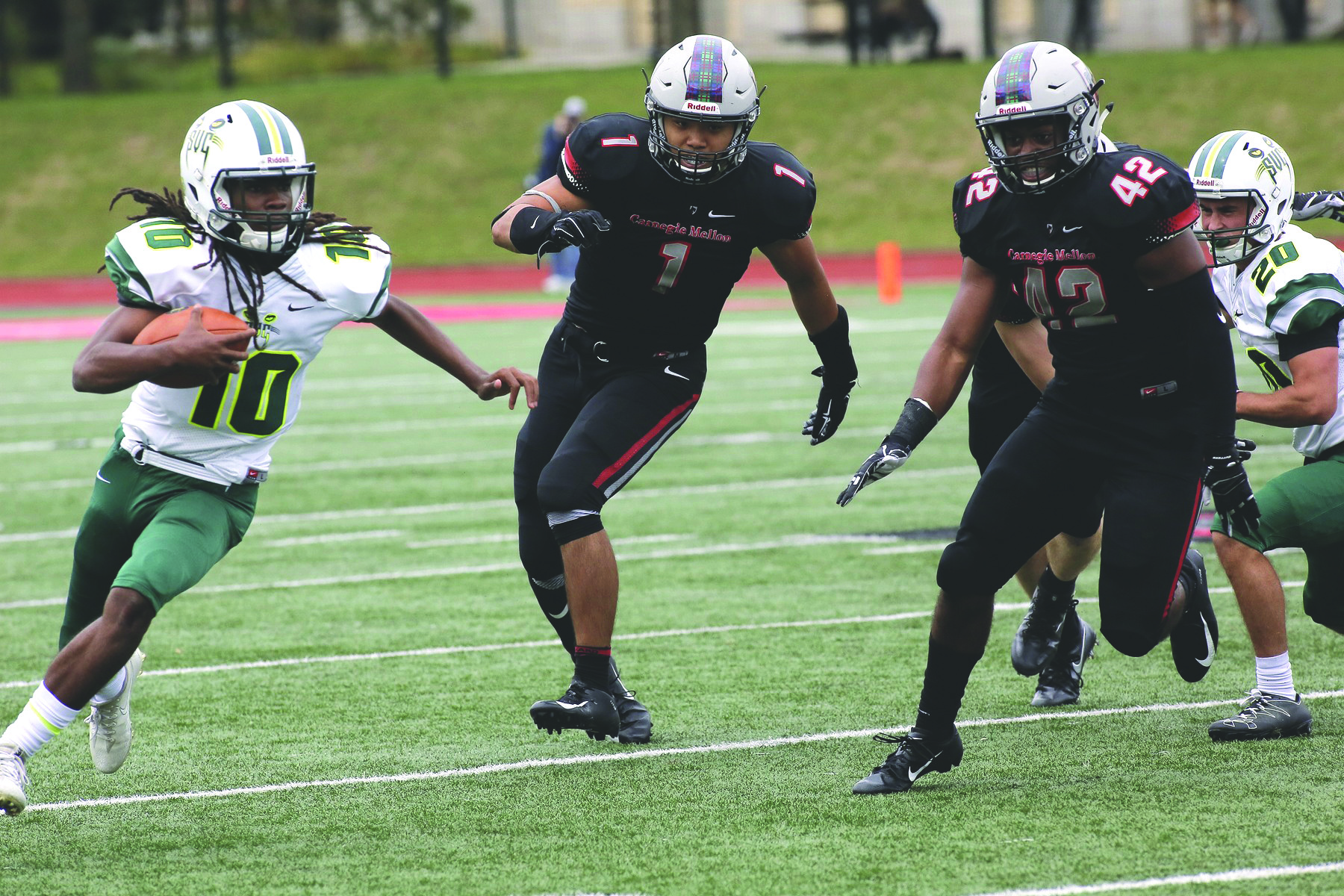 It’s the second quarter. Defensive end Long Tran checks into the game. The opposing quarterback scrambles to the right, with Tran in pursuit. He pushes the quarterback into the sideline, causing an interception. Tran’s teammates cheer him on at the end of the play.

That was two years ago, in a game against Washington University in St. Louis, when Tran was a sophomore. After spending most of his first year at Carnegie Mellon in the weight room and studying film, it was the moment when he felt he had graduated from high school football to college football. Tran, now a senior mechanical and biomedical engineering major, is a leader on the Tartan football team. Earlier this season, his career day versus Saint Vincent — finishing with three sacks for a loss of 23 yards and eight tackles, three solo — earned him University Athletic Association (UAA) honors for Defensive Player of the Week.

Tran started playing football in grade school and is now in his 13th year. From his first game, he was hooked. He hasn’t stopped playing since.

“I really enjoyed the game the first time I put pads on,” Tran said in an interview with The Tartan. “It was really a great experience because at that time, I’d never had any exposure to teams and goal-oriented stuff. It was really fun, getting to bond with other people and make friends in a unique way.”

Fast-forward a decade, and Tran was making decisions about his college future. Carnegie Mellon came calling, and he found a perfect fit. He had the chance to play collegiate-level football, as well as a great opportunity to pursue engineering, which he knew he wanted to do. But like any student athlete, balancing both academics and athletic responsibilities was a challenge for Tran, and something he has learned to do throughout his time at Carnegie Mellon.

“It’s definitely had its ups and downs. I try to prioritize: ‘Do I have energy enough to get the film study done? I know I have a test tomorrow, so how can I proportion [it] out?’” Tran said. “I definitely think I’ve improved, time management wise. I know when to push my limits…but I also know my peak limit. The athletic mindset really helps that. You just try to get the job done in whatever way you can.”

One of Tran’s biggest challenges came in his junior year. After fully participating in workouts the summer before the season, a heartbeat reading showed that Tran had an irregular heartbeat. He was soon diagnosed with premature ventricular contractions (PVCs) — extra heartbeats that disrupt regular heart rhythm. While PVCs are common and often cause few symptoms, further tests revealed that Tran had PVCs at an especially high rate and that his cardiac output was abnormally low. He underwent a cardiac ablation procedure, which sidelined lined him for the entire 2017 season.

“That was really one of the rougher periods,” he said. “That was a roller coaster ride of a semester. Luckily, I got through it, I recovered very well, and I’m back on the field this year. Luckily, I had a great group of guys and coaches that helped me get through that.”

Off the field, Tran is president of Plaidvocates, a studentathlete-run organization that focuses on being a peerto-peer support team, helping fellow student athletes balance academic and athletic life. Every team at Carnegie Mellon has representatives from Plaidvocates; Tran is one for the football team in addition to being president of the organization.

“I definitely appreciate the people who helped me and spoke to me and took time out of their day to get me through what I dealt with last [year], and to see that reciprocated through this organization really is something I’m really proud of,” he said.

Alongside his mechanical and biomedical engineering coursework, Tran has also done research for various professors and labs on campus. Currently, he is working on a modular snake medical robot for his CIT Honors Research. Its purpose is to be used during surgical procedures in minimally invasive ways. With the robotics component, the snake can access the vessels in the body through a less invasive hole.

Looking to the future beyond his senior year, Tran is interested in pursuing an integrated master’s degree from the mechanical engineering department, though he is also open to working in the surgical robotics field. Because he took a medical redshirt year to recover from his heart condition, Tran has one year of athletic eligibility left to play football at Carnegie Mellon. Football has been part of his life for so long, and the integrated master’s program is an opportunity to play football for one final year.

“I think my favorite thing about the football is just the competitiveness,” Tran said. “I’m a highly competitive person. On the field, it’s a very competitive mindset. I try to pump up the guys every time before the first snap of the game. We’re out here for one job, one job only, and that’s to win. We’ll get it done. It’s a source of pride.”

With the final game of the season against Geneva this Saturday, Nov. 17, Tran looks to go out with a win.