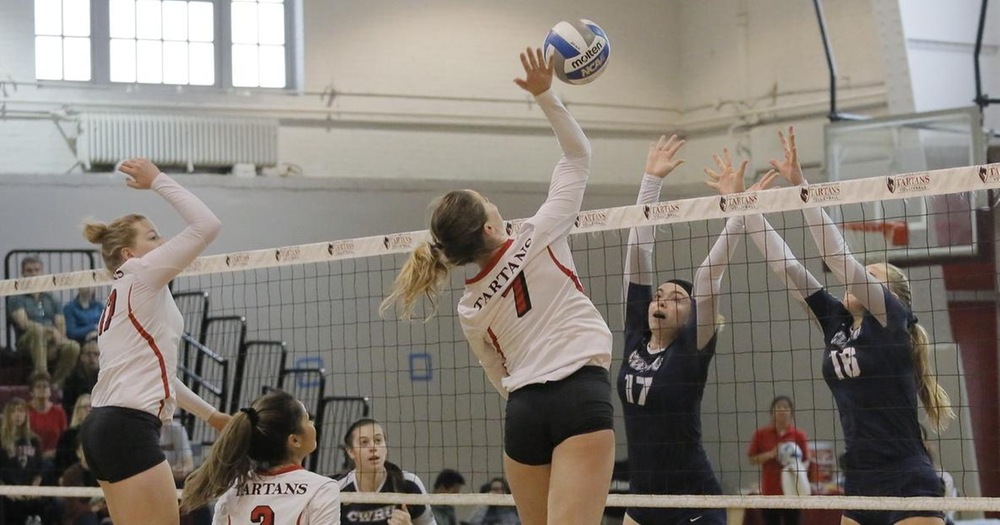 In their last three games before the University Athletic Association (UAA) conference tournament begins next weekend, the Tartan’s women volleyball team went 2–0. The final game was cancelled by the university in response to the shooting at the Tree of Life synagogue. Each of the first two matches went on as planned, with the Tartans taking on 19th-ranked Ithaca College on Friday and unranked Brockport on Saturday. The Tartans defeated Ithaca three sets to one, 25–16, 20–25, 25–22, and 25-15 and breezed past Brockport in straight sets, 25–19, 25–14, and 25–18.

The Friday night match against Ithaca moved the Tartan’s record for the year to 20–6, but the matchup resulted in a Tartan win thanks to various mistakes by Ithaca. Kills, attacks, assists, digs, blocks, and other non-error counting statistics for each team were just about the same, but the error statistics — hit errors and receiving errors — gave the Tartans the advantage in the match.

Strong individual performances from junior Maia So-Holloway and senior Lauren Mueller helped carry the Tartans to victory. So-Holloway had 41 of the team’s total 48 assists while Mueller recorded 14 kills to lead the team.

The Tartans dropped the second set to Ithaca, the first set that has ended with a losing decision in three matches. The Tartans have been on a roll recently, and they were able to continue their streak of domination against Brockport.

An early Saturday start time left Brockport struggling on the court, while the Tartans continued their strong play. A running theme of Tartan dominance from regimented production was evident in the weekend, as the same statistical phenomenon of capitalizing on opponent errors that appeared against Ithaca reappeared against Brockport.

So-Holloway again lead the team in assists with 28 of the total 34 for the Tartans. Senior Sarah Jurgens lead the team in kills with 11, but junior Erika Foose stood out with six kills on 11 attempts and no errors. This hot streak is a great sign for the Tartans going forward. They are performing well as the season winds down, so signs are pointing towards a strong performance in the playoffs.

With these two wins over the weekend, the Tartans have won four straight matches. Next up for the Tartans is the first round of the UAA conference tournament. They take on rivals Case Western Reserve University next weekend in Rochester, NY at 2 p.m. on Nov. 2 in the quarterfinals.