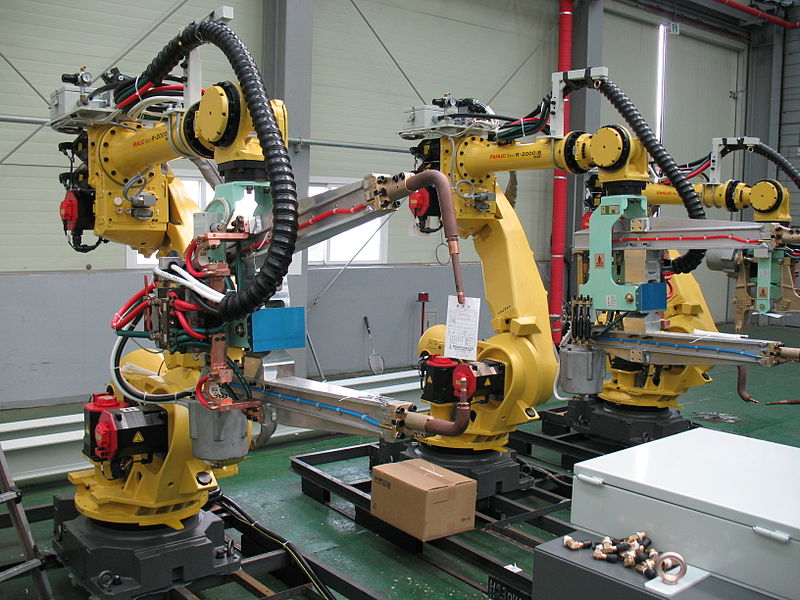 Industrial robots like this one are used in manufacturing to increase efficiency and yield. A joint study from the Department of Economics at Uppsala University and the London School of Economics has found that using industrial robots may actually increase wages for humans. (credit: Mixabest via Wikimedia Commons)

Tech experts have done a great job of warning us about the potential dangers of AI and automation — nowadays, you can’t even buy a Roomba without the fear of it becoming sentient and taking over the world.

While pundits and industry figures predict that the continued advances in robotics will lead to an increasingly impersonal and jobless future, the reality is quite different. According to a study called “Robots at Work,” industrial robots increase both wages and productivity.

The study, a collaborative effort between George Graetz, a researcher at the Department of Economics at Uppsala University, and Guy Michaels, a researcher at the London School of Economics, is based on statistics from 17 different countries, looking at their incorporation of industrial robotics over the span of 14 years from 1993 to 2017. The results show that job opportunities and wages increased across the board, and the Gross National Product (GNP) of these countries increased by 0.37 percent while labor productivity increased by 0.36 percent. Out of the 17 countries studied, Germany, Italy, and Denmark saw the greatest increases.

Robots exceed humans in a lot of ways when it comes to labor: they never tire, they don’t unionize and demand wage increases (at least, not yet), and they can do a lot of heavy lifting thanks to hydraulics, pneumatics, and other systems. With more robots on hand, companies can produce more of a given product, which in turn leads to increased profits.

History has shown us that when technological advancement combines with human ingenuity, the results are extraordinary. The automobile industry is a great example: by combining robotic workers with assembly lines, you gain the ability to produce a greater number of vehicles at higher quality in a significantly shorter amount of time, as compared to human workers alone.

It’s important to realize, however, that just because this robot-human symbiosis exists now doesn’t mean it will remain this way in the distant future. Futurists like Martin Ford have long speculated about the economic impact of robots, and it is conceivable that robotic workers will one day displace human employees, not only in the lower-skilled labor-oriented jobs but also in areas that demand higher levels of cognition and creativity, such as art or music.

Whether or not this evolution of the human-robot dynamic is ethical is a debate that rages on amongst ethicists and citizens alike, with no clear consensus in sight. Similarly, whether the day will come when humans are overtaken completely by machines is something only time will tell. So, for now, we should continue to enjoy the benefits of our robotic workers and companions, as they have objectively improved the quality of our lives manyfold. Nevertheless, we should not lose sight of what the future may bring and be ever prepared to address a deadly machine uprising.