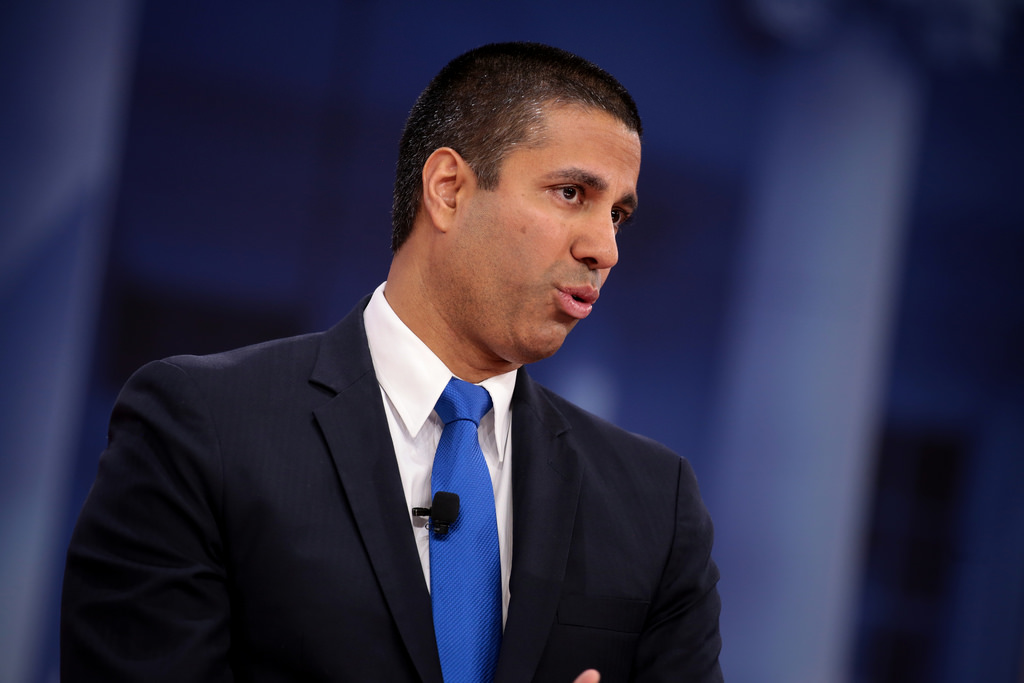 Federal Communications Commission chair Ajit Pai opposes net netruality. “Let the free market for wireless services and devices flourish,” he said, asserting that “If the government gets out of the way, the wireless marketplace will continue to be an American success story.” (credit: Courtesy of Gage Skidmore via Flickr)

On Aug. 31, the California state legislature passed Senate Bill 822, which creates regulations to preserve free and equal access to the internet. On Sept. 30, Governor Jerry Brown signed the bill into law.

Mere hours later, the U.S. Department of Justice filed a suit with the state of California, claiming that the bill attempted to impose regulations outside the state's jurisdiction. On Oct. 3, telecommunications industry groups — The American Cable Association, the Cellular Telecommunications Industry Association (a group representing the wireless industry), the National Cable Television Association, and USTelecom (representing the broadband association) — jointly filed their own suit in California's federal district court.

“Under the Constitution, states do not regulate interstate commerce — the federal government does," said U.S. Attorney General Jeff Sessions in a statement. The telecommunications groups back up the federal stance: “As the Federal Communications Commission (FCC) has repeatedly recognized, due to the inherently interstate nature of Internet service, it is impossible or impracticable for an Internet service provider... to distinguish traffic that moves only within California from traffic that crosses state borders.”

Supporters of the law argue that it institutes basic consumer protection for residents of California. "Big telecom companies hate the California net neutrality bill because it prevents them from screwing over their customers more than they already do,” said Evan Greer, deputy director of activist group Fight for the Future, in a statement.

In Dec. 2017, the FCC's five commissioners voted 3-2 to repeal the federal net neutrality protections that had been in place since 2015. The rules prohibited various practices considered unfair — charging more for faster internet service, for instance, or charging different prices for visiting different sites — and the vote to repeal them was widely decried by consumers, legislators, and advocacy groups. "This decision puts the Federal Communications Commission on the wrong side of history, the wrong side of the law, and the wrong side of the American public," wrote Commissioner Jessica Rosenworcel, one of the two who voted against the measure, in her dissent.

California is not the first state to enact its own net neutrality rules — nine other states have taken action either through legislation or gubernatorial executive order — but, as the U.S.'s most populous state and home to the headquarters of many leaders in the tech industry, a net neutrality victory could set a precedent for standards in other states.

The net neutrality provisions in SB 822 are also some of the nation's strictest. The bill largely mirrors the recently abolished federal protections, but enhances them by banning the use of "zero-rating" by internet providers to restrict access to services other than their own — for example, allowing users to view the provider's own video streaming service for free, but charging for viewing Netflix, Hulu, and other external streaming services.

“The fight for social change and progressive values is directly tied to a free and open internet,” said Assemblyman Miguel Santiago (D-Los Angeles) to the LA Times after the bill was signed. “This measure ensures that we, in California, will maintain a free and open internet that doesn’t discriminate or price users or content differently.” Santiago, who initially attempted to scale back SB 822 but faced pressured from his constituents, is a co-author of the final bill.

Industry groups claim the law will not protect consumers and will achieve nothing but wasting the time of internet service providers and the government as they work to ensure compliance.

"Once again the California legislature has enacted an extreme and illegal state law attempting to frustrate federal policy," said Sessions. "The Justice Department should not have to spend valuable time and resources to file this suit today, but we have a duty to defend the prerogatives of the federal government and protect our Constitutional order. We will do so with vigor. We are confident that we will prevail in this case — because the facts are on our side.”

California lawmakers, however, are prepared to hold their own. "Unlike [Chairman Ajit] Pai's FCC, California isn't run by the big telecom and cable companies," said California State Senator Scott Wiener, original author of SB 822. "Pai can take whatever potshots at California he wants. The reality is that California is the world's innovation capital, and unlike the crony capitalism promoted by the Trump administration, California understands exactly what it takes to foster an open innovation economy with a level playing field."