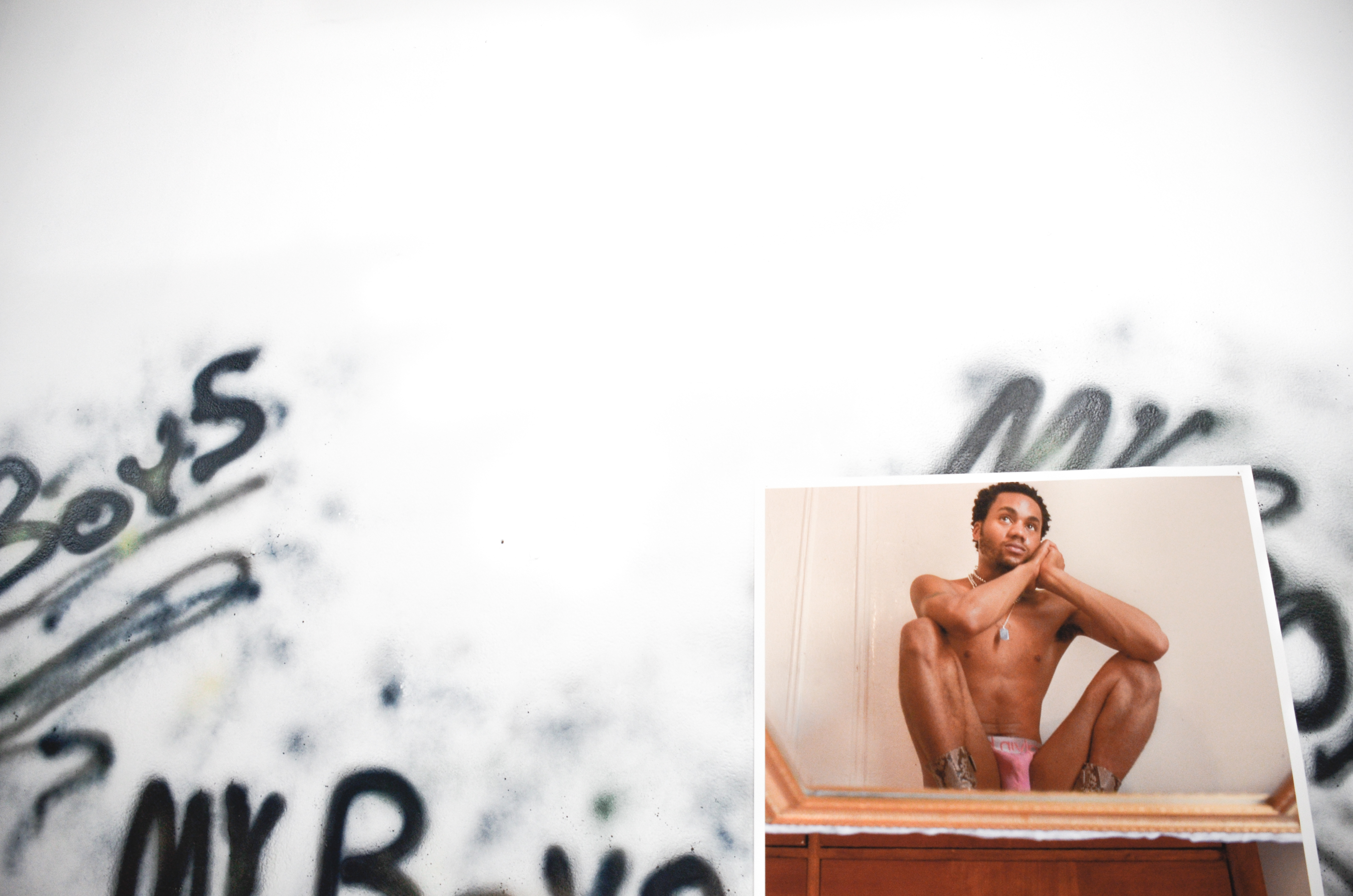 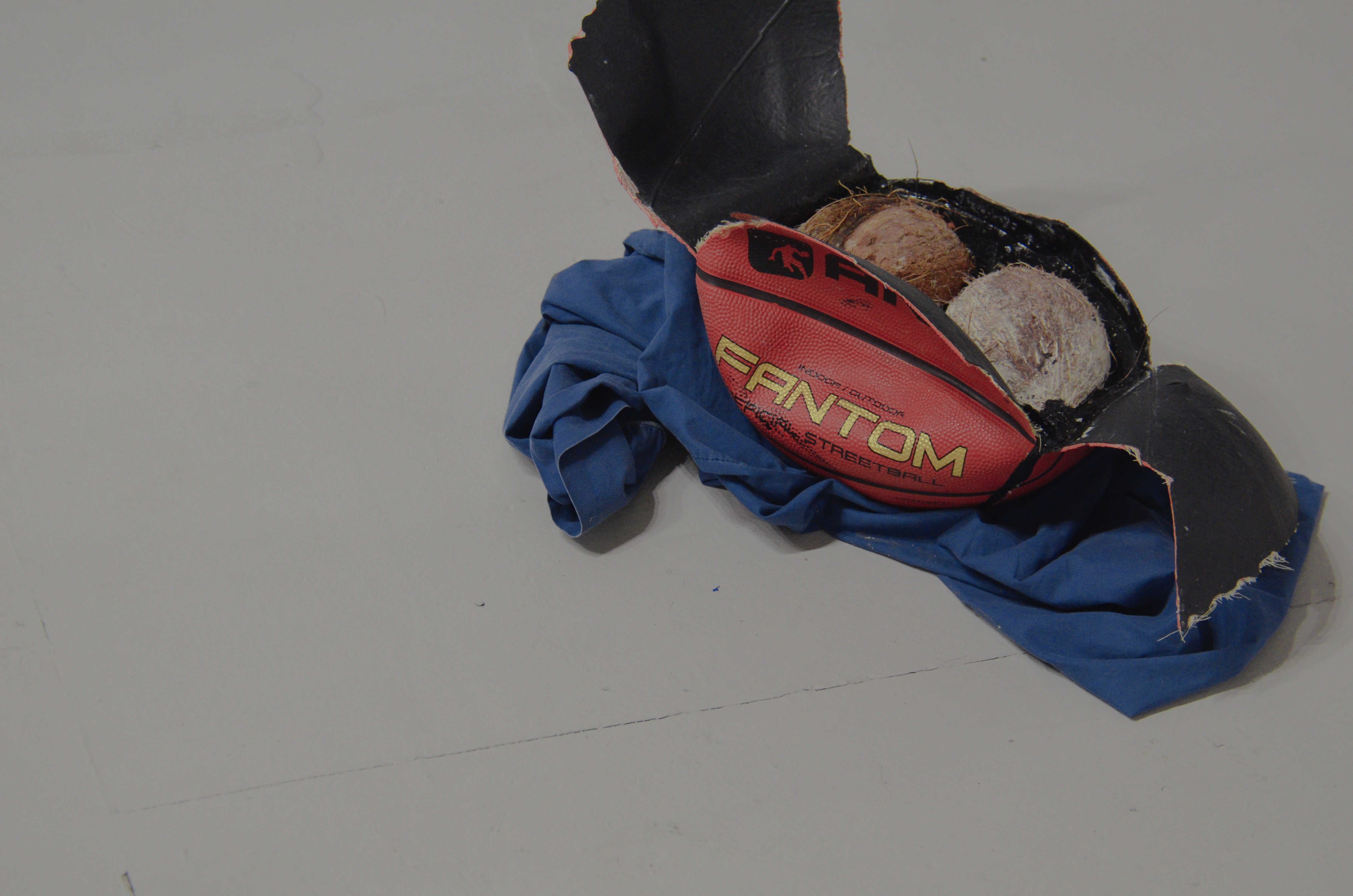 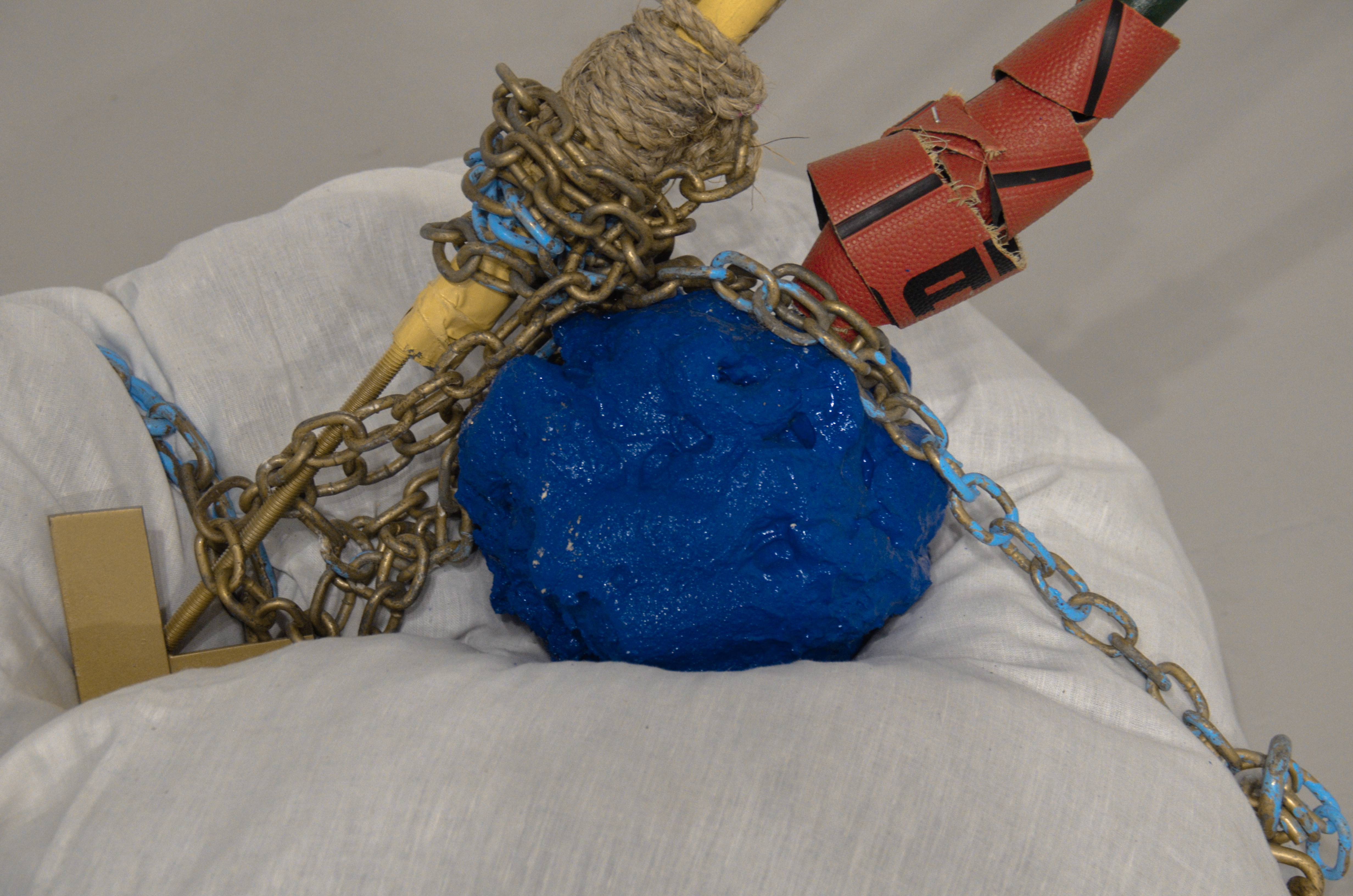 Greeted by pulsing music and the proclamation of a “black multimedia space,” I immediately felt the gallery buzzing with energy around the brightly colored portraits of young, black, gender non-conforming males and color-blocked sculptures constructed from found materials. “My Boys” is spray painted along the wall of portraits, functioning as a sort of shrine to the young men portrayed in the softly lit, rosy photographs. Trash bags, nets, and a very specific shade of blue break up the white and grey of the Future Tenant. Welcome Home, which opened last Friday and was curated by Sean Beauford, featuring the work of Carnegie Mellon art student Kasem Kydd and artist Brendon Hawkins, is a vivid celebration of youth, community, and identity.

Hawkins is a photographer and artist who recently moved back to Pittsburgh from New York, and this is his first exhibition. Bouncing and dancing around the gallery, he projects exuberance and sincerity, qualities reflected in his work. “My BOYS” is a series of work capturing his community of black queer men. At first glance, the portraits have a feel that is somewhere in-between editorial photography and pop art; the rosy background and the soft artificial light interact with the blocks of color to create this effect. However, the millennial editorial style of photography transcends fashion or aesthetic genres in the relationship between subject and photographer. Each portrait is titled by the name of the subject. The gazes of these men are soft. These portraits then become incredibly intimate, relationships which became clear in my conversation with Hawkins. He talks of having personal relationships with each of the subjects — whether it is the 19-year-old who he affectionately refers to as “his son” or an ex whose shared history became part of the photo.

Hawkins describes the goal of this photo series and his upcoming project “SOFT MASC” as a way of using images to complicate the archetypes expected for gay males. Traditionally, he explains, you’ll see depictions of gay black men as hyper-sexual, hyper-masculine, or hyper-feminine. There’s not a lot of nuance or diversity of identity in representation, and that’s what he would like to work against in his photography.

This is where that intimacy in portraiture becomes key. We write interesting stories and break down societal caricatures when we can paint individuals as people, as complex and cherished as we see each other in real life. “I shoot them so I don’t have to date them,” Hawkins says. He talks about how gay culture can be so sexual, that it’s hard to reach that level of deep relationship without the expectation for physical relationships as well. The camera lifts that pressure to give way to honesty and vulnerability. But make no mistake; although these portraits come from a place of deep social awareness, they are shot and presented for the purpose of celebration. And it is this dichotomy that plays towards the subversiveness of Hawkins’ work, through the exultation of a community presented without overt reference to “otherness.”

History and personal narrative are what tie Hawkins’ work to Kydd’s, but woven through sculptures and installations are the stories of displacement and diaspora rather than queerness. In the past, Kydd has worked towards art that reflects on the black body and spirit in a white society. In this show, his work tells his own story. The work is not only about generations of men in his family from the West Indies, but also about his personal history tied to New York and Pittsburgh. It wrestles with the question of what place defines the self, which intrinsically is tied to a question of home.

Materials in this work have almost become a shrine to the experience of feeling foreign or out-of-place in society. It tells a story of history that doesn’t fit a clear timeline or a narrative, but creates a portrait of a person — it’s about routine, family, and loss. The relationship of art to history is always interesting because on one hand, we understand humanity through the sequence of complicated, messy events. But art often is about the individual and the effort of building home or security in the midst of all of the broader commotion.

The history of colonialism, slavery, and oppression are evoked through these installations. “My Father Was A Soccer Player, And Built Boats By Hand,” for instance, tells a story of his father’s life as a way of understanding his place in the world. Each piece is paired with a story that paints a large picture of, perhaps more than where he came from, who Kydd is. The installation “Mourning Cricket” and video piece “Whaler Out of Water” pull music from artist Alston Becket, who was a cultural icon in the West Indies in political and social movements.

Both pieces play with superstitions and symbols — the first alludes to his relationship with his mother and to a symbol of mourning. The second refers to the ideas of industry and superstition in the whale symbolism as livelihood and survival in the literal sense. An allusion perhaps also to Moby Dick, the whale is used as a symbol of cultural erasure and white supremacy; paired with Horn Fuh Dem by Beckett, it generates a history of chasing change and progress.

The harpoon, the basketball jersey, and the soccer nets all work together and give us a strange mix of celebration of history with something that’s almost like grief. Kydd says that the art was made for himself — playing with speed of processes, and understanding his own history as there isn’t a strong West Indian community he can align himself with in Pittsburgh. It’s about finding personal direction in the past, and that tension with the allegories of race and foreignness makes it an impactful coming-of-age story.

Before Welcome Home, Kydd and Hawkins had not worked together. Curator Sean Beauford brought these two artists together to create this celebration and reflection of black youth. These artists’ works are both about displacement and love for community, and how we build our own when society has not given us a proper place or identity to call home. It’s hard to put language to ideas of “Self” when the dominant society has done its best to erase you. Humans are drawn to people like ourselves — we look for familiarity in ourselves and others. To create art that can be about the individual and the quotidian, and to allow it to become relevant to the universal experience, is not always afforded to people of color and LGBTQ folk. Activism comes in many forms, and sometimes it’s a celebration that transforms and transcends. Stepping into a space that does not reduce the complexity of identity or take away the tenderness and specificity of the personal was powerful. As a viewer, it was an honor to be allowed into the moments and the people that have come to shape who these artists are today because, as corny as it may sound, we find home in our art as we find home in each other.