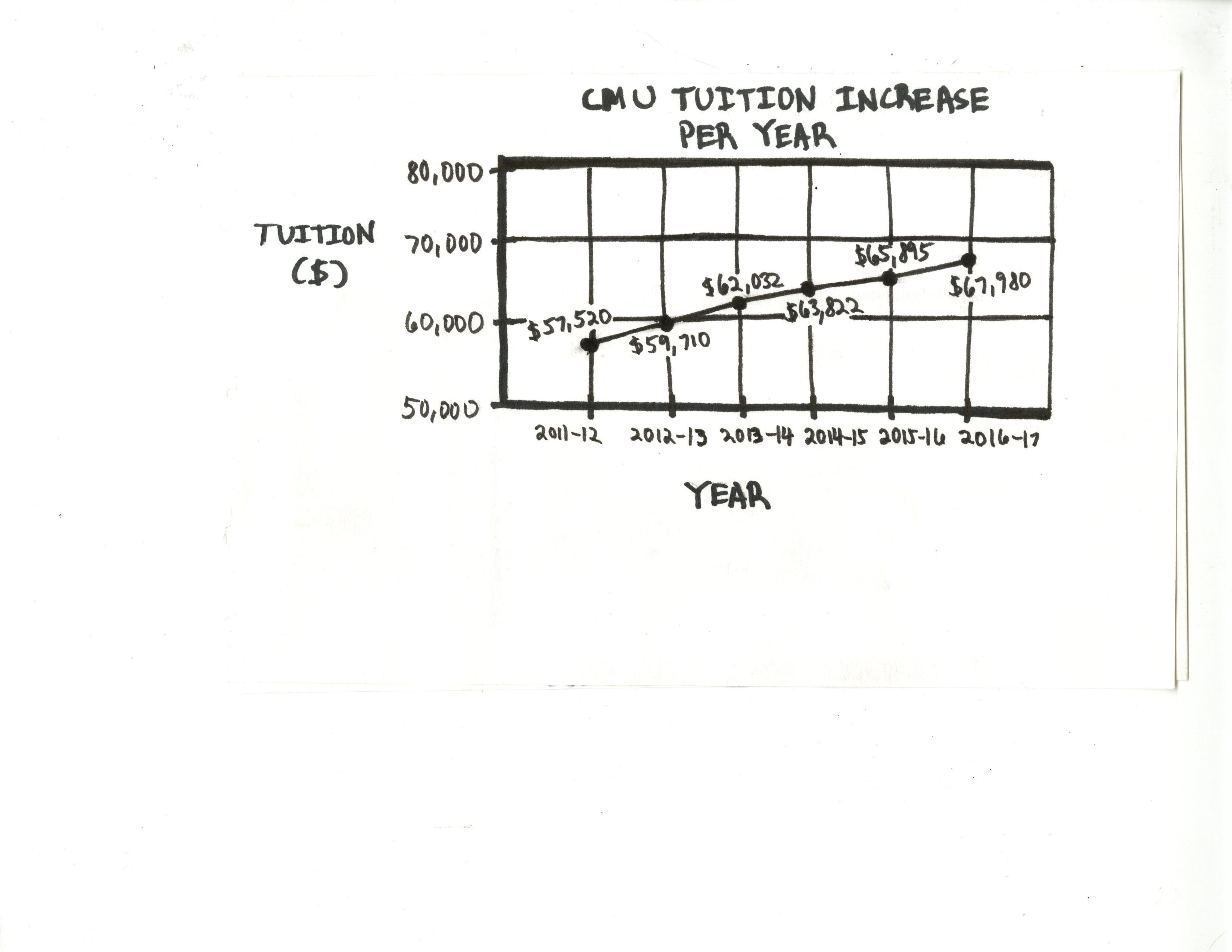 Earlier this year, Provost Farnam Jahanian announced a three percent increase in undergraduate tuition. This now puts the annual cost of attending Carnegie Mellon, excluding room, board, and other fees, at $52,732, which Business Insider ranks in the top 30 most expensive universities in the country.

Carnegie Mellon tuition has risen nearly every year for the past five years. These rising costs, along with the lack of transparency on behalf of the administration, have called students to question how the funds are being allocated. The Tartan reached out to Provost Jahanian for a response to this.

“We appreciate that the rising costs of higher education represent a significant sacrifice for our students and their families, which is why we make every effort to keep any increase in Carnegie Mellon’s tuition as low as possible,” said Jahanian. “To that end, over the past several years we have observed that [Carnegie Mellon University’s] rate of increases in the full tuition figure has been consistently below those of our peer institutions, typically by about 0.5-1 percentage point each year.”

While perhaps Carnegie Mellon does not raise costs as steeply as fellow universities, students have noticed that their financial aid packages have not increased in proportion to tuition. Students with higher needs also notice that their aid packages cover a smaller percentage of tuition from year to year. Though financial aid is very case-specific, some of the decrease could also be due to expectations for students to work and contribute to their tuition. David Stone, a junior majoring in business administration, observed he “had to take more loans this year than last,” but that decreasing financial aid really comes as “no surprise.”

Provost Jahanian states: “The University remains focused on increasing the amount of money available for financial aid. One of President Suresh’s top priorities has been to provide critical financial support to outstanding undergraduate and graduate students. Since [Fiscal Year 2013], he has dedicated or raised $170 million for presidential fellowships and scholarships, including $60 million in new gifts. In a message to the university community last fall, President Suresh indicated that he expected more than $100 million to be added to the fund.” Despite these advances, Karishma Manglani, a junior majoring in decision science, counters that these scholarships are only targeting “high-performing students and completely ignore the problem that low-income students have a very hard and isolating time here.” Thus, if low-income students have always struggled to perform well or seek appropriate resources in high school, a systematic barrier further dismays them.

Rising tuition has also led the student body to demand more transparency in fund allocation. Transparency has become a recurring theme in most student body elections where students are starting to feel their cost of attendance is perhaps not yielding the necessary returns. Provost Jahanian states, “Tuition also supports the expansion of undergraduate education initiatives, and the improvement of facilities and various services to help students succeed and thrive at [Carnegie Mellon].” Vice President of Finance Angela Blanton says that tuition functions as a form of “fungible income” and contributes to many new developments on campus. For example, the Tepper Quadrangle has received one third of its funding from university funds.

From an infrastructure perspective, tuition partially subsidizes, in no priority order, a staff and facilities expansion at the Counseling and Psychological Services (CaPS), an increase in the child care facility for further support to faculty, a recommitment of pipeline programs like the Summer Academy for Math and Science, upkeep and renovation of classrooms including the new developments of Tepper Quadrangle, Hamburg Hall, Ansys Hall, and Scott Hall, and the strengthening of the “One CMU” community. As mentioned in President Suresh’s Annual Update, the “One CMU” community includes new makerspaces, athletic facilities, renovation of Sorrells library, and expansion of the Cohon Center.

However, the problem still remains for the student body. Much of the Carnegie Mellon student population is unaware of the allocation breakdown, while others believe tuition is not contributing to the “right” things. One junior argues that on-campus housing is not covered by tuition, which proves a problem especially to the overcrowding of freshman dorms and the necessary renovations for older apartments. Manglani also disapproves of the existing allocation because of the underrepresentation of certain concentrations at Carnegie Mellon. She furthers, “If I’m a Dietrich student, use my money to fund Dietrich. Fund the Humanities, and make [Carnegie Mellon] a leader not only in Arts and Technology, but in the Humanities as well. The focus of this University seems to be on building even more STEM related infrastructure.”

Apprehension also surrounds the administration’s form of communication to the student body. Bharadwaj Ramachandran, a senior majoring in computer science, feels “their manner of conveying,” one email at the same time every year, “has caused a divide between students and the administration. The vagueness of these emails combined with the lack of effective communication as to why the increases happen have made students feel like they have no idea where their dollars are going.”

Many challenges await the Carnegie Mellon administration in the coming years, especially if it decides to hike tuition again. Though there are pressing problems resulting from the rising costs, Ramachandran believes “the administration is willing to listen and is very well-intentioned overall. It’s in our best interests to approach them with clear, rational questions and concerns so that they can work for us.”

Provost Jahanian concludes, “We will continue to invest in key priorities, including financial aid support for students, and to work with students to maintain and enhance a vibrant and engaging [Carnegie Mellon University] experience.”