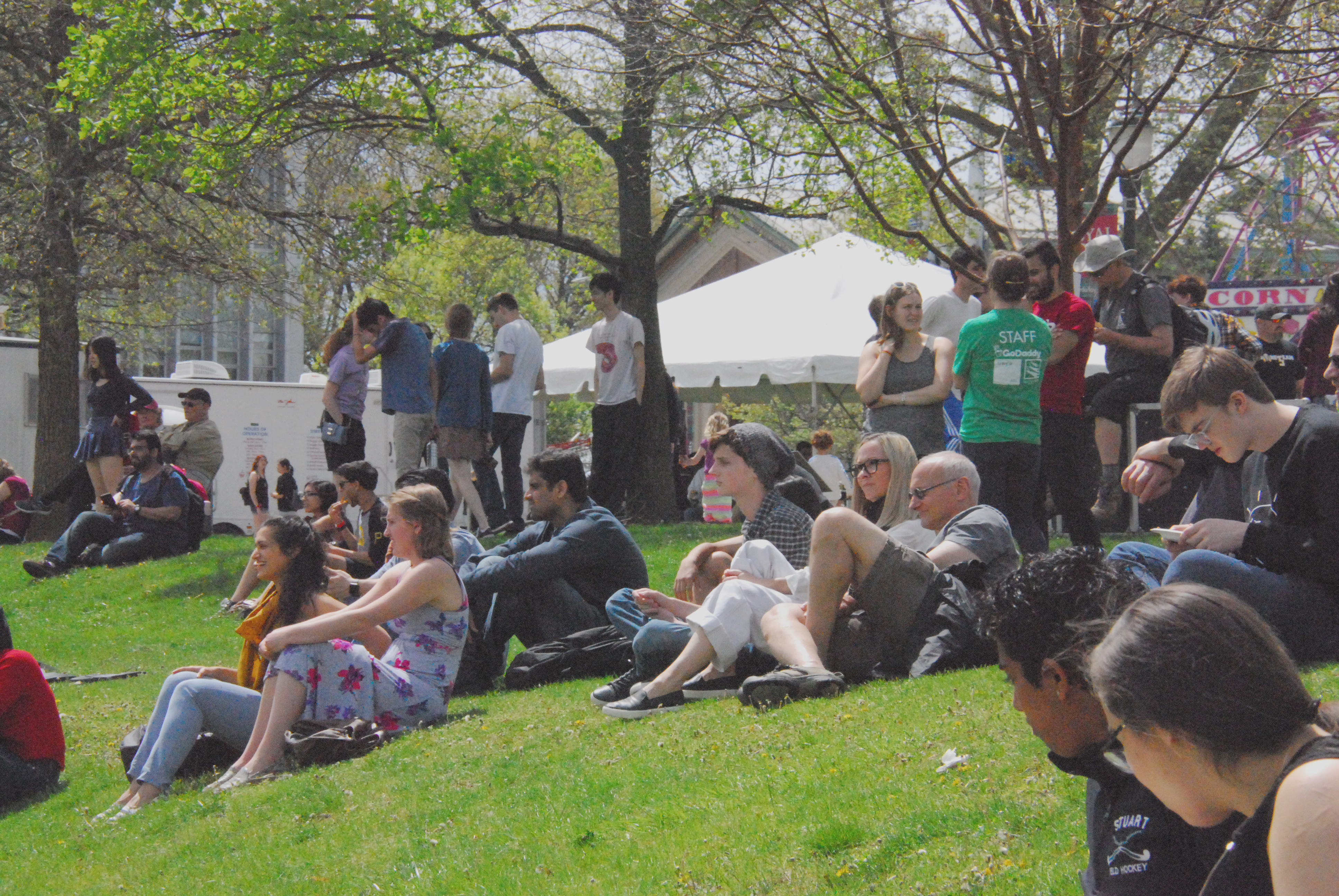 The Activities Board’s (AB) 1st Annual Comedy Showcase, held on Friday, April 21 from 1:30 p.m. to 6:30 p.m., was a different spin on Carnival’s usual comedy act. While the talent involved seemed to be great, the event was awkwardly held and placed, making for an odd experience.

For this year’s Carnival, instead of putting on one comedy show, the AB held the 1st Annual Comedy Showcase outside at the Tennis Court Amphitheater. Additionally, instead of having one performer, AB brought six performers to the showcase. Debra Digiovanni, Jordan Rock, Brandon Wardell, Andrew Michaan, Brendon Walsh, and Brent Weinbach all performed one after the other, bringing their own style of comedy to the event. However, the venue made it difficult for their styles to shine.

In addition, halfway through the event there was a 45-minute intermission with music from a DJ, who ended up sounding and looking like a living meme in his green track suit. He also ended up matching with the members of AB running the event, who were clad in black and blue tracksuit sets. To further emphasize his meme status, he also ended up playing and mixing songs such as the Four Non-Blondes song “What’s Up,” popularized by the infamous He-Man YouTube video, making everyone cringe.

In earnest, the comedians tried to make do with what they had. Their usual scenery, a small evening night club with seats close to the stage, sharply contrasted the huge sprawling green grass area with the first row of seats several feet away from the stage. For the most part, the scenery removed the interpersonal element of comedy that is usually integral in a stand-up performance. Andrew Michaan handled this the best, incorporating in audience interaction and fitting his vibe and energy with the crowd to make it a bit more lax, thus generating a bit more energy within the crowd.

The timing of the event also felt odd. The event encouraged people to come and go as they pleased or even to stay for the entire set. I wasn’t even sure how long to stay at the set because of the event’s lax nature. For most people, the huge lawn outside the Tennis Court Amphitheater was a place for people to relax, and the set sometimes served more as background noise than a performance, so members of the audience came and went as they desired. In fact, the set really did serve as background noise if you were out buying cotton candy or fries, contributing to the event’s odd nature.

While I was only able to see three acts, I could tell that there were two styles clashing that simply didn’t add up to a good event. Featured on MTV, Comedy Central, and known for popularizing the phrase “D***s out for Harambe,” Brandon Wardell, to quote Pillbox Comics editor Julie Sanscartier, “had a panic attack on stage,” and only performed for around 15 to 30 minutes of his 45 minute set. A great thing that Wardell did was that he made use of the massive space between him and the audience, stepping out into the grass to interact with people. It made the set feel a little more personal despite Wardell's realizing he had to censor his jokes around children in the audience. He ended up mixing in an “aux set” with some jokes before walking up to the AB event organizers and begging them down on his knees to “never do this again.”

The worst part of Wardell’s set, however, was probably that his remaining time was given to Brendon Walsh, whose set was comprised of a lot of penis jokes and childish and relationship humor. It made me feel a little uncomfortable, and while I was glad that Walsh could fill out the time better than Wardell did, he wouldn’t have been my first choice to follow Wardell with.

One of my friends commented before I headed out to the showcase that seeing five hours of comedy would eventually be tiring. While I was only able to attend three of those hours, I definitely began to agree with her. While the talent involved in the Comedy Showcase seemed to have huge potential, the situation was not ideal for them to show off their talents and the frustration and heat contributed to a tired vibe from the audience. If the event had been condensed to three comedians and held in the evening instead, I think the event would have had a much better turnout and reception and could have let people enjoy the rest of Carnival’s daytime events.