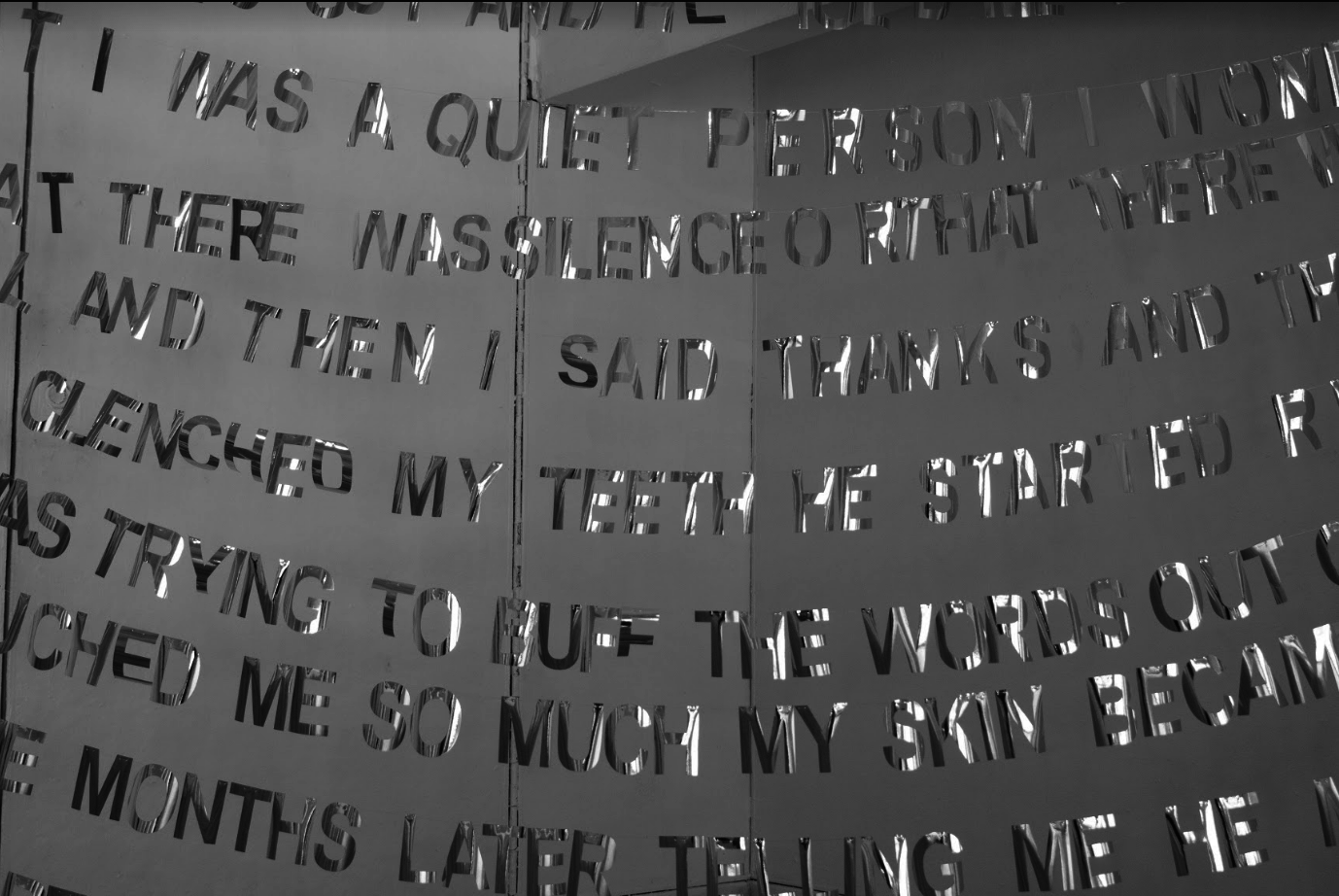 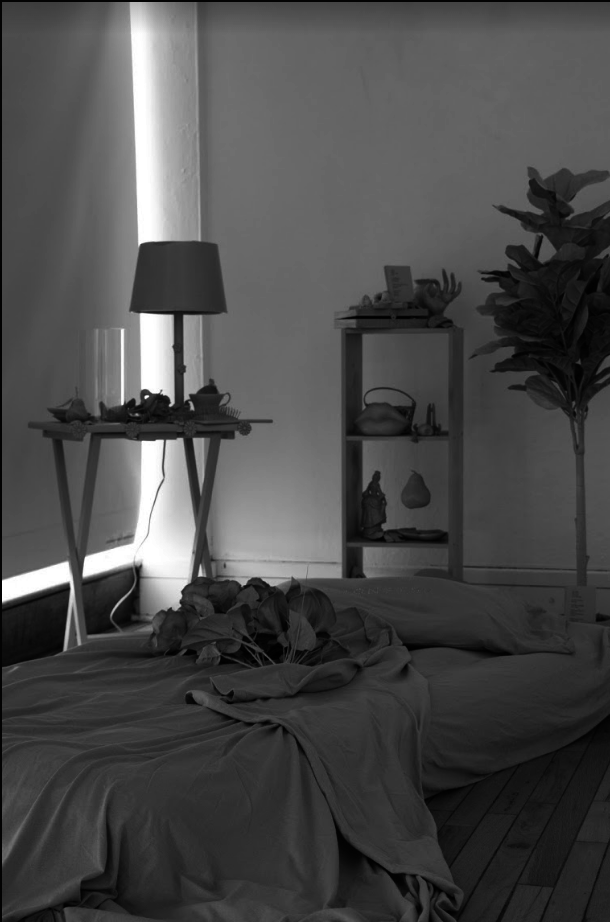 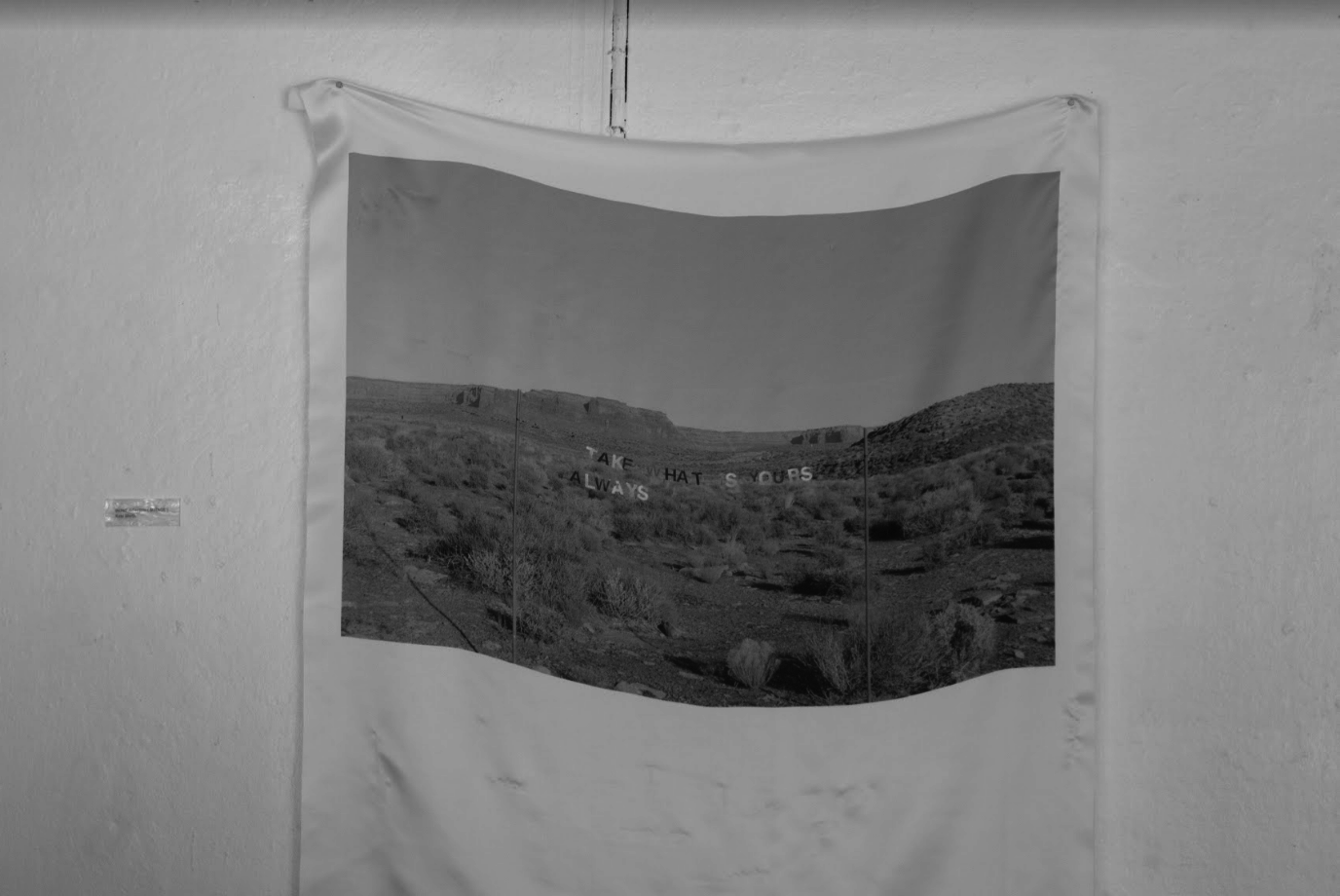 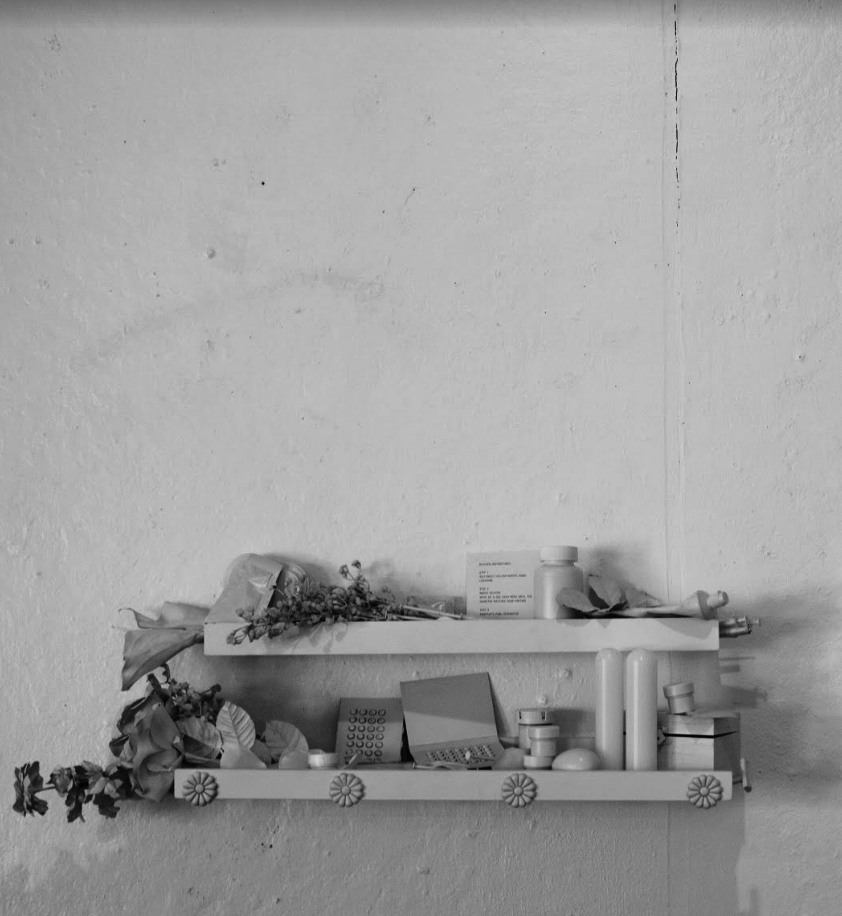 Around this time last year, The Tartan published an article on a show that included the work from then sophomore, now junior art majors Jenna Houston and Kate Werth. In just a year’s time, stepping into the Frame Gallery for their most recent group exhibit, titled Guaranteed Fresh, the growth and maturity of their work is clear. The show has a colder, more sterile feel. Collections of objects — a peace sign, flowers, birth control pills — spray-painted white, self portrait photography, and large installations of lettering wash over intimate narratives with a clinical feel. Juxtaposition plays a key role in the curation of their work, blending a matter-of-fact, commercial aesthetic with intimate and often somber topics relating to sexuality and girlhood. Guaranteed Fresh, Houston explains, combines these ideas with the notion of standards. The different standards of relationships and sexualities that exist in our cultures, communities, and societies, but also the ways that queerness, disability, and the spaces that girls occupy contradict these norms.

Werth is specifically interested in exploring how women exist in digital spaces. This becomes most evident in her performance video piece on Omegle, an anonymous chat site which has become rife with controversy for the lack of filters of on-camera profanity, nudity, and sexual content. Her piece's strength is its simplicity: to ask strangers, who are often there to solicit the female users of the site, how they know if a relationship is over. This causes a strange shift in the conversation into unexpectedly heartfelt stories of loss and heartbreak. It also shifts the power of relationship in a space where objectification of women is expected and normal. If there is one defining piece for Werth’s conceptual focus, I think it might be this one.

Her newer pieces involve delicate fabrics and materials to tell the stories of girls' relationships with their body and boys. Naturally drawn to text, Werth says all her work deals with text in one way or another. Pieces such as "Swimming Pools" recall digital language — think Tumblr text graphics and Pinterest-style advertisements — but through light, media, and context, allude to more complex narratives.

Werth has a knack for words, saying a lot with short, intimate, first-person narratives of girls navigating relationships. The delicate, silver letterings hung like buntings on the gallery walls play with shadow and arrangement in a way that makes it challenging to read, requiring the reader to spend more time with the text to figure out what is being said. Asking the audience to spend more time with language is a crucial part of her work.

The contrast of delicate, ethereal fabrics and text with the almost tangible presence the text claims has an effect of giving voices to words that are silenced because of inexplicable social expectations. It parallels Werth’s statement that women are expected to be delicate, but the “female form [is] strong and the vagina [is] a rugged place, not reactionary ... it doesn't need be activated by anything.”

Houston’s work also relies heavily on powerful, intimate narratives of girls and their relationships and bodies. In contrast to those of her collaborator, her pieces are more sculptural and solid — the mattress in one corner of the gallery and the images of female bodies are more tangible than figurative. In this show, her work is focused on two major themes: disability and queerness. Specifically, her work weaves in personal narratives of vulvodynia, a chronic pain syndrome that occurs in the vulvar area whose causes remain unknown and poorly researched. Through zines, poetry, and digital media, Houston explores the relationship of gender and body through this lens of chronic pain. The importance of such work is most clearly impactful in that it opens up a conversation on a topic of great stigma. Endometriosis, vulvodynia, and other topics of biosex female health, especially on issues relating to sexual organs, are still very under-researched in the scientific community. Moving from a lack of scientific attention to individuals' live experiences is extremely important in such conversations, and what Houston is particularly good at is talking about specific, nuanced aspects of such experiences. For instance, her work talks about navigating power in sexual relationships with the added burden of explaining a disability to boys who have not learned to prioritize their partner’s experience.

Her work in queerness appears naturally in following up this question of self in relationships. Houston begins to get at the broader idea of queerness, moving beyond simply sexual orientation to the ways it changes relationships in terms of balance of power and gender expectations. Her work subtly calls upon ideas of family, religion, and society while never losing focus on the first person narrator. The small poems placed around her sculptural installations ground her work in self portraiture and tie in seamlessly with Werth's focus on text. Houston's text here is matter of fact, but extremely personal. What the culmination of such work allows the viewer to do is have a rare insight into the world of girls growing up in a white, middle class, suburban environment. Houston says her use of text is recent, stemming from her work with zines that are intended to be both protests and informative.

Houston and Werth's collaboration feels natural. Their work appears to respond and divert in ways that add complexity to their narrative of girlhood. They say this collaboration is natural; although their work exists in separate niches, their overlaps in both classes and personality have created work that is uniquely related and often plays off of one another’s. The most notable similarity is in their strong use of personal narrative. Their own experiences with their bodies, relationships, and culture are the main influence of their work. From the personal, they achieve the universal.The minimalistic approach to the aesthetics — the limited color palette, the intentionality of material and form — emphasizes the question of text versus silence. These narratives often play with what has been left unsaid by girls in situations where their agency has been compromised. The audience, especially female audience, recalls their own experience as they empathize with the stories presented. Guaranteed Fresh’s expert focus on claiming space to give voice and agency to women and girls is a testament to the honesty and power of their work.

In the future, both Houston and Werth talk about expanding their work outward in subject matter. I am excited to see how their work continues expand into more diverse experiences — spanning race, gender identity and social class — while remaining grounded in intimate, personal perspectives. In a social and political climate where empathy and importance placed on marginalized voices feel lacking, their work and particular brand of activism is more needed than ever.