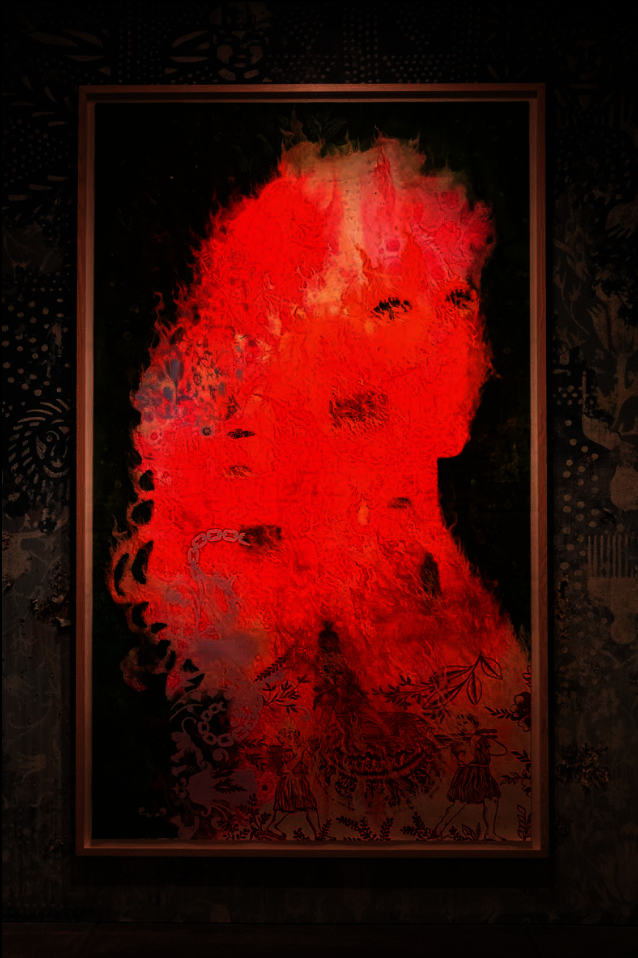 Walking into the newest special exhibition at the Andy Warhol Museum, painted by artist Firelei Baez and titled Bloodlines, is like walking into a magical garden. Gorgeous, powerful women gaze out at the viewer from every wall, surrounded by intricate textures and floral designs. Contrary to what a lot of people think of when they hear the words "contemporary art", the show is accessible, pulling the viewer in with delicate flowers, fine hair textures, and curvaceous female forms running throughout the work in rich, dramatic colors. A wall stretching the length of the gallery was painted a soft blue and completely covered in floral medallions and elaborate patterns, and my first thought upon seeing it was, ‘I wish this was what my room looked like.’

But after the initial wave of wonder at the beauty of the space, the viewer begins to notice the complexity of the work. The woman brought to life in vivid reds with the stunningly beautiful headdress is actually wearing a tignon, a head covering required for free women of color in antebellum Louisiana to make them less attractive to white men. The women forced to wear tignons threw the attempted mark of inferiority back in the face of their oppressors and turned them into a fashion statement. The floral medallions on the installation contain the Black Panther symbol and the Black Power fist. Running throughout the whole exhibit is a complex interplay of symbols of race, repression, and resistance. Born to Haitian and Dominican parents, Baez’s work references the complexities of cultural diaspora from both a personal and global perspective but is ultimately an exquisite celebration of beauty in history and the individual.

Baez is a Dominican woman based in New York. Bloodlines is her first solo show and is an impressive discussion of womanhood, globalism, and cultural traditions. At first, Baez’s paintings, with their emphasis on laborious detail and personal honesty, may seem like an odd choice for the Warhol. Warhol, with his quick and relatively easy screen prints and affectless persona, seems at odds with Baez. However, both artists work with cultural icons to highlight certain aspects of their society. Just as Andy Warhol’s work was a playful commentary on commercial icons, working with the construction of what defines an American identity, Baez works with the narrative of history of woman of color. The way we — immigrants, refugees, or people in countries who have experienced recent changes in political structure — understand history is blurry and incomplete. We understand it through an amalgamation of material cultural, aesthetics, and key stories.

Rather than in screenprints and photography, the media that brought fame to Warhol, Baez uses more traditional materials. Her exhibit consists of enormous paintings with the most delicate, precise brushwork. The use of acrylic, ink, and yupa paper in large scale gives the work a sense of nostalgia and a sense of love and care that allows you to feel the artist infusing herself into the narrative she is constructing and curating.

One of the most interesting things about the show is the way Baez uses repeated symbols and motifs to build meaning. The floral motifs on the walls appear in some of her paintings. Indigo and china patterns, colonial era crafts that came with famine and exploitation, bubble up in different parts of the room. And everywhere, there are references to textiles from different cultures.

Textiles' aesthetics are interesting for a number of reasons. Primarily, textiles evoke a sense of body and the history of women. They allude to complex stories of cultural exchange and oppression, which the audience and even the subject does not fully understand because of the scale and subjectivity of these narratives. For example, the painting of the tignon explores a complex relationship with the textile, painting the tignon in beautiful, rich patterns but also making it dominate the painting, simplifying the wearer to bright colors and removing all her facial features but her eyes, which stare emotively at the viewer, full of power. The Japanese brush painting and Indian block print patterns that reappear in multiple works reference not only the cultures they come from but also the commercializations of their aesthetics. The viewer is asked to consider the textiles involved in conventional, Western stores. Clothes and textiles are tools of oppression and empowerment — they are ways of controlling how others see you. They capture the social expectations of the time, but in every painting the woman is made the subject of an image to tell her own story. So, as much as Baez’s work focuses on historical narrative, it brings power to the women by placing control of the narrative in their presence.

Another repeated motif in the exhibit is, clearly, the female body and hair. They are used as symbolic tools to primarily to discuss gender and race. Her work references laws surrounding natural hair and the paper bag test — laws devised to define and control race in Caribbean society — challenging the viewer to categorize the multicultural, uncategorizable women and work before them, but it also alludes to legends and imagery from both Caribbean and western culture involving women as seductresses or monsters. Baez’s incredible ability to create beautiful textures of hair or fur in tiny brush work then creates a new narrative of these women. Breaking away from the Rubenesque figures, intended for aesthetics and titillation, her figures claim their presence in a style of art that recalls academic and anthropological drawing. Her figures hold their own, forcing the viewer to see them as individuals and not ephemeral sexual objects or a stand in for a larger culture.

Perhaps, though, the most impactful motif in the show is the grounding of the work in portraiture. The eyes, the body forms, the references to real world people and objects all make it so that the work is about people rather than general concepts. For centuries, artists have used eyes as a way of drawing the reader into a more psychological painting, and reading into their expression allows one to know the artist and their subject. The eyes in Baez’s work reflect power and pride. Self-portraiture is an element that Baez often comes back to in her work. This is such an important part of her work because vague references to historical narratives and aesthetic traditions on their own aren’t enough to connect with an audience, most of whom are likely not from the cultures being discussed. Because the self-portraiture allows her to lay claim to part of these stories, to say this is where she belongs and a part of who she is, we get a heightened level of intimacy with her work that makes it tenfold more impactful. It implies meaning beyond textiles, war, and colonialism — it gives us a peek into her own story and the love she gives to her subject matter.

The sensuality of form combined with the seriousness of subject matter in the show creates layers of stories that are difficult to untangle. The flowing forms from the acrylics and ink serve to further blur (literally and metaphorically) the intention of the symbolism in Baez’s work. It leaves us with a question: Where does her work fall in the world of activism and resistance? Artistic traditions tell us that there is power in representation — the Chicana art movement, for instance, worked with imagery of religion, womanhood, and industrialization to discuss social injustices, but what perhaps is most powerful in Baez’s work is that, in obfuscating meaning and central references through contradictions in symbolism and layers of narrative, it suggests there is power in moving beyond identity politics. That there is something universal about working to unravel who we are and where we come from, and in that moving beyond the hard lines of identity beyond easy communication we can share something more intimate and real.