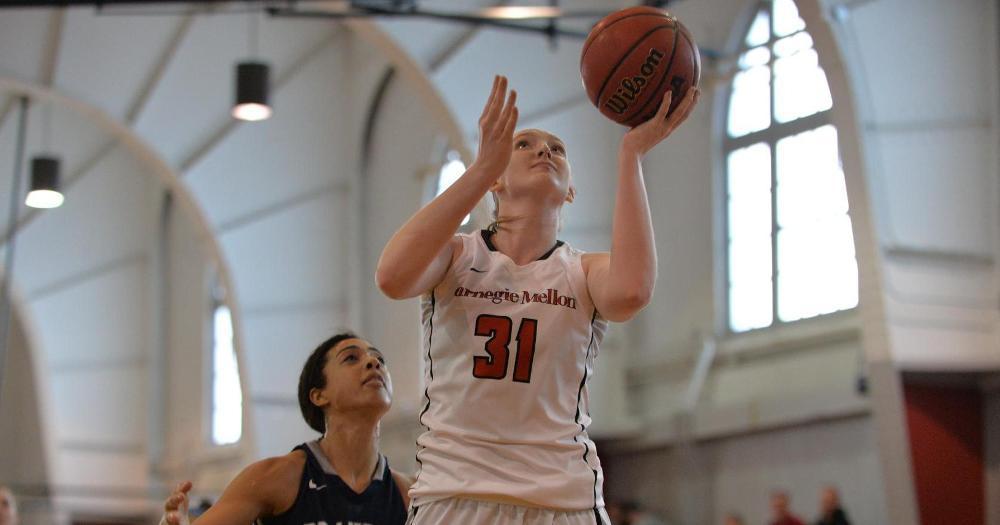 Senior center and forward Lisa Murphy flies past a defender to score. Murphy is a strong factor for the team. (credit: CMU Athletics)

The Carnegie Mellon women’s basketball team began Alumni Weekend by putting away a wire-to-wire victory against the Brandeis Judges on Friday, snapping a four-game losing streak.

The Tartans moved their record to 16–5 overall and 5–5 in the University Athletic Association (UAA) for the season.

The game started auspiciously for the Tartans. After winning the opening tip, the Tartans whipped the ball around the perimeter for the full shot clock, finally finding first-year guard Makayla Filliere for a long three that found the bottom of the net.

Filliere added a jumper from the left corner and another from the free throw line in an opening run that gave the Tartans an early 14–6 lead.
It wasn’t all smooth sailing for the Tartans. Their 2–3 zone stifled plenty of Brandeis’ possessions, but it also created space for offensive rebounds.

Brandeis was able to use a run built on several second chance points to climb all the way to 17–16 before the Tartans put up a 9–2 run to stop the bleeding.

The Tartans did give up one more second chance bucket at the end of the first quarter and went into the second up 26–20.

The tide turned as the Tartans were getting more successful with their rebounding by going after missed shots more aggressively. In addition, senior center Lisa Murphy’s rim protection went from tough to dominant in the second quarter.

Even offensive rebounds were turning into difficult, contested shots that Brandeis wasn’t able to bury.

Offensively, Murphy helped key a 12–2 run that gave the Tartans a 43–30 lead at the half, including a layup that came off a drop step to cap off the run at the buzzer. No matter who Brandeis sent to stop Murphy in the post, Murphy was stronger and more able to take the precise steps necessary to play down low.

Brandeis had no answer for her on either end, and she was able to collect 15 rebounds and 22 points on only 13 shots.

The Tartans also went on a run in the first half of the third quarter, extending their lead to 20 points before the final period began.

While Murphy was dominant on the low block, the Tartans’ successful offense had a huge assist from excellent three-point shooting, finishing around 40 percent for the game.

Filliere finished hitting three of four from deep while sophomore guard Jenn Mayberger added another three. Carnegie Mellon’s ball movement stood in stark contrast the more dribble-based play from the Judges and it showed in the shooting stats.

In all, the Tartans’ nine shots made out of 23 attempts from three point range towered over Brandeis’s two out of 10 and the difference was more than the margin of victory.

The Tartans will continue their season on Friday, Feb. 17 when they take on Rochester in a rematch of their game on Jan. 20. The Tartans won that game at home 71–62.