More competitive tadpoles grow up to be more toxic 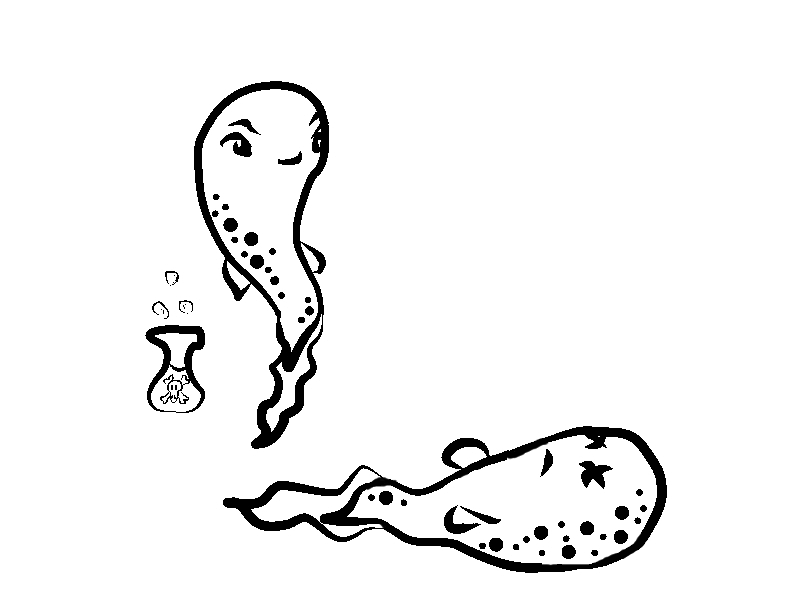 Tadpoles use poisons to defend themselves against their numerous predators, which include fish, birds, and insects. Last week, new research found that tadpoles may also use their poison to get an edge in the competition for resources. The tadpoles of the common toad are more poisonous when there are lots of other tadpoles to compete with, the study found. The more crowded an area is, the more poison is found in the tadpoles there.

In the study, Hungarian ecologist Veronika Bókony and her colleagues divided toad tadpoles into simulated ponds. The team wanted to approximate varying levels of competition, so different ponds had different numbers of tadpoles. In some ponds, the toad tadpoles were mixed with frog tadpoles; some had only toads, and some had only frogs. The frogs were included in the study to represent increased competition because they grow faster and larger than the toads. As predicted, the tadpoles from more competitive (crowded) ponds grew up to be more toxic, no matter what species they were competing with.

Surprisingly, at equal levels of competition, the tadpoles produced more toxin against their own species than they did with the frogs. Biologists have generally believed that greater population density causes tadpoles to become more toxic, based on observations of tadpoles in the wild, but this study provided the first evidence from a controlled experiment in the lab.

The study’s findings, along with the quality of the research, are making an impression among Bókony’s peers in the ecology community. The study is “very well designed,” says Thomas Hossie, an ecologist at Trent University. “This paper is another great example of how amazingly plastic larval amphibian traits really are.” Gary Bucciarelli, an ecologist from the University of California, Los Angeles, called the findings “compelling.”

Beyond the immediate implications for tadpole research, the study reflects the changing way scientists examine why protective traits evolve. Traditionally, it was thought that animals evolve protective traits like poison so they can defend themselves against predators. But findings like these “really begin to scrutinize the idea that predation alone drives variation in animal chemical defenses,” says Buciarelli.

Bókony plans to continue researching the tadpoles: she wants to more closely examine “what exactly [the tadpoles] are defending themselves from” when only other tadpoles are present. It’s possible that they’re defending themselves against cannibalism, but Bókony has another idea. She thinks that the poison could “provide a sort of immune defense against contagious diseases they could catch from [fellow tadpoles], especially when crowded.” This possibility is what she and her team plan to study.