NFL Teams begin the 2016 season ready to fight or falter 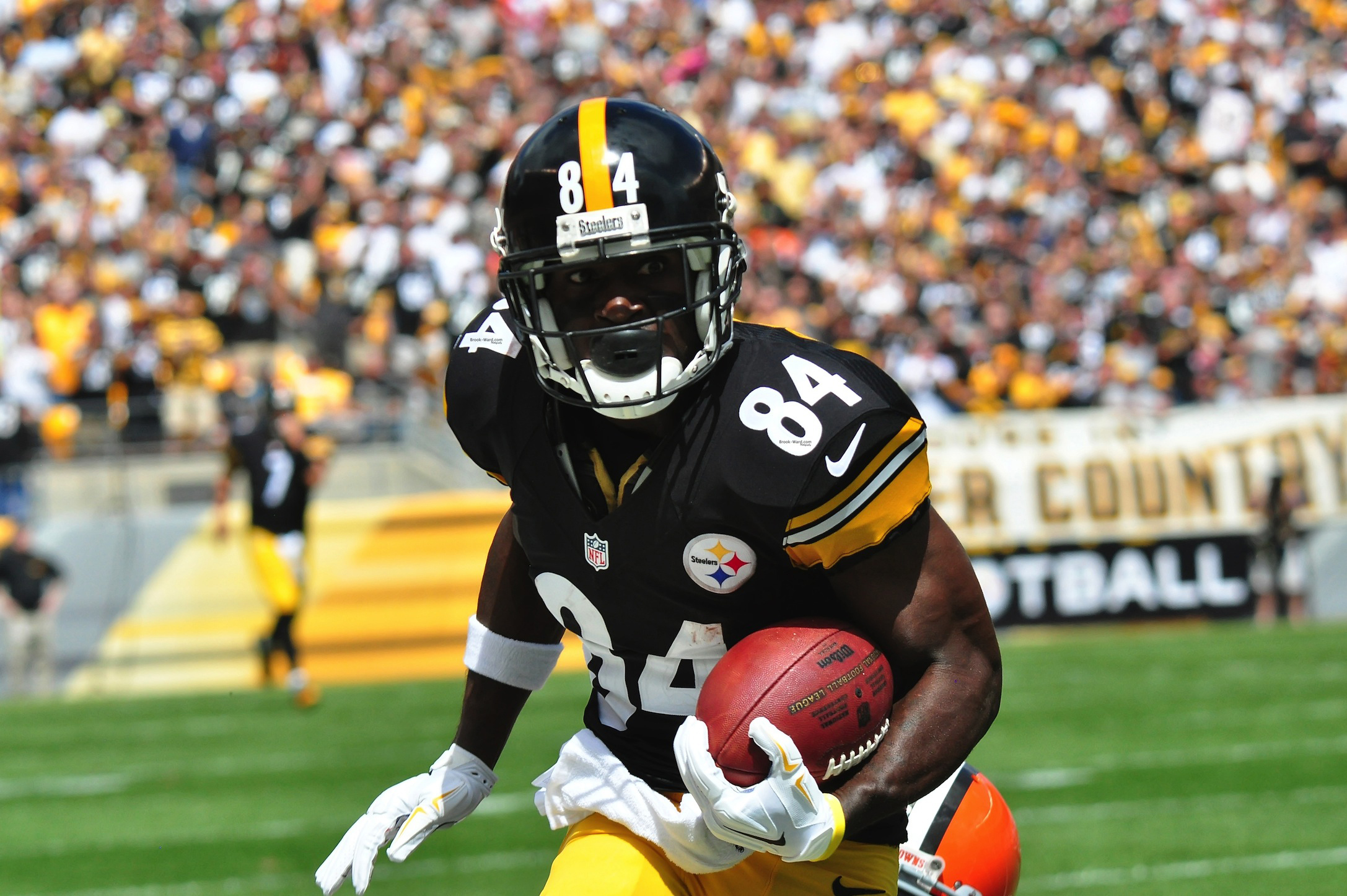 Steelers wide receiver Antonio Brown concentrates on running down the field to the end zone after catching a pass. (credit: Courtesy of Brook Ward via Flickr Creative Commons)

While the NFL no longer features the parity it once enjoyed, the short, 16-game schedule still produces some wild year to year changes in the standings based on luck and the rapid changes in NFL rosters. This exercise tends to go poorly, but here I’ll predict who will improve, who will tumble down the standings, and who will raise the Lombardi Trophy in February when it’s all said and done.

The Raiders 7–9 record last year accurately represented their level of play. The defense was middle of the pack. Defensive end Khalil Mack put a lot of quarterbacks on the turf and disrupted plenty of plays. He also was a very good run stopper when the time came. However, the rest of the defense was only okay and the secondary occasionally looked plain bad. The offensive line was solid and kept a clean pocket, but quarterback Derek Carr lost 375 yards to dropped passes and did not have a good check down option, limiting his efficiency.

Running back Latavius Murray also struggled to deliver on a lot of preseason hype managing only an even four yards per carry as the pass-oriented line struggled to create holes for him. The team split their one-score games, going 5–5 and the turned the ball over about as many times as they forced turnovers, both very sustainable rates.

However, the Raiders offseason and team construction provide a lot of reasons for optimism.
The Raiders were able to sign former Bengals safety Reggie Nelson, the exact kind of ballhawking safety that makes life easy on a secondary. Nelson’s ability to read the pass and close the gap between him and deep receivers gives the Raiders a safety blanket when teams try and go deep, freeing up cornerbacks to play more press coverage and create contact before receivers can even get into their routes.

The secondary also improved with the arrival of former Chiefs cornerback Sean Smith. Smith’s ability to lock down great receivers was consistently on display in Kansas City last season, and quarterbacks able to survive Mack’s destructive backfield presence will have another tough obstacle when trying to hit their top receivers. We could see first round pick Karl Joseph start at the strong safety position towards the middle of the year, but he is currently not listed as the starter and the moves made in the secondary will improve this offense with or without Joseph.

The arrival of linebacker Bruce Irvin from the Seahawks also gives the Raiders a pass rushing complement to Mack who can also cover tight ends and make passing on this Raiders defense a nightmare.

On the offensive side of the football, the Raiders signed guard Kelechi Osemele away from the Ravens. Osemele is the best guard in the NFL and will give Murray plenty of room to run. If Murray can’t capitalize, expect rookie running back DeAndre Washington to take over. The Raiders are excited about Washington and Murray will be on a short leash with Osemele pancaking defensive linemen.

An improved running game will help the Raiders create space and show us another year of improvement from Carr — who already played very well last season — and second year receiver Amari Cooper who showed flashes of dominance last year despite his high number of drops. Another year in the league will help Cooper grow out of that issue, and he and receiver
Michael Crabtree should form one of the best wide receiver duos in the league for the second straight season.

Last year, the Broncos became the worst team to ever win the Super Bowl. Football Outsider’s Defense-adjusted Value Over Average (DVOA) ranked them 8th overall and even that feels a bit high. The Broncos’ Pythagorean win expectation, a predicted number of wins based on the number of points scored by and against Denver, was 8.7, indicating that they were closer to an average team than the top seed in the AFC. They then won two squeakers in the playoffs before trampling the Panthers in Super Bowl 50. Further, the Broncos went a completely unsustainable 9–3 in one-score games. That number moves up to 11–3 if you include the playoffs. The Broncos started this season on a similar note, getting away with four helmet-to-helmet hits on Panthers quarterback Cam Newton and still needing Panthers kicker Graham Gano to shank a game-winning field goal wide left.
Teams tend to regress towards .500 in one-score games, so that alone would portend some slide in the Broncos record, however, the Broncos offseason carries even more bad news.

The most obvious hole for the Broncos is quarterback, but Peyton Manning, who is now retired, and Brock Osweiler, who is now a Texan, combined to be pretty useless last season, so the combination of Trevor Siemian and rookie Paxton Lynch can’t possibly be much worse than last year. The drop off comes in other positions.

The loss of both linebackers Danny Trevathan and Malik Jackson dismantled the dominant Broncos middle linebacker pair from last year. Jackson in particular was probably the most underrated player in the NFL and was a destructive force in both the run and the pass, using his rare combination of speed and strength to get to holes created by the offensive line and then plug them. The Broncos missed both of them on Thursday. Despite their win, the Broncos looked useless against Carolina’s rushing attack, only succeeding when their offense gave them a lead and forced Carolina to pass.

Running back CJ Anderson might have a great season and replicate his performance from Thursday night a few times, but if the Broncos’ offense is that reliant on one player, there will be games when they can’t build a lead and teams will run right up the middle. That could be a very successful strategy against these Broncos.

Team that will win the Super Bowl: Pittsburgh Steelers (10–6)

The Steelers have the best offense in the NFL, and it’s not very close. The right side of the Steeler’s line is a destructive force, putting defenders on the ground and leaving tons of room for the Steelers talented backfield to work their magic. Center Maurkice Pouncey and right guard David DeCastro keep the a-gaps very clean for Steelers runners. The left side of the line is not quite as good and will miss left tackle Kelvin Beachum who left for the Jaguars, but it’s still solid.

Missing running back Le’Veon Bell for three games will hurt the offense, but running back DeAngelo Williams was very productive replacing Bell as Bell missed most of last season and should continue to succeed in that role.

Steelers quarterback Ben Roethlisberger has been an excellent quarterback for years, extending plays with his footwork and hitting receivers at all levels of the field. The fact that he now gets to throw to Antonio Brown — the best wide receiver in the league — is why the Steelers have finished in the top three in offensive DVOA each of the last two seasons. Losing wide receiver Martavis Bryant for a full season is not good, but wide receiver Markus Wheaton should capably replace Bryant.

Offensive production also tends to be stable. A team can alter their game plan much more reliably to fill in for lost offensive talent since they control where the ball goes on any given play. This means the Steelers offense isn’t likely to crater without an obvious cause like some defenses do.

The Steelers’ defense has been their weak point for the past several years and it could stay that way this year, but there are reasons to believe the Steelers can improve. Their defense is very young and stocked with promising players who can take this team from an average defense to a solid defense if they continue their current development.

Linebackers Jarvis Jones and Ryan Shazier have shown they have the talent to be great NFL linebackers since they were drafted in 2013 and 2014, respectively. They should both continue to improve and, combined with linebacker Lawrence Timmons, could become one of the better linebacking groups in the NFL. That’s also assuming linebacker Bud Dupree will not come back this season. He’s currently expected to miss eight games, and if he is able to take over for Arthur Moats towards the end of the season, the Steelers could have some of the scariest blitz packages in the league. All four of those linebackers are capable rushing the passer, covering, and stopping the run, making the defense very versatile. Defensive end Cameron Heyward should continue to be an excellent pass rusher and rookie defensive tackle Javon Hargrave has shown both the explosiveness and quick hands required to get past interior linemen in the NFL and also play at many spots along the defensive line. Hargrave adds to the collection of talent that could make this Steelers front seven scary.

The Steelers capably stopped the run last season, but this year they could have a pass rush we haven’t seen from them in years.
The secondary is still very weak and this defense won’t be among the best in the league, but if it can be in the second tier, this offense should be good enough to propel the Steelers to a 7th NFL championship, which would be the most in the NFL.