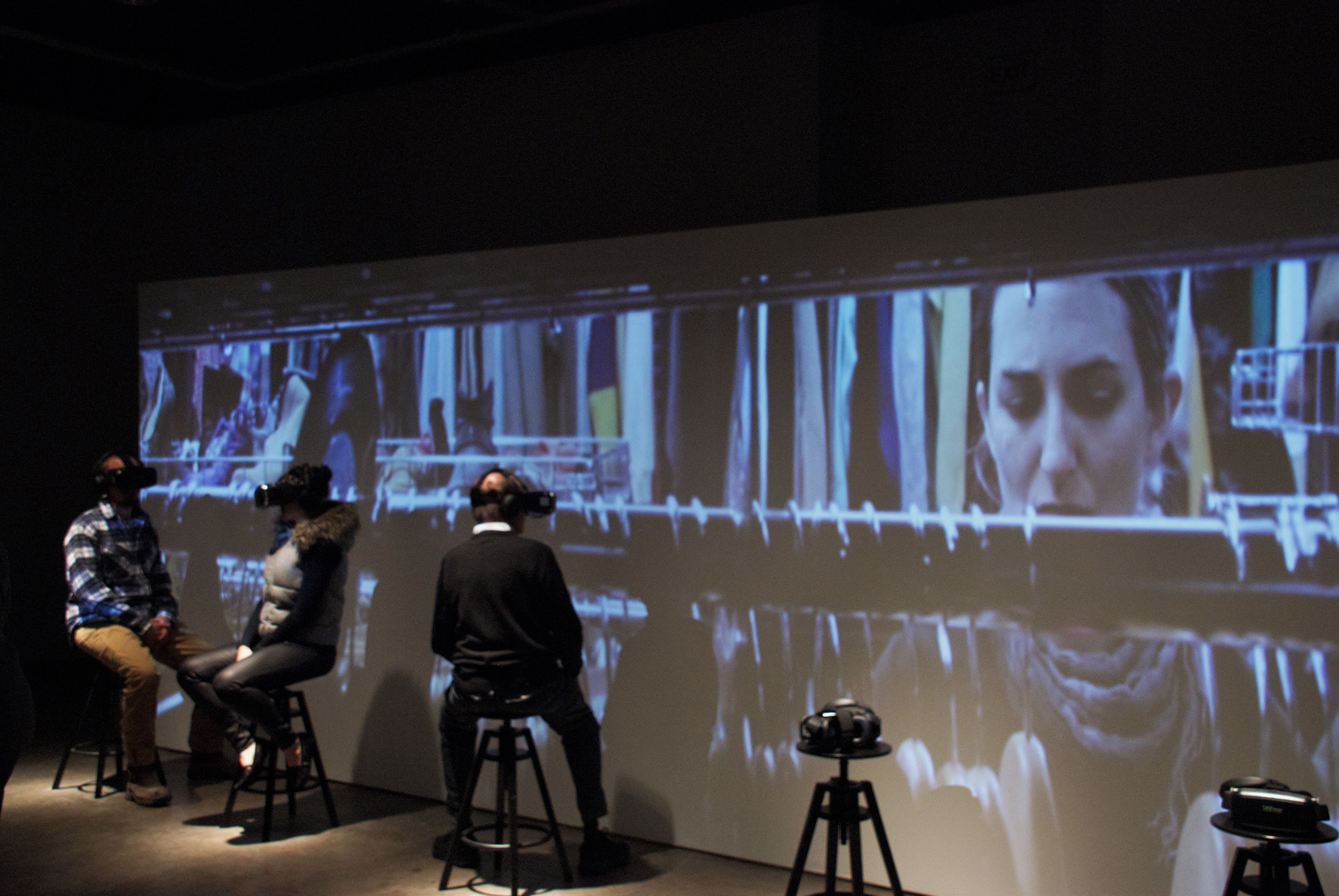 Iranian artist and Carnegie Mellon student Nima Dehghani's MFA thesis, titled "Decompensation," is currently on display in the Miller Gallery, where it recreates five psychological stages that refugees experience as they settle into an alien socio cultural context in the form of a multimedia installation involving projection, sound design, and virtual reality. The piece is participatory in nature. A large screen with a projector serves as the theatrical backdrop to five stools. On each stool sits an Oculus Rift (virtual reality simulator) and a pair of headphones. On the screen, above each stool is written the stage it corresponds to: Early Arrival, Destabilization, Exploration, Return to Normal Life, and Decompensation. People are invited to sit and experience an immersive representation of each psychological stage through the Oculus and headset, while simultaneously becoming performers for the rest of the gallery. "Decompensation" was a collaboration between Dehghani, Soosan Lolavar, a masters student in the School of Music’s Advanced Music Studies certificate program in music composition, and Laura Stokes, a dancer and choreographer from the greater Pittsburgh area. The piece is representative of Dehghani’s long-term interest in new technology and media as well as theater and their use as more than just a means of entertainment, but also as a platform for social debate.

Could you tell us a bit about your career as an artist before coming to Carnegie Mellon?

"I came to Carnegie Mellon in 2013. Before that, I was in Iran. I studied architecture and worked as an architect and a designer for five years. Besides that, I was involved in theater. I was writing plays and I later became a director when a festival invited me to perform one of my plays and there were no directors who could do what I wanted. For that play, I won a prize for directing and two weeks later, I won another for playwriting, which was around the Iranian equivalent of two thousand dollars. I was twenty at the time and it was too much. I thought that maybe I can make money out of art, instead of architecture. I was always interested in combining art and technology in all of my performances. After around four years of working in the professional theater world of Iran, I decided that I needed to improve myself. There was nothing else to get here, so I decided to apply to art schools. I chose the MFA program because it’s a very open program so you can do whatever you want to do. I was the kind of person who was always jumping from one field to another, so I really needed a program that helped me to combine all of them."

In your future career, are you planning on returning to your roots in theater, or continuing to do gallery and installation pieces?

"I’m not sure what will happen after graduation, but I really don’t like gallery work. I don’t like to make a piece for a gallery and just leave it there. The work needs to be alive. I would say that I’m more interested in public and social practices rather than visual art in galleries, whether it is through urban installations or public performances. It needs to somehow be engaged with people."

The fact that art seems to be getting further and further removed from non artists is a common criticism these days. Why do you think this is the case?

Nima Dehghani’s work, along with the work of all the other graduating MFA students, is on display in the Miller Gallery as part of the exhibit titled Self Driving Car. The exhibit is scheduled to stay until April 10. Dehghani’s piece is open to the public Tuesday to Sunday from 4 to 6 p.m.