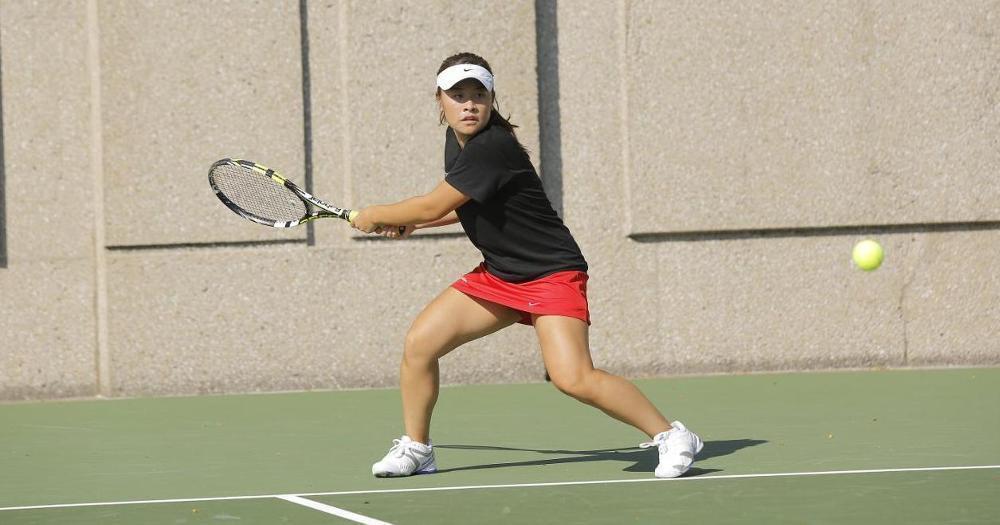 First-year Minami Makino prepares to continue a volley during the match against Grove City on Wednesday. (credit: Courtesy of CMU Athletics)

The Carnegie Mellon University women’s tennis team faced off against the Grove City College Wolverines on Wednesday, and the Tartans dominated their opponents throughout the competition to end the day with an impressive 9–0 victory. The Tartans improve to 9–5 on the season with the victory and are now ranked 7th nationally.

The Tartan women opened the match with explosive offensive play that netted them three victories in doubles play, each with a score of 8–0. The duo of junior Nicholle Torres and first-year Charlotte Deiss quickly swept their match in the second doubles position, while the tandem of sophomore Cori Sidell and first-year Minami Makino did the same in first doubles. The final duo to complete their match was senior Brooke Tsu and first-year Marina Selenica in third doubles to finish the doubles sweep.

At this point, the future of the match looked grim for the Wolverines. A comeback was still possible, but it was visibly evident that the Tartans had completely outmatched their opponents. Despite their growing lead, the Tartans did not become complacent. Carnegie Mellon maintained pressure for the entire competition and there seemed to be no stopping them.

Singles play proved to be no different than doubles as the Tartans picked the Wolverines apart, winning with straight set victories in every single match. Makino started the singles action off with the first point for the Tartans in a clean 6–0, 6–0 victory in third singles, and Selenica followed her lead to win by the same score line in fourth singles. Tsu did give up points in her singles sets, but she showed no signs of weakness as she took the match 6–1, 6–1 in first singles to put the Tartans up a comfortable 6–0. Deiss maintained the tempo by winning 6–1, 6–0 in sixth singles, and first-year Jamie Vizelman showed promising play as she dominated her second singles match 6–0, 6–0. Senior Abbey Hamstra finished the day by winning 6–1, 6–1 in fifth singles, earning the ninth and final point for the Tartans.

The Tartans will use this success as a confidence boost, but by no means will they underestimate their next opponent because of the win. The Tartan women take on Westminster College at home on Monday, March 21 at 4 p.m., and they are going to be hungry for another victory.