Vaasavi Unnava and Aaron Gutierrez to push limits of discussion 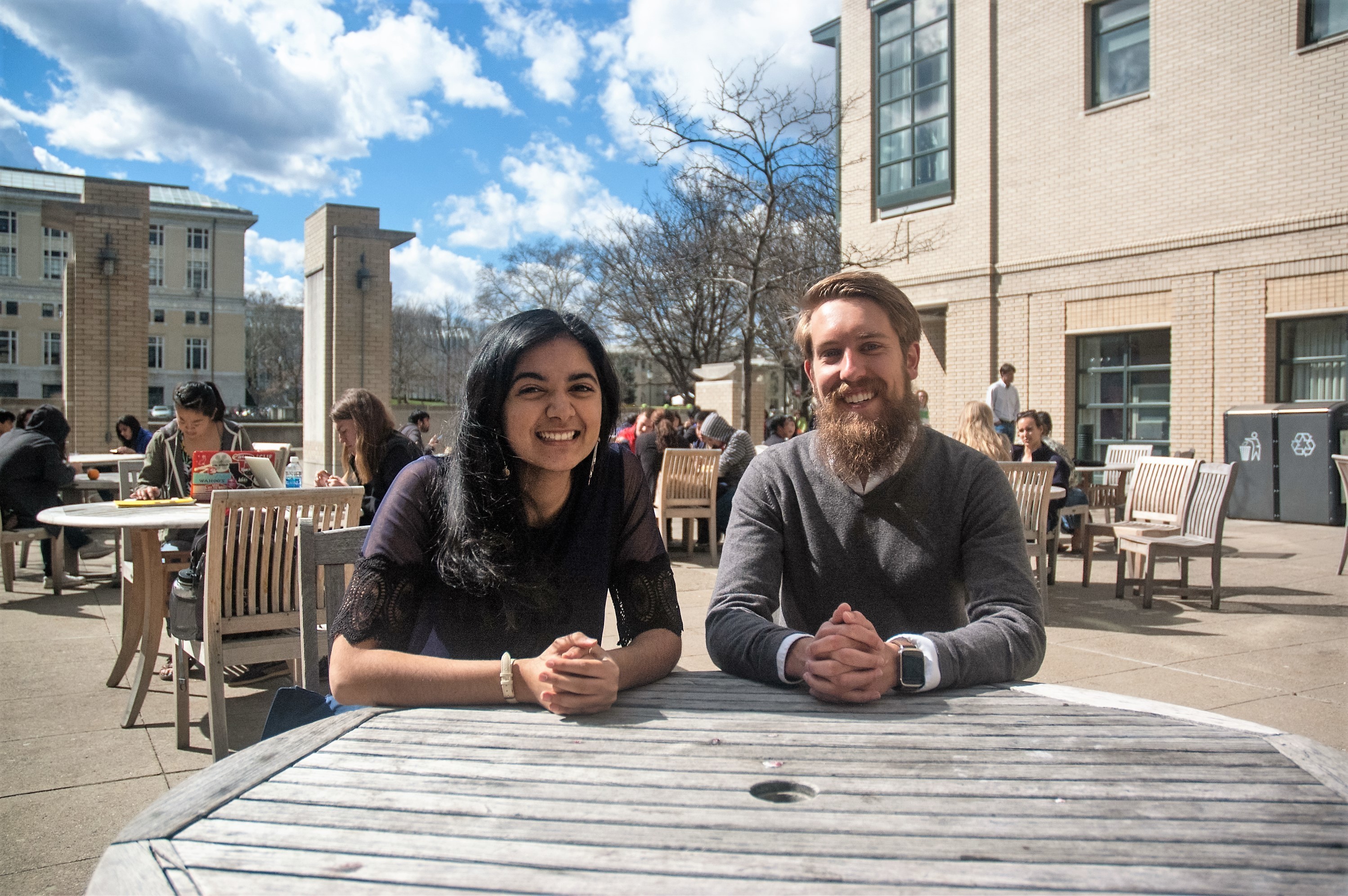 Sarah Gutekunst (Publisher, The Tartan): Why are you running and why should students vote for you?

Vaasavi Unnava (junior economics major, student body presidential candidate): I think a big part of it is that, as with any position on campus, you really have to make an active decision, especially when it’s a position that’s generally afforded a lot of power. And so, thinking over it, when I came to the realization that I wanted to run for student body president, it was because what I want to achieve on campus, in terms of making an infrastructure so people can take ownership and make their lives better in the community, was something that could only be achievable with the position I wanted to run for.

Aaron Gutierrez (junior computer science major, student body vice presidential candidate): Over my time at Carnegie Mellon I’ve seen many different aspects of how the university operates, and in doing that, you really understand a lot of the things that go on better. I see this as an opportunity to bring that understanding to a much larger percentage of the population. I see this as an opportunity to get everyone more informed and more engaged with their campus, so that they can see how all the pieces fit together.

SG: Can you explain the President’s Initiative?

VU: Absolutely! Sorry I just get really excited about it. [She laughs.] When we [were] thinking about all of these really big cultural issues that are happening on our campus — sexual assault and relationship violence prevention, academic integrity, mental health — every time, we discuss these things, but then we don’t really do anything about it after that. So the heart of the President’s Initiative is creating some sort of infrastructure, almost an incentive structure, so that clubs and organizations can look forward and say 'we know that this is a problem and we’re going to do something about it.' That involves pushing a meeting called "the board of directors," which is typically reserved for executives of student organizations, to the front of the year. Having all the students come together, identify which problems they want to work on for the campus community, and form partnerships across clubs and organizations, so that they can actually do something within their clubs and organizations to create a university-wide conversation within the student body. At the end of the year we’re looking to reward the clubs and organizations that have done the most innovative things with some sort of monetary benefit to show we’re excited for the positive changes they’ve brought to the community.

SG: How do you plan to mobilize the community more fully, to get it to trickle down to the corners that it doesn’t usually reach?

AG: I think a big part of that comes from the fact that the President’s Initiative targets organizations, which for most people is one of the most formative parts of their college experience. Everyone is involved with academics, but that’s not really the defining part of it. So I think engaging people at the organization level is where people are excited to be doing whatever they’re doing, and it’s a way to engage the broader campus community. You’re not going to go to a presentation in the economics department with the same enthusiasm that you would go [to] Dancer’s Symposium. It gives an opportunity to engage students where they’re excited.

VU: I would add to that I think what we’re doing now is an attempt to trickle down. The President’s Initative is an attempt to meet students where they are. Trickling down is having discussions about it, having education about it, which is what we’re doing already, but what we want to do with the President’s Initiative is to say 'look we’re done with that because it’s not working. So why don’t we just take ownership ourselves.'

SG: Great. So what do the Carnegie Mellon tax forms say?

AG: And most of that is just saying 'Carnegie Mellon subcontracted some research to the Software Engineering Institute and the Department of Creative Writing.' There’s a lot of internal money transferring that just gets documented in there. I think the meat and potatoes of it is the assets that Carnegie Mellon has but also it gives a brief overview of trustee salaries and executive salaries and [the] highest paid salaries within a department, and also gives some information about what kind of federal grant money we receive, for scholarships where that money goes, what money for scholarships comes from the endowment, [and] what the endowment pays for. It documents that the university is putting federal money to good use.

VU: And it also goes into how the endowment is invested. A lot of people don’t know that the endowment is an investment asset. So when we put money into the endowment, you really get around 6 percent of that money back. The rest of it goes into investing. It talks about the types of income investing strategies that we use, which, to someone who’s interested in finance, [is] really cool. It talks about how aggressive we’re being, where we want to be. It doesn’t give a breakdown of the school’s stock portfolio by any means, but it gives us a good idea of the strategies we’re attempting to use to grow the endowment, and in all honesty the extent to which the university is satisfied with the amount of money we have. If you look at the forms, it’s a pretty aggressive strategy we’re using because they’re trying to grow it as quickly as possible.

SG: Yeah really. So in your Facebook post declaring your candidacy last month, you said “Let’s forget how we always used to do it.” What things do you want to leave in the past?

VU: So I think part of the resonance that we’ve brought into the answers so far is this idea of discussions. Not because I don’t like discussions. I’m in Student Life, we talk all the time. But at the heart of it, what ends up happening is we lose this bridge between what we’re doing in our major and what’s happening in the real world. We do stuff in class, but then we’re like 'Oh my god. One in five women are sexually assaulted on this campus. Too bad I can’t do anything about it,' which is really not even a little bit true. So how we used to do it was to sit in these two parallel worlds — the first in which we are students and the second in which we are members of community. But in reality we’re both. That’s what I want to forget: this idea that we’re separate selves. We are individuals experiencing the world and trying to make it better.

SG: How do you envision your weekly Tartan column? What do you want to communicate to the community?

AG: I think that’s a great opportunity to just describe the work that goes on that often times isn’t part of the students’ conversation. Issues we’re facing right now, like there’s a shortage in funding for the third floor of the [Cohon] Center to make that space adequate for students, [and] the issues that come up over time that show what we’re doing and why we’re doing it and show that we’re giving these decisions we’re making consideration from the perspective of a student.

VU: A really good example of that, that’s perhaps more sexy, is back [in] our freshman year, they tried to get the student body president paid through an honorarium. First of all, I’m 100 percent against that idea. But the biggest problem is that students didn’t hear about it. So I want to take these issues that are really big in Student Government, and say this is our position, this is what we want to do about it. Because after spending so much time in Student Government, I can promise you every week there is something new to talk about. It goes from working and deciding what the new student health insurance plan will be to paying Student Government officials.

AG: And even [things] like what’s going to go in the Skibo Café location. Things that most certainly have a day-to-day impact on students but they don’t understand who makes those decision and how.

SG: So do you want to publish it weekly?

SG: Awesome! We can talk about deadlines later. I just have one last question, which we’ve kind of touched on. But how do you plan to use your previous experience in Student Government to be a good president and vice president?

AG: So I think a lot of that comes down to like knowing what’s reasonable and what’s achievable. We’ve seen what’s been able to be done in the past and the discussions that happen with university officials. We have a good grasp on how processes work to achieve not only what we want to achieve but what the student body is pushing for.

VU: I think it’s important to note that we have these really lofty ideas, but we’re not being unreasonable in believing that they could happen within a year. Part of the reason for that is we have been in Student Government for so long so we know what’s achievable. But also have you seen that Jerry Seinfeld/Barack Obama interview? There’s this one part where he asked President Obama what it’s like working in government. President Obama said it’s like playing football. He was like 'What?' But the heart of it is, you spend all your time building up your resources so when there’s an opening you take it. And I think a lot of the flaws in SBP campaigns, not just this year but in previous years, is that they don’t try to find openings, they just assume they’re there. We know when to find the openings; we know how to stock our resources up so that we’re ready to take advantage of them when they come. Because of that our ambitions are based in a sort of realism rather than fantasy.