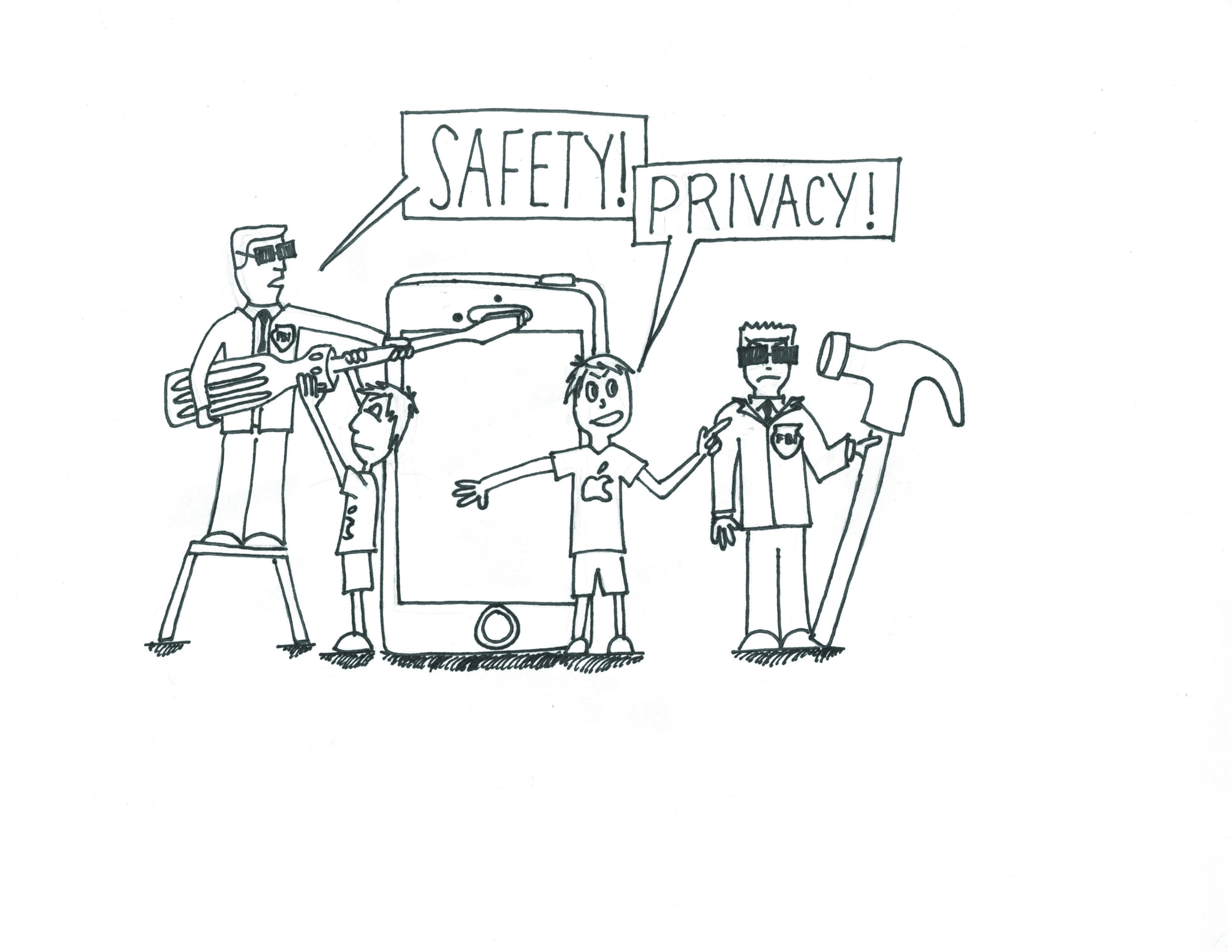 The San Bernardino terrorist attack was a tragic event, and we hope that nothing like it ever happens again. But what is the best way of preventing future terrorists? Is it possible to stay safe without giving up our own freedoms? When Apple publicly refused to help the FBI break into the iPhone used by one of the San Bernardino terrorists, the debate between freedom and security came back into the public spotlight. Last week, Pugwash discussed whether giving governments full access to information is the best way to protect our security.

Before touching on moral implications, some discussion took place as to what the FBI was asking of Apple. iPhones have a security system in place that makes it almost impossible to retrieve data after a certain number of wrong password attempts. The FBI wants Apple to disable this feature, which would allow the FBI to run every possible password until the correct one is found. Apple would have to create a special version of the operating system and then move it onto the phone as an update.

Is this a “backdoor,” or a term used to describe loopholes like master passwords or security risks that are intentionally left in by developers? Or is that word only being used because it has negative connotations and will win Apple support? Hard to tell, but either way, the FBI is asking Apple to weaken their product’s security in a way that could potentially spread beyond just this one instance.

The worry is that the new operating system without the security feature could be stolen from Apple, getting into the wrong hands and allowing anyone to break into iPhones.

Even if Apple manages to keep a tight hold on the weakened operating system, there are worrisome implications that come with it. If the government is allowed to force a technology company to let them into an individual’s phone in this case, what’s to say that they won’t keep coming back to the tech company and asking them to do it again and again and again.

One idea is that in this case, there is a clear need for it. There might be valuable data on the San Bernardino terrorist’s phone, and no one is harmed by this particular phone being cracked open.

There’s likely a warrant that makes the contents of the phone legally available to law enforcement, and it’s now just a question of practical possibility.
As long as the government requests and is approved for a warrant, maybe they should be allowed to access phones and other digital possessions.

However, just because they have a warrant doesn’t mean that it was necessary or carefully vetted. For example, there’s already a court that decides if surveillance requests or justified. Since its foundation in the 1970s, it’s only denied 12 of more than 35 thousand requests. As revealed in the Edward Snowden leaks, some of those requests included things like getting all call details from a phone service provider, for every day the phone was in use — something that many feel is far beyond any reasonable cause.

Regardless of warrants, the United States government has a long history of going beyond the law in the name of national security.

Even for Abraham Lincoln, often considered one of the greatest presidents, constitutional safeguards of liberty were thrown out the window when faced with threats to national security. More recently, in the civil rights era, government agencies used selective enforcement to target so-called “radicals.” If the government has the capability to do something, they will most likely choose to do it, regardless of the action’s level of legality.

In fact, the government has been forcing tech companies to do their bidding all along. The only reason it’s come to light now is because Apple has enough clout to publicly fight back. Smaller companies, like the email service that Edward Snowden used, folded under government pressure, allowing the government to spy on their services before eventually going out of business.

Even if consumers want more protection from the government and want to use businesses that support individual privacy, they can’t trust in smaller companies that provide those services because of the government’s power to strong-arm them.

And if the United States government sets (or has already set) a precedent of being able to break into phones and individual’s data, what does that mean abroad or on a global scene?

Protesters in oppressive regimes often rely on the privacy of their data to organize to better their country, but it seems hypocritical to support their right to privacy while denying that right within the United States.

Since 9/11 and the Patriot Act, the United States has swung heavily towards security on the pendulum between individual freedoms and security.

Apple’s refusal to the FBI may be step in the other direction, signaling a country tired of being afraid and no longer as fervent in its pursuit of security at all costs.

Student Pugwash is a non-advocacy, educational organization that discusses the implications of science. This article is a summary of last week’s discussion on privacy rights.