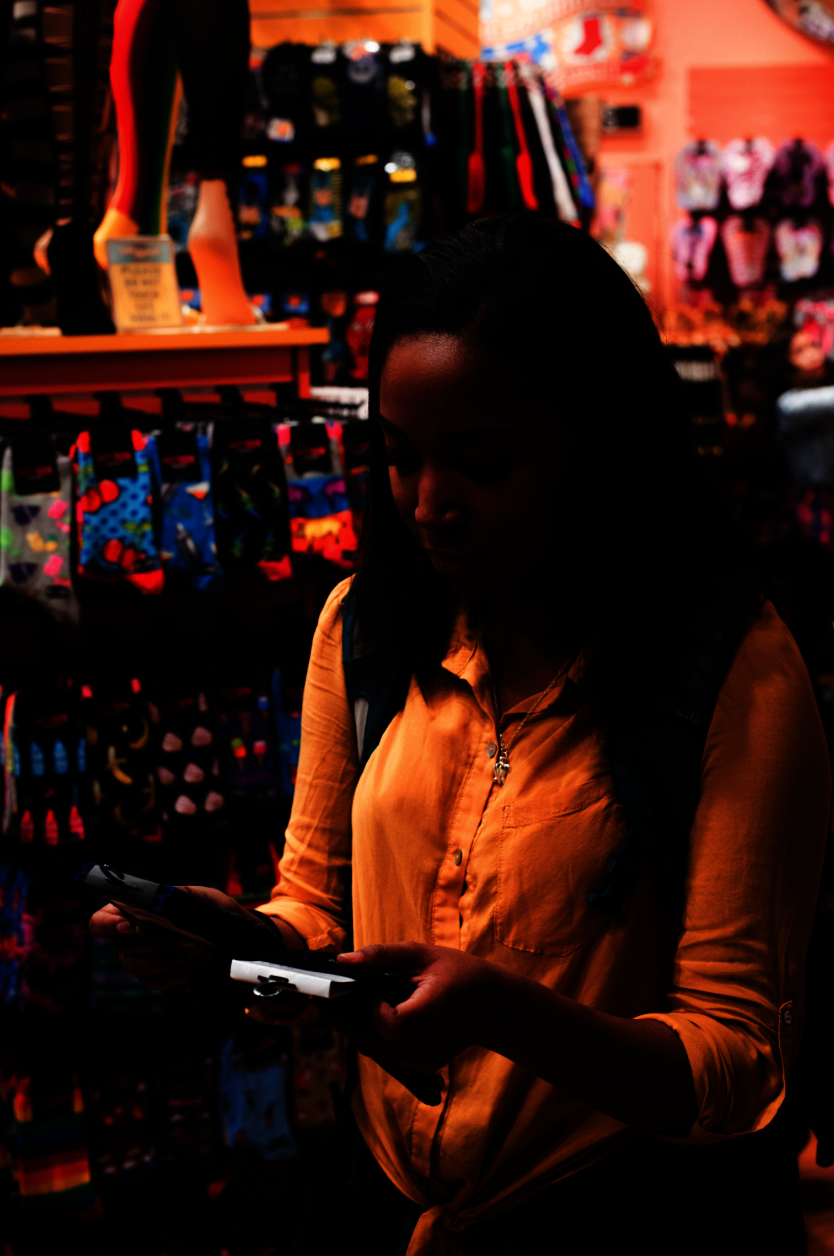 We hopped off the plane at LAX, with just a dream and a cardigan. "Welcome to the land of fame and sex," Jade said.

It was my first experience with time travel. We left Pittsburgh, PA at 6:45 a.m. Three hours, fifteen minutes, and 2,200 miles later, we arrived in Los Angeles, California, at 7 a.m. Having become accustomed to the cold, black void that is a Pennsylvania winter, I was immediately taken aback at the discovery that Los Angeles has been stockpiling all of the United States' sunlight reserves. Sunlight is vital to our survival; it feeds our plants and makes some people's skin change color sometimes. It's necessary. As hard-hitting investigative journalists, we decided to try our best to uncover what else this city has been hiding over the years.

In order to do this, we began interviewing the locals, Humans of New York-style. We asked them the tough questions, and we got some tough answers. First, we accosted a trio of youths at a local Starbucks about this very pressing issue. "What do you think about the fact that we only have 160 sunny days every year, while you have 284?" They simply looked at us through their Ray Bans and sipped their caramocha frappalattecciniatos in contempt. We poked them right in their washboard abs to make sure that these youths were real, not just some North Korean-style pageantry, but they just sipped their bourgeois coffee, their privilege intensifying. We decided that we were fighting a losing battle, so we made a hasty retreat.

We fled into a local eatery to avoid the prying eyes of the city's youth, but little did we know that our journalistic journey was not over. Not by a long shot. The restaurant was called Buca di Beppo, which translates roughly to Joe's Basement; literally to Giuseppe's Hole. It was neither a basement nor a hole, since we had to ascend a maze of stairs and corridors in order to find our table. Before we even got our menus open, we were greeted by an overjoyed woman who offered to take our picture. She posed us in a variety of ways, then left for a while. We wondered whether they were on to us — whether they were printing out those pictures to post on the L.A.'s Most Wanted List. The terror gradually faded, though, when our waiter came around. He warned us that the portions were super large — "Family Size," they called it. We had unwittingly stumbled onto another conspiracy. In order to investigate these tremendously large portions, we interviewed a nearby gaggle of women. I was unable to get a word in, since they were too invested in their discussion of the ocean, and how they lived so close that their lawns were basically pools, and how the air they woke up to was saltier than we were at hearing this. We never did get any of the answers we were looking for.

Overall, it was a fun time. We almost got kidnapped by Scientologists and pushed off a mountain, and we ate like the privileged youths we are. If I had to go back to L.A., it wouldn't be against my will.

As a native Texan and someone who’s spent their whole life in the South until recently, some things were a little bit less of a culture shock for me than for Josh. I’m used to warmer weather and in fact, California was a bit cooler than what I am used to in Texas for this time of the year. However, the weather seemed to be the only thing I was prepared for. There isn't anywhere quite like Los Angeles. I had only been here once before, and both times I expected to walk off the plane and instantly see celebrities in front of me. I guess I’ll have to hold out hope for whenever I go back because it didn't happen this time. I also expected to see the Hollywood sign as soon as I set foot out of the airport, which also didn't happen. Disappointed with my lack of celebrity and sign sightings, I gathered my things as Josh and I left the airport.

We did a lot of exciting things in Los Angeles, one of which was explore the Universal City Walk, which is where we went to the place that not only stole my heart, but also nearly caused me to go bankrupt: the Los Angeles Sock Market. I had never seen such a place, but as someone who prides themselves on their sock collection, I felt like a higher power had lead me there. It took a lot of self restraint for me to only leave with two pairs, one of which I bought for a friend. I quickly realized at the register, however, why California is called the Golden State. It’s because you need a gold brick to afford anything in that state. I’m also convinced that everyone there must actually grow money because that seems to be the only way to get by. However, Josh and I did not have enough time to investigate this claim so it’s still up for debate.

The most amazing thing I think we did while we were there was visit the Griffith Observatory. Upon arriving, another ton of bricks about the Hollywood sign was dropped on us. Contrary to popular belief (and by popular I mean Josh and I) the Hollywood sign DOES NOT LIGHT UP. When it's dark outside, it can't even be seen if you aren't really close. I figured something as iconic as the Hollywood sign would at least have one light on it, but alas there were none. So with heavy hearts, we continued our trek up the hill until we reached Griffith Observatory. There is one thing about this place that is characteristically un-Californian, it’s free. Not a single dollar is required for admittance which makes the whole experience ten times better.

The view of Los Angeles from the observatory is simply amazing. Downtown sprouts up like a weed among the backdrop of the rest of the city. I expected to see amazing sights here, but what I didn't expect was to run into a future celebrity. We met this little girl named Amy who is definitely going to be the next "it" girl in Los Angeles. Since this is California and everyone is an aspiring something, they all have agents. While Amy might have only been two, she already has an agent that she refers to as “dad” to keep things casual. It seemed like every part of the observatory we went to, we ran into Amy acting out of control and her agent trying to reason with her. I’m not sure what celebrity problem was fueling her meltdown, but her agent was not tolerating it. Josh and I were really honored to just be able to meet a little local celebrity, even if she had missed nap time.

Standing on top of that hill in that observatory, I had a moment of realization. I finally understood why despite how expensive it is and all the other chaos, people still flock there. Looking down on all the buildings that look like Lego bricks in the city where dreams are realized, it hit me that there's one magical thing that pulls people here from all over the world. No matter where you're from, there's one thing that will inevitably pull you here and that thing is