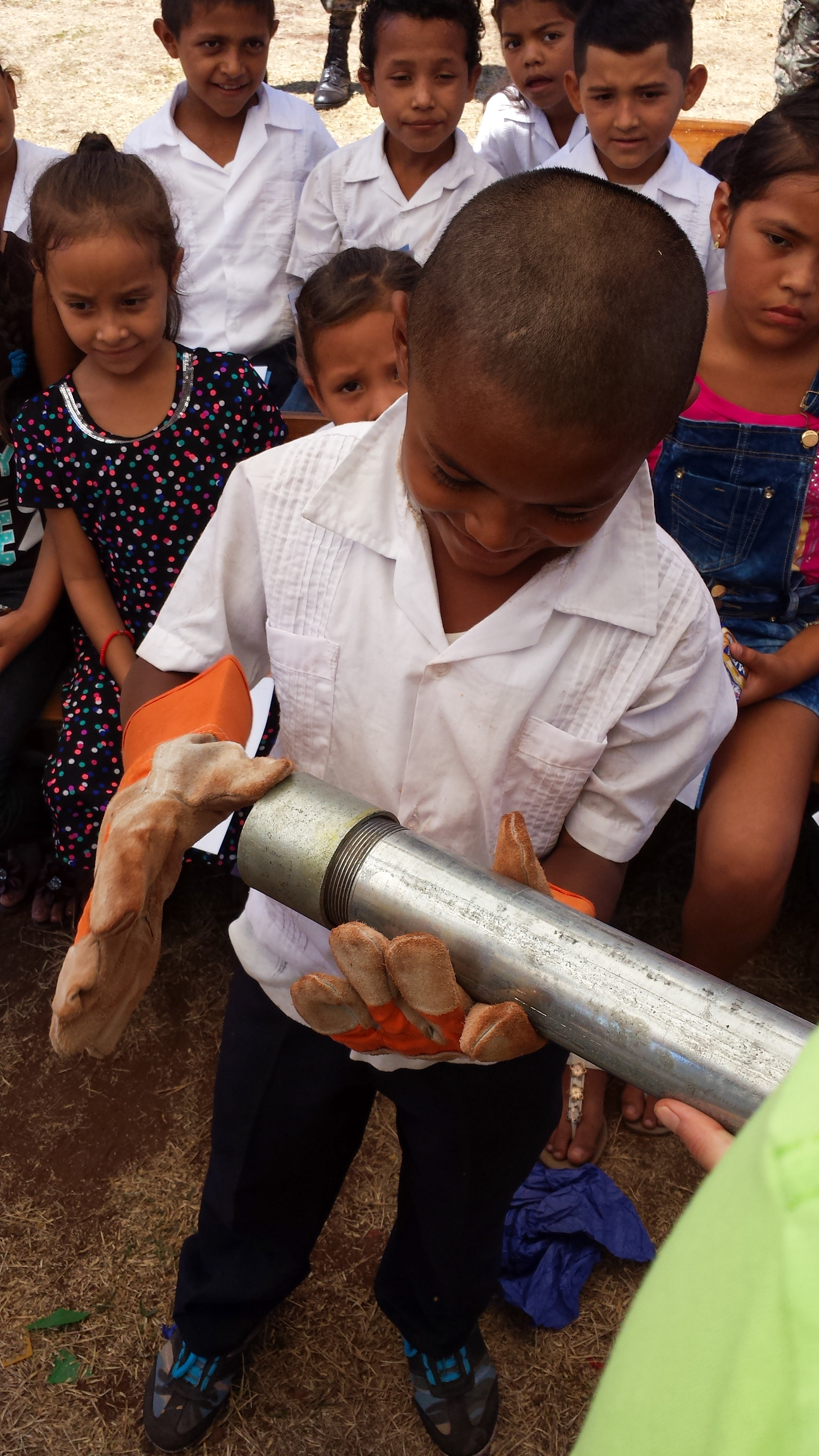 Members of the community that would be benefitted by the pipes and tanks project. (credit: Keval Gala/)

Spring break is a time for students to relax and refresh midway through the semester. Some go home and spend time with family and some visit friends at other universities. Others follow in the footsteps of the millions of college kids before them and make the boozy, MTV-esque pilgrimage to the warm beaches of the south. We decided to forgo the rest and relaxation and spend Spring Break 2K16 digging trenches in the hot and humid town of Los Huatales, Honduras.

We’re going to be brutally honest. This was not a trip we were looking forward to. After sitting through several Global Water Brigades meetings and learning all about the holistic model that the organization utilizes to help communities, we wondered what the hell we had gotten ourselves into. Global Water Brigades focuses on helping a community develop a project that will bring clean water to the community. We were excited about the opportunity to go out and make a difference in the lives of rural Honduras, but there were plenty of aspects making us nervous. We were about to be thrown into a culture we knew nothing about, with a language that we spoke little to none of, with a group we barely knew. The possibility of catching Zika was the least of our concerns.

It was 3:45 a.m. on the first Saturday of spring break. With our suitcases in one hand and all the optimism we could muster up in the other, we began our journey to Honduras. Our group arrived at the airport and boarded our first flight to Atlanta. With sleep in our eyes and fear still in our hearts, we boarded our second plane to San Salvador, El Salvador. Unbeknownst to our group, we were arriving in the country at the same time as the Iron Maiden, who is surprisingly adored by a large fan base in El Salvador. The chaos made leaving the airport all the more difficult. We eventually made it out and began our scenic five hour car ride to San Lorenzo, Honduras.

After traveling for almost fifteen hours, we finally reached the compound that we would be staying in. We were immediately welcomed in by the aromas of traditional Honduran food. We quickly realized that the food was going to be one of our favorite things about our trip, especially the fruit, which was always fresh and never once looked as sad as the fruit in Entropy. After dinner, we had time to settle into our rooms and prepare ourselves for the hard week of work that was ahead of us.

After an exhausting first day of traveling, our 7:30 a.m. alarms hit us pretty hard. We got up, ate breakfast with the rest of our group, and got ready to meet the members of the community that we would be working with. The drive to the community was about 45 minutes, half of which was spent on a rocky, unpaved road, which made for a very bumpy ride. We arrived in Los Huatales and were greeted by the Basic Sanitation Committee and the Water Council, both of which are comprised of community members who volunteered to serve a liaisons between Global Water Brigades and their fellow community members. Following this meeting, members of the community allowed us to visit their homes and see their current living conditions. Many of the homes were small and made of clay and tree branches. The community members explained how they had to walk several kilometers multiple times a day just to access water. Despite not having much, the people were still so optimistic and ready to work with us. We couldn't leave a home without the occupants telling us that they hope God blesses us in everything we do. The optimism of the community members and their well wishes were enough to get us through digging a million trenches.

We woke up the next morning with the words of the community members echoing in our heads and a completely different outlook on the trip. We were as ready as we ever would be to begin digging trenches where the pipes the that would bring clean water to the town would be laid down in. As we made our way out to the digging site, we immediately knew this would not be an even remotely easy task. It was a smoldering 91 degrees with high humidity. The sun was unrelenting. There were very few shady areas. The ground was purely clay and rocks, and the digging was made all the more difficult because we were on the face of a steep mountain covered in thorny bushes. After a few hours of digging, what seemed like the only cloud in all of Honduras finally graced our presence. Unfortunately, the cloud left as quickly as it came, and it was back to digging under the sun once again. As a group of students who spend most of their time studying, you can safely assume that we didn’t have a lot of experience with manual labor. Needless to say, working on the trenches kicked our asses. As the first day winded down we looked around at our progress and knew we had a long way to go. Supplying clean water to an entire community is no easy job. On the way back to the compound, the same rocky road that tormented us on the way to the village lulled us to sleep after a long day of work.

After a couple days of extremely hard labor, we attended a fair focused on teaching the children of the community about the water project. It is Global Brigade’s goal to make the communities sustainable, and educating the children plays a major role in the long term success of each of the projects. Following the educational fair, the community members and the students from the various attending universities performed together in a cultural exchange. Children from local schools performed songs and dances native to Honduras. We, as a varied group of Americans, had to rely on pop-culture dance crazes circa the early 2000s. Naturally, the “Cha Cha Slide” and “Cupid Shuffle” were already taken, so our group took it way back to 1995 with a classic — “Cotton Eye Joe." The cultural exchange was the highlight of our trip, and not just because we got a break from pickaxing in the sun. We got to experience Honduran culture first hand with our group members who, over the course of this trip, became our close friends.

The last night of our trip was an emotional one, as we reflected on the previous week. Looking back on the beginning of this trip, it’s hard to believe that we were so hesitant in coming. In every sense of the world, our trip to Honduras with the Carnegie Mellon chapter of Global Water Brigades was amazing. We pickaxed a lot. We sweated a lot. But most importantly, we learned a lot. We learned so much more from the people of Honduras than they could’ve ever learned from us. It’s impossible to share all of what we’ve learned on our journey to Los Huatales, but some of the wisdom deserves to be shared.

We learned what it truly means to be grateful for something. There is so much in life that we take for granted. We complain about trivial issues when there are people all over the world without access to clean water. The trip really put that into perspective for us.

We learned that the barriers built up by cultural variations and language differences don’t stand a chance against the driving forces of kindness, generosity, and the pure joy of dancing and singing. We learned that giving your time to help others is one the greatest things one can do. One of our translators on the trip, Mario, left us with this quote: “Money is not the most important currency. The most important currency is time. Do not be stingy with your time.”

Oh, and we also learned that Honduras has way better fruit than America.