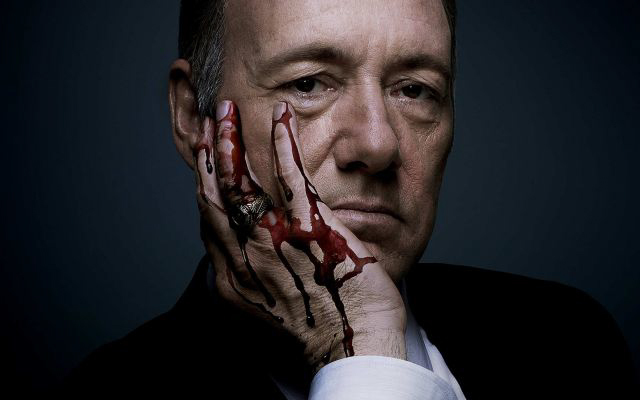 Kevin Spacey plays Frank Underwood, a ruthless but brilliant politician who will stop at nothing in his quest for power.

This was it. This is the season of Beau Willimon's House of Cards that sealed it into the hallowed halls of television history. The one that proves that the show is not just an erratic phenomenon, but a slow, pulsing story that shapes the way that we think about politics and the actors behind them. After season three, I was worried. It was showy, dramatic, and over-the-top, and I was left wondering how much longer I could watch these people have no consequences for their actions. The show had reached my limit, and I stopped believing in it.

But then, season four happened. Maybe it's that we're in the middle of an already outrageous election season. Maybe it's that the show had already been renewed for a fifth season. Whatever it is, something about season four made me feel like House of Cards was back with a vengeance. The show opens with a refocus on Lucas Goodwin, the spurned ex-journalist who is still in jail, but is now working for the government. Bringing back a character who got lost in the shuffle of season three was a bold move, but it set the tone for the rest of the season.

With characters like Goodwin, Zoe Barnes, Peter Russo, Tom Hammerschmidt, and Tom Yates coming back into play (albeit some in hallucinations), the series felt like it was referencing its roots and coming full circle as well as adding a sense of closure. However, this season also added new characters that became central to both the plot and the development of the characters whom we had already met. In a brilliant addition, this season introduces Claire Underwood's mother, Ellen Burstyn's Elizabeth Hale. Their relationship reveals a more nuanced side of Claire Underwood's character, as well as giving us more background on the Underwood's relationship than we have ever had before in the show.

Joel Kinnaman's Will Conway, the Republican candidate in the fictitious 2016 election, and his charming family are other additions to the show this season. As Frank Underwood preys on fellow Democratic hopeful and returning character Heather Dunbar, Conway presents another stark contrast to Frank, both in methodology and attitude.

Though it had more of a cohesive thread to the rest of the series, season four also had its share of shocking moments that kept true to the show's infamous reputation. From the near assassination of Frank Underwood, to Edward Meechum's death, to the open Democratic convention, the stakes continue to climb higher and higher. The beauty of this show, though, is that we as an audience are willing to sit and watch as it gently nudges the boundaries of believability, buying into every plot line and allowing our anxiety to heighten.

The most beautiful moments of the show happen when we least expect them: Frank Underwood finding that Meechum's handprint he had drawn behind a painting had been covered up, Frank Underwood and Claire Underwood taking the stage after being nominated as presidential and vice presidential candidates respectively at the DNC, the determination of Hammerschmidt's quest to validate Goodwin's story and prove that Frank Underwood really did kill people, and perhaps most notable of all, Frank Underwood's threat to Durant.

In the most chilling moment of the show so far, Durant tries to stand up to Frank Underwood and seize the Democratic nomination for herself after finding out that Frank Underwood and Claire Underwood had stabbed her in the back. Frank Underwood jovially picks up a letter opener, tells Durant the whole story about killing Zoe and Peter, and that he'll kill her too. Then he laughs, tells her he's kidding, and asks her to reconsider.

In that moment, you realize how powerful the show is. To capture the attention of an entire nation for thirteen hours so that they can watch a pretend election while a real one is happening is no small task, and House of Cards does it with substance and style to spare.