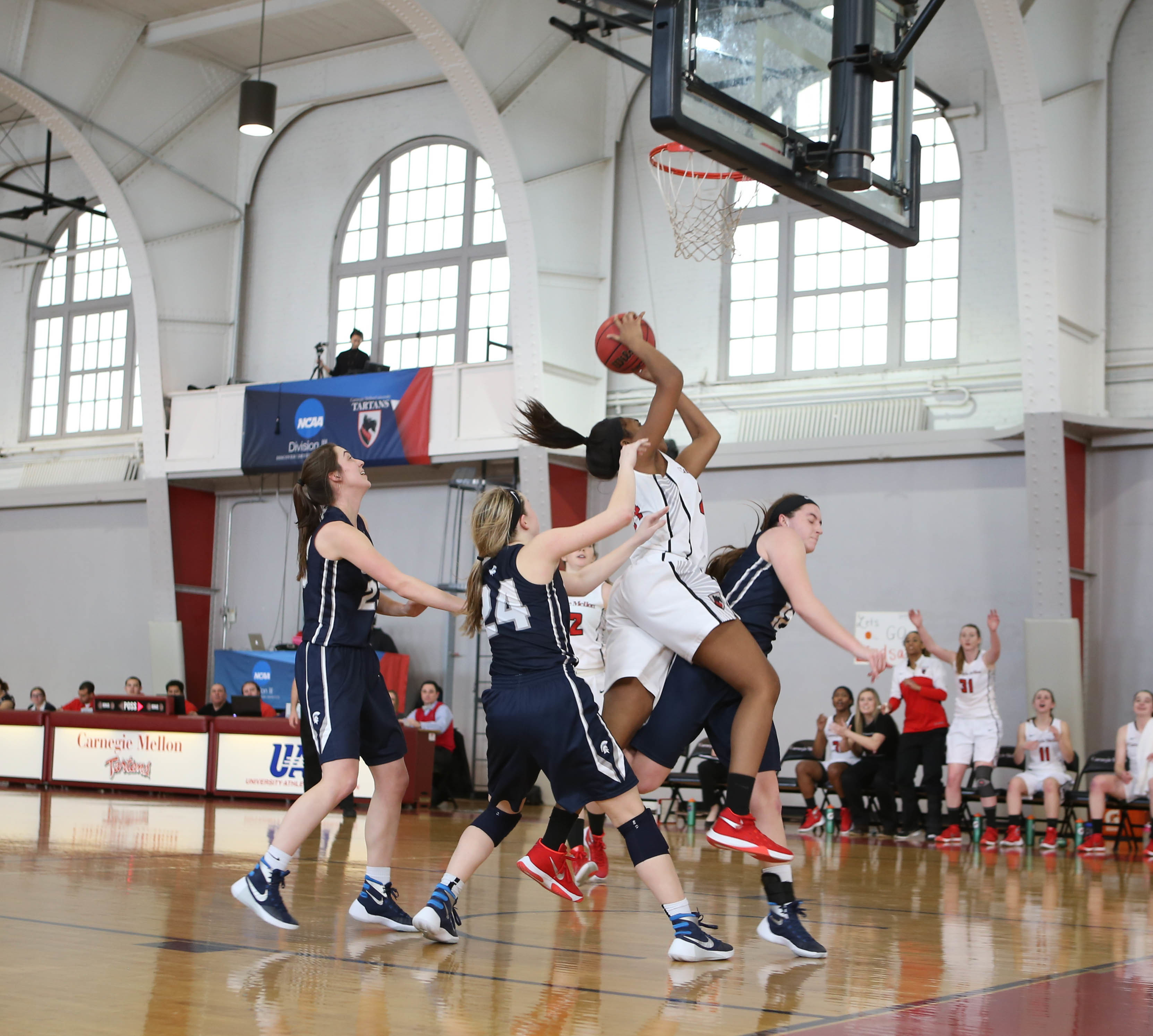 Carnegie Mellon junior forward Uzoma Nwankwo drives through the lane and leaps to the basket on Saturday. (credit: Stefen Zhu/)

The Carnegie Mellon women’s basketball team played their season finale against Case Western Reserve University on Saturday. The Tartans finished the season with an 83–49 victory, closing out the season 19–6 overall and 8–6 in the University Athletic Association (UAA) play.

In the second quarter, the Spartans committed three straight turnovers as the Tartans continued to build their lead. Though Case Western was able to score several shots afterward, Murphy continued to make baskets for the Tartans, taking advantage of aggressive Spartan defense by drawing fouls. Her 16 points during the quarter gave the Tartans a comfortable margin, attracting more attention during the points in the game when she outscored the entire Spartan team. As Case Western tried to tighten up against Murphy, several Tartans were able to take advantage of the distraction by driving for layups, keeping the Spartan defense off balance as the Tartans entered halftime with a 44–26 lead.

In the third quarter, the Spartans tightened up their defensive play during the time when Murphy was given time to rest on the bench. However, Tartan offensive production continued to keep the Spartans at bay, ending up with a 64–42 lead.

The fourth quarter saw the Tartans continue to dominate against the Spartans. Murphy continued to play at a high level, bowing out when victory became certain as the spotlight shifted to Poss and Otto in their final regular season game.

The Tartans shot 53.3 percent from the floor and held the Spartans to a 27.1 percent effort. Carnegie Mellon also earned more rebounds, marking 53 in comparison to Case Western’s 30. The Tartans’ 13 offensive rebounds led to 19 second-chance points. Murphy finished with 36 points, just one point below her career high. With 12 rebounds in the game, she also obtained her 13th double-double of the season. Otto closed the game with 17 points, eight rebounds and five assists. Poss added 16 points for the Tartans.

The Tartans have definitely had a season to remember. Though the team had gone through a stretch of losing six conference games in nine tries, the Tartans remained resilient, closing out the season with strong wins against Emory University, the University of Rochester, and Case Western. Serving as a beacon during good times and bad, Murphy has been the dominant force for the Tartans, commanding the attention of opposing teams all season long with her team leading 23.7 points per game, despite never having attempted a three-point field goal in her career. Murphy’s season totals include 592 points scored, 228 field goals made, and 75.2 percent in field goal percentage, breaking her previous marks in these categories. Her 136 free throws came close to matching her best last year, and her 173 free throw attempts came close to matching her first-year production.

Junior Jackie Hudepohl has also been a strong player for the Tartans at guard. Averaging 15.2 points per game and making 76.8 of her shots, Hudepohl has performed excellently week in and week out. Otto and Poss have both done well this season, performing as consistently as they have during their collegiate careers. First-year guard Jenn Mayberger looks to be a strong force for the Tartan defense going forward.
The Tartans now await their playoff fate as they hope to compete for the 2016 NCAA Division III Women’s Basketball Championship.