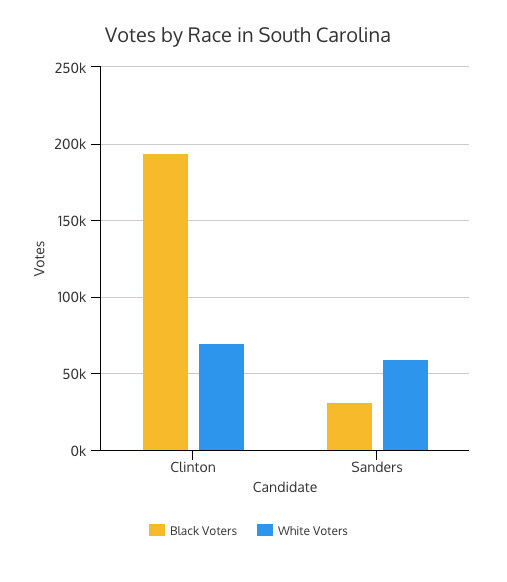 There were not enough participants in exit polls to account for voters who are neither white nor black. (credit: /Senior Staff, Created on Venngage)

The rapidly approaching U.S. presidential election has candidates brawling harder than ever for the Democratic nomination. Last week, candidates fought to win over South Carolina voters before the weekend’s primaries.

The Democratic Party has produced two very distinct candidates: Senator Bernie Sanders (I-VT) and former Secretary of State Hillary Clinton. Both Sanders and Clinton are backed by massive groups of polarized supporters, each pushing hard for their candidate’s nomination.

On Feb. 23, four days before the primary, Sanders and Clinton arrived in Columbia, South Carolina for CNN’s Democratic Town Hall.

Sanders began the town hall by stressing the first difference between his campaign and Clinton’s: campaign donors.

Clinton, on the other hand, accepted hundreds of thousands of dollars in donations from corporations. Clinton’s top campaign donors include Goldman Sachs, J.P. Morgan, and Morgan Stanley.
To open, Sanders called upon Clinton to release transcripts of the paid speeches she made to Wall Street banks, a request she had previously avoided answering.

Sanders also emphasized that he had never received such donations. He added, “I am happy to release all of my paid speeches to Wall Street — here it is,” and motioned towards an empty space and said, “there ain’t none.”

Clinton curbed the request again, maintaining that she would only release her transcripts if other candidates released theirs as well. She then asserted that the pressing issue was not the issue of the transcripts, but of which candidate presents the best plan to regulate Wall Street.

Most notably, Sanders and Clinton differed in the way they spoke about racial issues in the United States.

Sanders emphasized the need of reform in the criminal justice and education systems. He advocated for increased funding for historically black colleges and universities.
Clinton instead retold stories from the audience. She recognized a group of women from the audience who lost children because of police brutality and gun violence, addressing broader issues affecting the country.

Clinton’s message appears to have hit home. She managed to receive the support of 86 percent of black voters. Since 61 percent of voters in the primary were black, that was sufficient to clear the necessary threshold without supporters of any other race. Clinton was competitive among non-black voters as well, though, and cruised to a 50 point walloping of Sanders. 61 percent of Sanders’ supporters were white, which put a low ceiling on Sanders support in a state where white voters made up 35 percent of voters. Clinton took 39 of the 53 pledged delegates up for grabs.