Exhibit raises the bar at the Frame Gallery 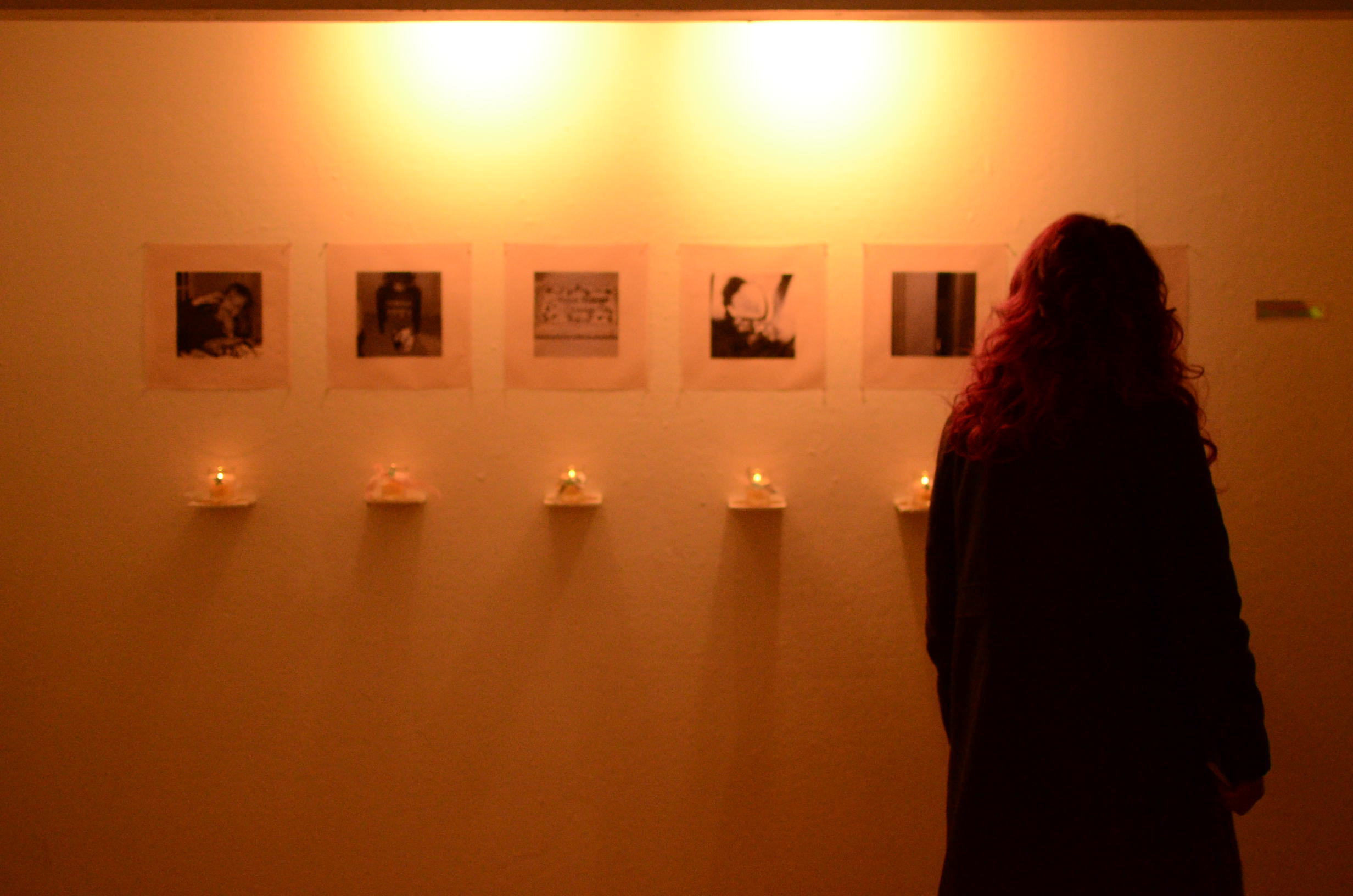 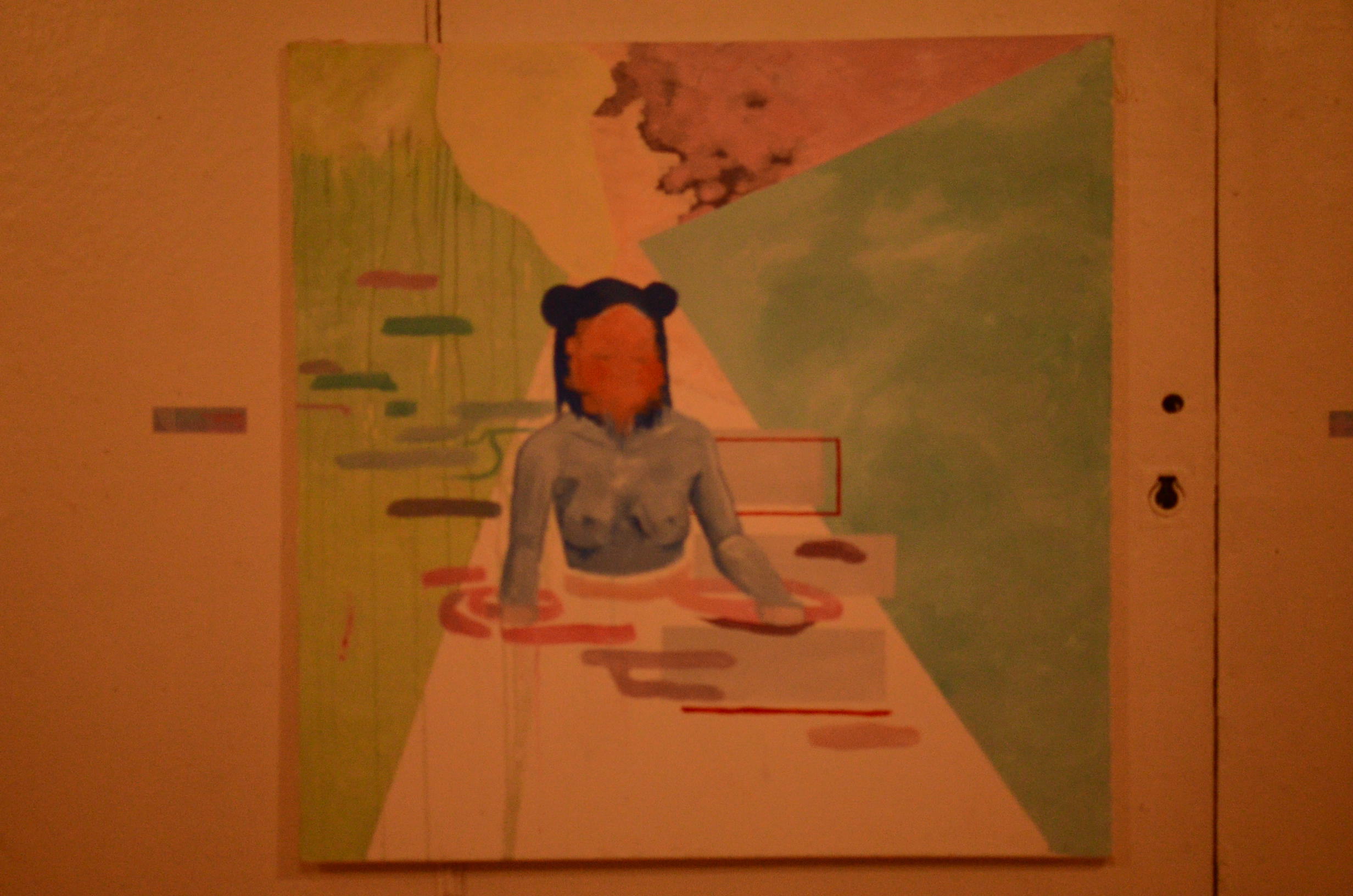 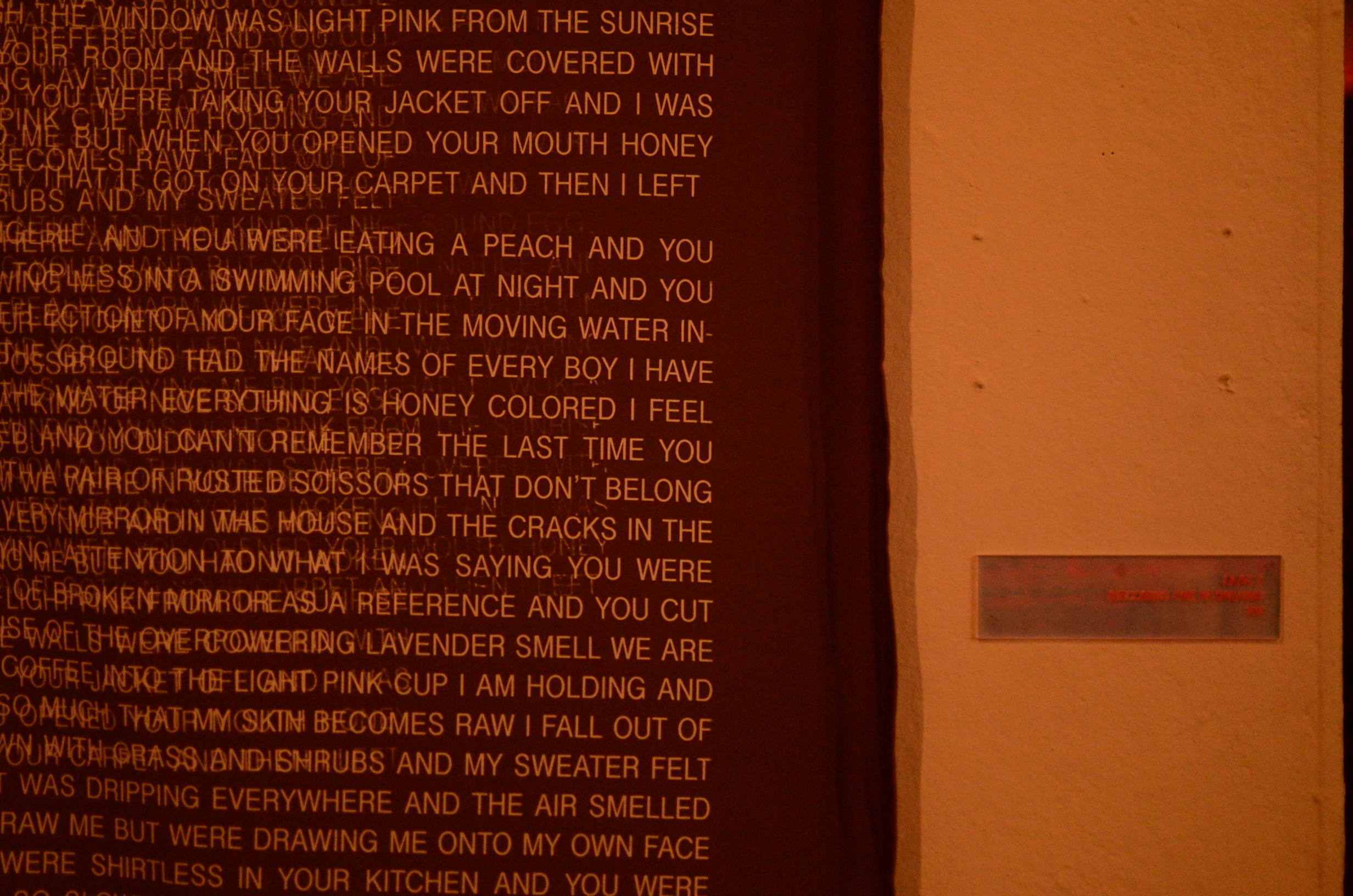 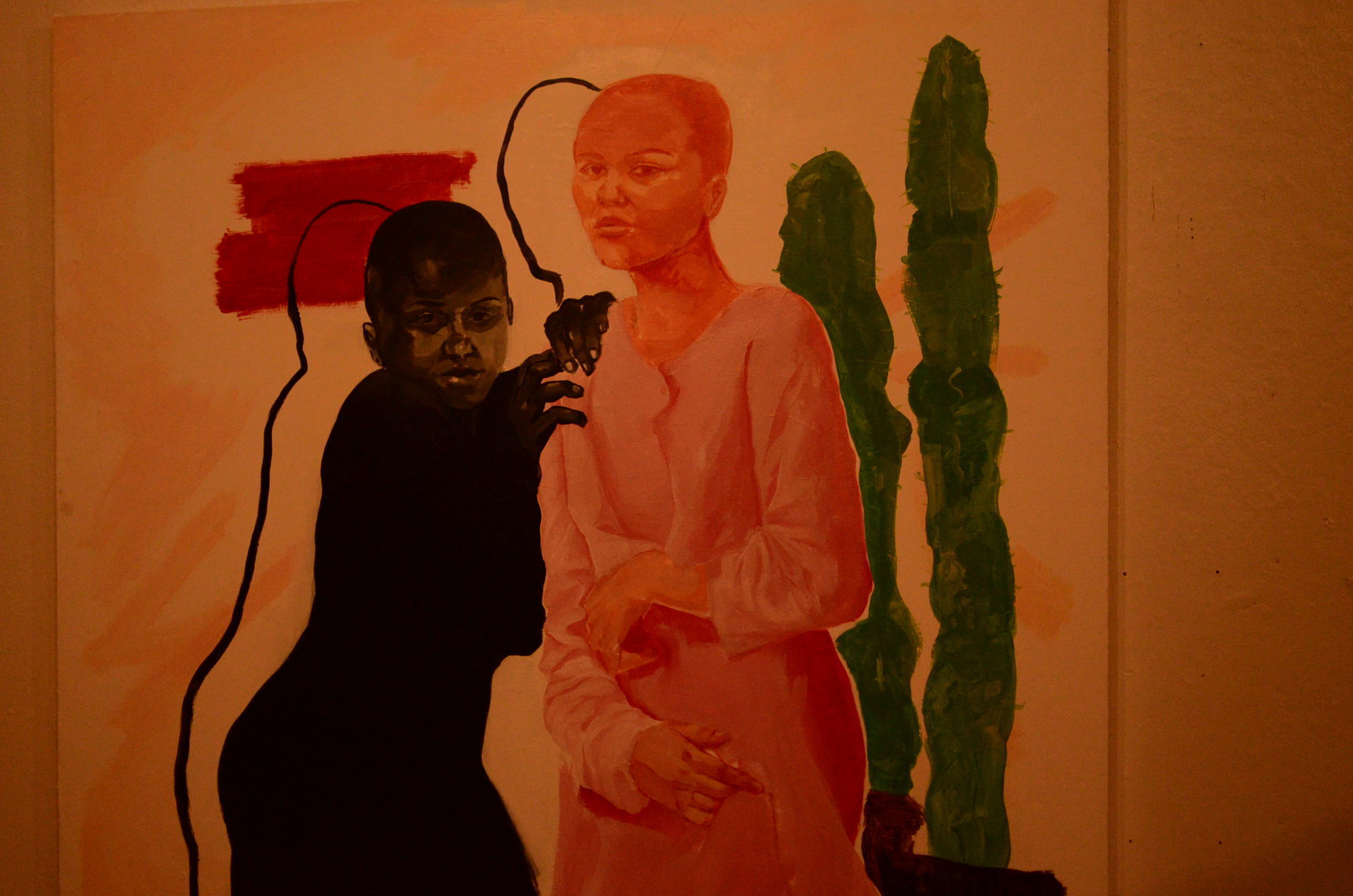 The experience of teenage girls is often oversimplified or relegated to chick flicks, pop music, and tumblr. On Friday night, however, the new Frame show On Becoming gave this group their due, spotlighting the young, modern, female experience with soft lighting and glittering gauze. Each piece of art was deeply personal yet universal and came together cohesively. Somehow even the snacks, red velvet cupcakes and pink lemonade, seemed to match the ethereal color pallet. Standing amidst the crush of trendy fur coats and listening to the excited buzz of voices, it felt like opening night at a professional gallery.

On Becoming is the brainchild of sophomore art major Paola Mathus, sophomore BXA with gender studies major Jenna Houston, sophomore BXA with computer science major Kate Werth, and sophomore BXA with Logic and Computation major Toni James. Houston laid out the basic premise of the show, saying “it’s about the period of development between 13 and 22 for anyone female identified. And so I think we were thinking about things like changing into new bodies, relationships, I guess the beginnings of romantic relationships, and also how the Internet impacts those things.” Each artist took the basic concept and ran with it, resulting in a multifaceted show that spans interpretations and media, with printmaking, animation, painting, videography, and photography all making an appearance.

When I first stepped into the gallery, I was immediately drawn to one of Houston’s pieces in the back corner of the room. Simple and almost colorless, the piece, titled “Myself as her Doll, Myself as my Doll,” is a series of six photographs lined up on white backgrounds, with lit candles underneath each one. The candles have pastel ribbons tied around their holders, and the whole piece evokes the aura of a child’s memorial and seems somewhat ‘old-fashioned.’ A picture of a birthday cake with “Happy Birthday, Jenna” scrawled across lets us know we are peering into Houston’s childhood. The piece conjures a profound sense of loss, even though the girl in the photos is only standing on the other side of the room.

This piece played well with the piece beside it, a projection by James of sketched faces blinking in and out of existence. The faces are each unique, but fail to leave much of an impression as they disappear. James said the work was, “about people who come and go in life. Just like a simple representation of that, and [it] tries to kind of capture a similar type of indifference towards that.” The two pieces, along with James’s other animation about losing her favorite hideaway spot, put an interesting lens on On Becoming, highlighting what is lost or left behind in the process of becoming a woman in today’s society. They were emotive and subtle, the kind of pieces that bubble up in your consciousness weeks later. They were striking precisely because of the indifference James mentioned. There was no clear-cut message or single emotion, and instead the viewer had to grapple with a strange tangle of feelings that were much more human.

The other works in the show were less retrospective. Werth’s work focuses more on the experience of relationships, using printmaking and text to explore romantic connections in the 21st century. One piece of her’s is emblematic of her work in this show. It consists of a paragraph of poetic text printed repeatedly in white ink on a dark purple sheet. In places the text has been layered beyond recognition, in others it’s as crisp as a page in a book. The text, according to Werth, is, “all dreams I’ve had while I was sleeping alone and just kind of missing the person I was in a relationship with.” With its evocative imagery and thoughtful medium choice, the piece exemplifies her collection of strong, professional grade work. Her work gave the whole show a clear narrative.

Mathus’ work spanned the back wall of the gallery, and her paintings were the gravitational center of the space with their bold colors and clean composition. Her two most engaging pieces were self-portraits. They both depicted the artist, but that was where the similarities ended. One was stark, with only a single, completely black figure sitting curled up in the middle of a blank white canvas. The other was painted in pale pastels, with an overlay of abstract shapes and glitter. The juxtaposition between these two paintings highlights a complicated idea Mathus brings up in this show. She has been focusing on the self-portrait, because “as a visual artist and as a painter I feel like visuals and identity have just merged together into this really strange, single form of identification for myself … I feel like having just a visual portrait of yourself is such a strange idea to me, and playing along those terms I feel like any of the portraits I make end up being different iterations of what myself and what a portrait and what my art could ever be.” Her paintings were perhaps the most difficult and inaccessible pieces at the show, but were also conceptually interesting and complex. What makes them difficult to digest is the level of ambiguity in them. They seem to contain more questions than answers, and that makes them a fascinating experience.

The back room of the gallery held Houston’s second piece, a two panel video of her, dressed in her underwear, putting Disney princess temporary tattoos on herself and scratching them off. On the surface the piece seemed blatant — female sexualization is hardly a new topic — but while the broad topic may be overplayed, Houston’s specific angle was engaging and fresh. The piece explores the actual physicality of the body, and how “at this age [women] begin to become sexualized by media, other people, themselves, any of those things. And yet it’s also the time when you have, when you personally find the most flaws with your body.” It explores “the juxtaposition of a marred body versus a sexualized one.” The concept of self-sexualization, even in the face of personal insecurity, was shrewdly illustrated by the voyeuristic, yet hesitant feeling of the videos, and the fact that Houston herself was the subject matter.

Mathus summed up the artist’s different takes on the subject of female coming of age in the 21st century, saying, “I think we all evolve through very different ways. Like Jenna’s visual representations and social and cultural stigmas and these different subjects, and Toni's a lot about these retrospective moments, and Kate focuses on the relational and … you putting yourself along with technology and the real world into these relationships. So we’re all focusing on very different works.” Mathus’ own work seems to focus on personal identity and the conception of the self.

The girls also have diverging conceptions about what they want people to take away from the show. James says she hopes to give people, “understanding … or just a glimpse as to what it is [like for girls at that age]. I think what this gallery does is kind of put people in that place themselves, where as maybe before they couldn’t.” Houston’s goal differed slightly because “a lot of the work I do make is for that group. Despite the fact that we’re trying to put other people in that place, I think I’m also trying to bring people who are in that place, some of their things to light, because I feel like sometimes they’re not.”

Mathus came into the show from a different direction. For her, “it’s not necessarily about you having to put yourself in my shoes, but this is what I’m experiencing, this is what I’m living, and these are the things I’m thinking about and considering, and it’s … not necessarily to put themselves in my shoes, but more to just see what my shoes are.”

Despite these differences, the four girls seem to work together effortlessly. Without coordinating they all arrived in a similar color scheme (mostly soft or dusty purples, pinks, and blues) and aesthetic. In a show full of glitter, bows, and Disney princesses, some people might call them out for falling back on the generically feminine. Mathus counters this conception, saying, “at first we were like, we all love these colors and these things but we don’t want to be pigeon holed by stereotypes or clichéd concepts of what ‘girl’ is. But then we realized, no, we just like these things and it doesn’t matter if they fall under these ideas. It’s who we are and what our art looks like.” The effect is an unabashedly honest show.

With a group of artists that click so well, I would have liked to see more intermixing of their pieces. Their different conceptions of what it means to “become” in this day and age played off of each other well, yet the curating of the show kept each artist and concept separate. The placement of Houston’s memorial and James’ animations was a brilliant move, and I would have liked to see that spirit carried throughout the space.

On the surface, these clear motifs may seem heavy-handed, but as you spend time with each piece and with the show as a whole, the unique, personal angle becomes clear. I will keep returning to Werth’s poetic descriptions and James’ nostalgic animations for a long time. I have already had several illuminating conversations about Mathus’ and Houston’s work as I try to unpack the questions they raised.

By the time this hits stands, On Becoming will be no more. The impression it made, however, remains. This show has raised the bar for exhibits at The Frame. Jenna Houston, Paola Mathus, Kate Werth, and Toni James are all artists worth keeping an eye on.